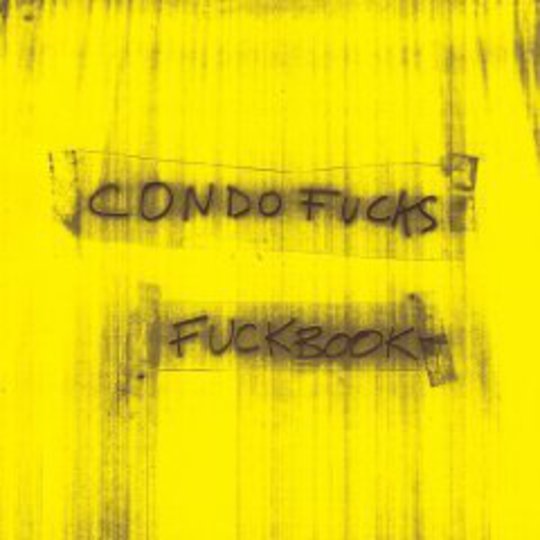 Essentially a threadbare pantomime horse yanked over the heads of Yo La Tengo’s James McNew, Georgia Hubley and Ira Kaplan, Condo Fucks aren’t fooling anyone. Probably. All the same, just in case of confusion, the promo copy of Fuckbook comes slapped with a sticker bearing the smirkingly faux-earnest declaration that ‘This is not the new Yo La Tengo album’. To be fair, the sticker tells it like it is: despite having identical personnel at the tiller, Fuckbook is to most YLT records as bathtub gin is to a delicate blend of exotic herbal teas.

It doesn’t take long for the first waves of intoxication (read giddy euphoria coupled with mild disorientation) to kick in, via a hiccuping false start that eventually erupts into a lolloping, red-raw cover of Small Faces’ 'Wat’cha Gonna Do About It'. Despite its rusted guitar snarl and down-mixed vocals seemingly barked through a gobful of tracing paper, it’s a reasonably straight version - albeit one that lurches drunkenly at your face before collapsing in a mewling tantrum of feedback, then twitching out the remainder of its sub-three-minute run time lying face down in the gutter. A quick ‘onetwothreefour’ later and, without pause to hitch our britches, we’re straight into an equally febrile stomp through Electric Eels’ glam-punk mini-anthem, 'Accident'. Which, as performed by Yo La Tengo in this guise, is actually more or less indistinguishable from the impressively down-at-heel original. Is there a wider ‘point’ to it, given such overwhelming similitude? Probably not. Is it massively fun? Yes. Yes it bloody well is.

This dishevelled opening salvo pretty much sets the tone for the remaining nine tracks, all of which are also covers. Highlights include 'With A Girl Like You' by The Troggs, on which Hubley’s barely-there vocal occasionally twinkles through the ripped-up overdrive like a smile through broken teeth, followed by an infectiously frenzied take on Richard Hell & The Voidoids’ 'The Kid With The Replaceable Head'. Elsewhere, even Slade get an airing ('Gudbuy t’Jane') alongside The Kinks ('This Is Where I Belong'), The Flamin’ Groovies ('Dog Meat') and The Young Rascals ('Come On Up').

The wholly writing-free nature of Fuckbook won’t come as any huge shocker to Yo La Tengo devotees - particularly not to owners of its PG-rated third cousin once removed, 1990’s equally covers-reliant Fakebook - but the prevailing Condo Fucks vibe might raise a few eyebrows. With the exception of a jerky, spaz-surf crack at The Beach Boys’ 'Shut Down Part 2' (here resembling an organ jingle from some zombie hockey rink), the whole lot was put down in a single live session, with edits, overdubs and evidently mixing kept to an absolute minimum. The result is what you might get if you forced The Detroit Cobras to ad-lib an album on an over-cranked treadmill at gunpoint.

And yet utterly tossed-off as Fuckbook inevitably feels, it somehow makes for a powerfully cohesive blast of sheer noise-drunk exuberance. There’s a feral, essential quality to these irreverent homages that manages to distil something genuinely pungent and punchy from what could so easily - even in the hands of such seasoned cover-version connoisseurs - have been a rather watery gap-filler of a release. There’s genuine replay value here, even if the recording of it took about half as long as the convoluted fictional biography (complete with Photoshopped fake album covers) in the liner notes.

Fuckbook could, in many ways, be construed as the perfect concept album for the bleak ravages of our incomprehensible financial apocalypse: a profoundly arbitrary fistful of dimly-remembered (as much by Condo Fucks as by us; at least, that’s what they want you to think) garage rock stocking-fillers, clattered out with a cheeky shrug of good-natured nihilism that says nothing quite so emphatically as ‘meh, bollocks...have this’. And yet, like The A-Team managing to fashion a rickety but effective speedboat-cum-rocket-launcher from discarded soup tins and bits of old washing line, the Condo Fucks pull it off. I love it when a plan comes together; even more so when there apparently wasn’t much of a plan in the first place.