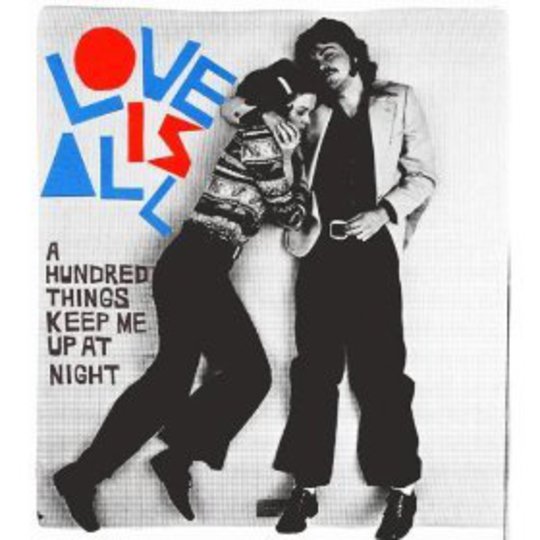 It’s possible I’m jeopardising my immortal soul just by writing the words ‘sax-driven twee’, so fuck knows what Gothenburg quintet Love Is All were thinking when they actually tried to make the stuff.

But gosh darn it, they pulled it off: instead of condemning the band to the torments of Hades, debut album Nine Times That Same Song was an ebullient burst of noise and confusion, the base elements of twee – lo-fi aesthetic, lovelorn confusion, self-depreciation – spun into something utterly berserk.

The key was the sheer lack of calculation: so many twee acts are painfully self-conscious, but this was a tumultuous outpouring of raw, feral instinct, singer Josephine Olausson engaging with the oddest of subjects with kamikaze abandon, saxophonist Fredrik Eriksson’s seemingly solely set on making as much noise as possible.

And, of course, creatures of instinct are creatures of habit, meaning it’s not exactly a shocker that Love Is All’s second album sounds broadly identical to its predecessor. Eriksson is actually gone, but you can hardly tell thanks to new recruit Åke Strömer, presumably Gothenburg’s other indie sax player. You can certainly allow yourself a wry smile at the fact A Hundred Things Keep Me Up All Night's opener is entitled ‘New Beginnings’. A skronking jetstream of high-velocity brass and enthused guitars that commences with Olausson yelping the words “I wear my brand new shoes, so my body’s one big bruise”, it could scarcely be more quintessentially Love Is All had they kicked off the record with a cover of ‘Make Out, Fall Out, Make Up’.

Which is fine, because progress isn't so important when you’re dealing with a band that's all heart, guts and momentum. Still, there’s no denying that deep down most people would like their heroes to give the impression of forward movement, and truthfully A Hundred Things Keeps Me Up At Night falls down a little simply because the energy levels have trailed off just a tad since their debut. It’s not that the record sound tired, just that there’s nothing that quite smacks into you with the ‘what the fuck is wrong with these people?’ force of ‘Talk Talk Talk Talk’ or ‘Ageing Had Never Been His Friend’.

This does nothing to alter the fact Love Is All write amazing pop songs, ones that that don't sound like anybody else's pop songs. The clearly not right in the head Olausson is largely responsible. It’s quite hard to explain why her repeated, echoey cry of ”it was only because I felt so alone” makes ‘Give It Back’s final minute so compelling, but it’s something to do with the way her crackly delivery conveys nerves rather than angst, somehow rendering a superficially heartfelt sentiment confusing and edgy. ‘Sea Sick’ is so charged it manages to make having a terrible time on a cruise liner sound impossibly exciting “am I the only one with an original hip?” yelps the singer in alarm; “I had more teriyaki than I could bear” she fizzes as a hail of free noise engulfs her. ‘Wishing Well’ dive bombs straight into your nervous system with a perfect, vintage keyboard swirl that comes entwined around the hysterically delivered hook-line “I threw my money in the wish well, nothing got better only slightly wetter”. ‘Rumours’ is a quite delightful stab at getting inside the head of a crazy bag lady: “I only shower every second Friday” sighs the singer. ‘Big Bangs, Black Holes, Meteorites” offers up two minutes of pogo-along thrash about how the entire concept of space is just awful. All through this Olausson gives every impression of earnestness; it’s this ability to fashion a hook out of something nobody in their right mind would even think of that ensures a level of sparkle even when the sonic territory is well trodden.

Wait a couple more years and Love Is All will, in all likelihood, make roughly the same album again. This is fine. As the only band on the planet with a license to make sax-driven twee, it’d be a waste if they did otherwise.