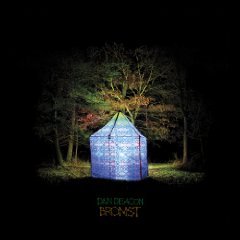 Dan Deacon's second official UK album Bromst is a mischievous, soulful collection of spirituals and spasms, on which the Baltimore»

the vinyl is limited to 300 copies on yellow vinyl. the fact is dan deacon is special. and now, three years since the creation of uk debut lp 'spiderman of the rings', comes the new album 'bromst'. recorded and mixed by brett allen in north western montana studio snowghost, and clocking in at 70 minutes it fuses together the intensity of his live shows with his background in electro-acoustic composition. the outcome is a collection of pieces that are intense and epic, but down to earth and welcoming. bromst embodies the same energy and excitement as spiderman of the rings, but the craftsmanship and composition has a wider scope and richer palette. and anyone who's ever found themselves gathered around the mad scientist-like, daffy duck t-shirt wearing dude behind an array of multicoloured gaffa-taped equipment and mid tag-team dance contests, beckoning at strangers and taking part in frenzied sing-alongs will know the dan deacon experience. his art is about community and how to organise and inspire it. founding now well-known art collective wham city, organising and running annually sold-out diy music festival whartscape, and conceiving, planning and curating massive 60 person / 30 band tour baltimore round robin, it's clear that bringing people together is the major theme in his work. so here it is then, a more emotionally-charged, intricate and complex album, skilfully executed and woven together into a rich, dense, noisy dance pop that's become dan deacon's signature sound. we'd expect nothing less.....release date: 30/03/2009
Description from RoughTrade.com