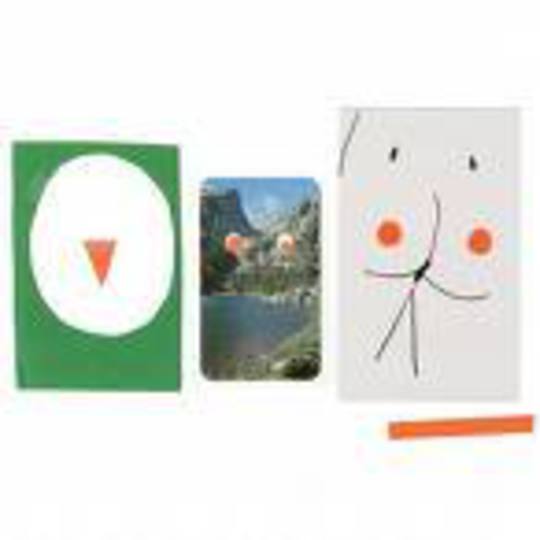 With Terrific Seasons (2007) and the ‘Taro Tarot’ EP (2008), These Are Powers proved themselves capable of matching Liars’ They Were Wrong... or Sonic Youth’s EVOL, without becoming the insipid disco-punk copyists that Liars spawned at the beginning of the decade, and reputedly sacked their rhythm section for fear of being pigeonholed with. Seeing as how Pat Noecker was part of that rhythm section, there’s a school of thought that would call All aboard Future TAP’s own Drum’s not Dead, so daring is the decision to dispense with the heaviosity, dread, and (in a word) ROCK of previous releases. This part of the story’s only worth telling, though, to bring in the hordes of Liars-fans, because there’s a lot more to it…

We’re wrong-footed from the word Go: ‘Easy Answers’ sounds like Prince talking dirty to an office photocopier set to print and staple 300 copies of his purple-thonged derriere. Anna Barie’s doing the lascivious gasping, however, and a vaguely Anticon-style rap that’s as tongue-twisting as it’s brain-twisting, but it’s less about titillation than titivation: setting off fireworks in your brain, not your groin. Okay, ‘Life of Birds’ (Track 2) does sound filthy: “put your money on the shower floor / hit me with your neon lightning rod…” and there’s more of the same on ‘Double Double Yolk’ (Track 3)with its orgasmic hollering to rival Lizzie Gang Gang Dance’s onstage possessions, but laid over wobbling bass, and an arpeggio of computer game sounds, like the ascending/descending platforms a pixelated character has to hop on, to get through the jungle (whilst dodging those poison darts the lyrics mention).

Gradually, a narrative takes shape. The album’s opening line is “we came back / we came back / and brought it with us”, just as the previous EP “went a-home for Easter… and I got back… my name”. Enacting their own push through gobbledegook to literal meaning, TAP have few words for the shamanic enstasy of their music – the “deep dive” into the unconscious, race-memory, or reptilian hind-brain – but it wouldn’t be worth the final revelation unless they dragged you through the marshes, first. The key-line, then, is: “creatures crawl up from the deep / and escort you to your origins” (‘Parallel Shores’). All aboard Future could be called TAP’s post-apocalyptic record – in the least erotorhythmic tracks, there’s a suggestion of flora and fauna re-emerging after the nuclear holocaust of those earlier albums, or perhaps the sexuality of Spring, after a bleak & tempestuous Winter. Paradoxically, the apparent discontinuity with the previous releases could be the result of a shared formal aesthetic derived from the visual arts; it just happens TAP are now painting in dashes of colour, rather than great slabs of black.

So anyhow, if you thought you had a handle on TAP, All aboard Future throws out almost all of the signifiers that would suggest Liars, and reaches back to the late-1970s / early-1980s futurists (This Heat, Cabaret Voltaire, Throbbing Gristle) as much as any contemporaries (Black Dice, Gang Gang Dance, Animal Collective). Thing is, when people cite the former trinity, they basically mean ‘Discipline’ and ‘24 Track Loop’, but rarely the un-danceable soundscapes between. Frances Morgan’s right to say 23 Skidoo, but most readers take that to mean the one that became ‘Block Rockin’ Beats’. Yes, the closing track ‘Blue Healer’ (Track 9) starts with a sample-collage like the Cabs’ ‘Voice of America’, but it’s punctuated by Anna’s jubilant yelps. After a minute’s silence, the “secret-track” is a field-recording from a city-street or road-side, but the voices are laughing, and the last intelligible phrase of the album is “enjoy your bike-ride…” Okay, that’s not the most radical statement we’ve ever heard, but do we actually need more bands telling us to storm the barricades? ENJOY.