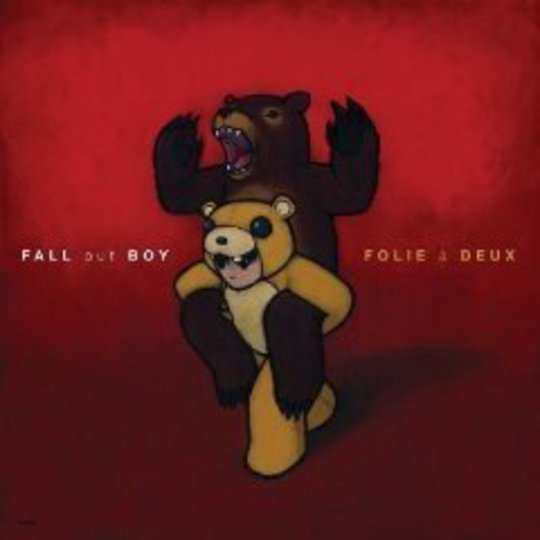 I met Fall Out Boy once. Well, I met Pete Wentz, photogenic bassist and lyricist of the ‘Boy. They were playing at Cardiff University’s Great Hall; I was working on the Union’s reception for an afternoon-into-evening stretch. I remember it because a friend of mine – a few years younger than me and something of a mega-fan – was up to see them, and fairly over the moon about it too. Wentz was wandering around the lobby looking slightly disoriented, and together we tried in vain to get his laptop tuned into the university’s wireless internet network. He was lovely though – genuinely down-to-earth and helpful, happy to assist when I seized the opportunity to exploit this fleeting encounter and get a ton of stuff signed by the band for said friend, currently one of a thousand-strong queue forming outside the venue. My friend was thrilled with his lot and blown away by the show, and I was pleasantly surprised by the amiable nature of one of American pop-punk’s primary poster boys.

If all the above seems wholly incidental – well, it is, to a degree, though there’s semblance of a point buried in there. Namely, the unabashed, often ill-advised and entirely admirable nature of early music fandom. Take me, for instance. I spent my early childhood slowly assembling the entire discographies of Michael Jackson and Bon Jovi on cassette, for some reason a copy of Moods 2 impacted on my pre-pubescent self with considerable force, and I consistently devoured the Now That’s What I Call Music… series. Teenage years ensued and the development of a music taste proper: as Britpop hit its peak, Oasis and Blur ruled my roost, along with countless other (many frankly godawful) acts I’d much rather forget (a stack of singles in my room prevents me from doing so). What I don’t want to forget, however, is the simple, unadulterated love I held for these bands – still hold for some; not unlike, I suppose, how some girls fall for boy bands or some kids’ obsessions with cars/trainers/dinosaurs (ahem), for instance, never really fades. It's the best kind of fandom: one impossible to explain – something that, for some intangible reason, fascinates and consumes in equal measure.

My friend’s delight at his signed goods – and indeed, the youthful buzz of enthusiasm palpable as I negotiated my way down the queue snaking out of Cardiff SU’s doors – got me contemplating this kind of fervent appreciation. Because, as easy as it is to deride the musical tastes of those exhibiting fanatical inclination towards an amalgamation of pop and punk so heavily sidling towards the mainstream – towards arenas, and the kind of mansions and pool parties so short-sightedly lampooned by Good Charlotte’s ‘Lifestyles Of The Rich & Famous’ – it’s just as easy to forget the enthusiasm and honest passion these fans hold for their idols. Take Girls Aloud as an arbitrary example. Sure, they might not be as “real” as whatever is currently occupying the Number One spot at Rough Trade East, but that doesn’t invalidate the love their fans hold for them any – doesn’t make it any less genuine. Have you ever seen the fans at a Girls Aloud show?

Anyway though: Folie à Deux. Fall Out Boy’s fifth album literally translates “a madness shared by two,” and over its 50 minutes running time it certainly displays schizophrenic qualities. At heart, however, it remains an overly polished, bloated affair, its most interesting constituent parts clouded by a tendency that has always blighted this band: to over-produce and compress their material to within an inch of its life. To say that the relentless polish and sheen that stays the course of these 13 tracks becomes tiresome is to put it mildly.

Some vestige of quality emerges nonetheless. A professed love for the sadly departed The Get Up Kids clearly informs the album’s poppiest, but traces of them can also be found in the melancholy permeating the likes of ‘The (Shipped) Gold Standard’. "I want to scream 'I love you' from the top of my lungs / But I’m afraid that someone else will hear me" pouts Patrick Stump, drifting just the right side of conviction, the number consequently one of the record’s more endearing. Guests are rife here too, sometimes hard to discern – though when Elvis Costello (Elvis Costello!) appears to prop up the string-soaked melodrama of ‘What A Catch, Donnie’ (just before it flings itself to corners anew by way of an irony-free key change and further guest contributions namechecking past FOB hits) the effect is bizarre as it is oddly gratifying. Likewise, the lyrical subversion of Nirvana’s ‘Drain You’ (“I don’t care what you think / As long as it’s about me”) is another odd move in an album that reveals further idiosyncrasies and curveballs the more you listen to it. ‘Headfirst Slide Into Cooperstown On A Bad Bet’ for example: a multi-threaded, harmonies-laden beast of a pop song, bursts of ska guitar, synth and brass permeating. Despite being absolutely – derogatorily – stuffed to the gills, it does make a weird kind of sense, if you let it.

Of course, roping in the disparate likes of the aforementioned, Lil Wayne and Debbie Harry (!) alongside peers of the “scene” (members of Panic At The Disco, Gym Class Heroes and The Academy Is… among others) is something only a band of the platinum-unit shifting stature could feasibly pull off, and it doesn’t always work out. The touted R’n’B influence (Pharrell’s here too, producing and seeing out ‘w.a.m.s’ a capella-style) is never quite as strong as some quarters suggest – FOB are inarguably at their strongest when bashing out the kind of sweet hooks that ‘(Coffee’s For Closers)’ and ’20 Dollar Nosebleed’ revel in – never mind the swooping strings and brass that reinforce these rushes of melodic sensibility.

Ultimately though, this is an album that finds the band at an interesting crossroads. Adventurous in parts, however occasionally sterile and exhausting these orchestrated blasts of pop-punk energy may be, there remains a sense that in both embracing the mainstream leanings they’ve oft-exhibited (made great strides towards via 2007’s Infinity On High, even) and broadening their palette some, Fall Out Boy are accomplishing exactly what they set out to achieve.

Whether or not this is enough to inspire acolytes the likes of which this writer had a first-hand audience with some three years ago remains to be seen, though Folie à Deux does look certain to satisfy fans' appetites as much as it may surprise and intrigue certain others.