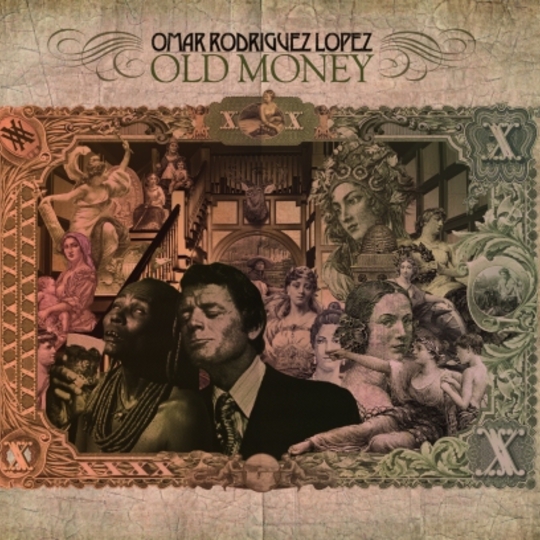 First up, if you think all music must come with a melody or hook, this really isn't going to be a wise purchase. Old Money might be some of the more accessible material of Omar Rodriguez-Lopez' work, but that said, that doesn't mean it's particularly accessible. With ludicrous sound manipulation and fretboard fleetness throughout, it's much closer to The Mars Volta than At The Drive-In or De Facto. In fact, this album was reportedly a possible follow-up to TMV's Amputechture (reviewed) until Rodriguez Lopez did an about turn with musical direction.

A disorientating and nauseating amount of sound is contained within; at times it can be a complete chore for anything to really register. Sweet and simple this ain't. Opener 'The Power Of Myth' is all you'd expect from Rodriguez-Lopez, knowing how close this project was to becoming a Mars Volta release. It just doesn't quite hold the same resonance as TMV – there's no Bixler-Zavala processed wails – but it is the dynamic tone setter for what follows, much psych, much funk and much noise, and mostly all at the same time.

The less chaotic moments truly stand out; 'How To Bill The Bildeberg Group' is a haunting three-and-a-half minutes of processed voices, reverberating skin-hits and unsettling murmuring bass. Certain passages can be a somewhat challenging listen, 'Trilateral Commission As Dinner Guests' is simply the sound of several people fucking around with musical instruments for the sake of it, whichever way you look at it. The hard work is, however, ultimately rewarded with the nine-minute finale, title track featuring the longest and greatest chunk of jam-packed jamming since you last saw 'Drunkship Of Lanterns' live.

It's a record which many may be tempted to describe as a bit – or a lot – of prog-wankery, and that's precisely what it is. However, that is what it is intended to be, and expectations must be absolutely levelled with this. There's a lot here – a lot to like and dislike – a whole bag of influence from the straight up obvious, but also from more obscure – Erkin Koray, The Chuchills. It's just as easy to loathe this record as it is to love it, but enough moments of merit exist to stifle any doubts over the quality of Rodriguez-Lopez' output as a solo artist.