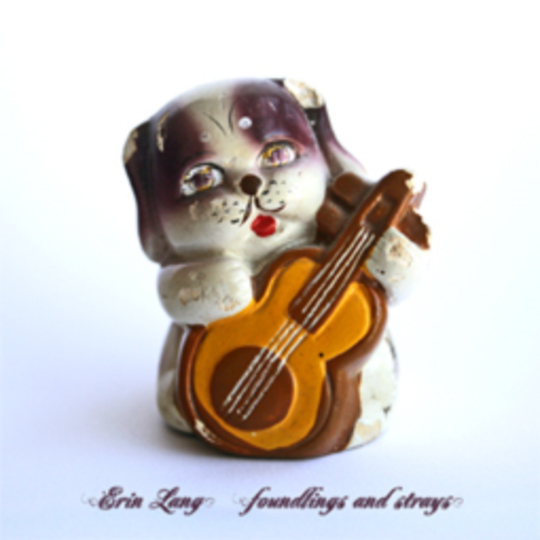 Montreal-born Erin Lang has led a pretty charmed life. Brought up by her puppeteer mother and her Canadian rock-star father, she shunned various offers of university scholarships in favour of flitting around Toronto's 90s music scene, playing keyboards for local cool kids Tuuli. Following a chance meeting with The Cure's Roger O'Donnell in 2000 she decided to concentrate on her solo career, collaborating with O'Donnell on a string of EPs – the latest being Foundlings And Strays, a spawning of her current Munich-based sessions working towards her debut album proper.

Refreshingly (given Lang's upbringing in the spheres of success and talent), she manages to break the trend of the all-too-common famous parents/cringeworthy children syndrome, proving to be a talent all unto herself. Although Foundlings And Strays only features three truly new songs - the remainder being remixes - the EP more than demonstrates Lang's remarkable talent. The calypso flavoured rhythms of opener 'A Thousand Years' bob gently below Lang's breezy chants, adding an exotic edge to the song's Feist-esque chilled groove. 'You're Better Off' continues in this vain, with Lang’s repeated whispered assertion that "You’re better off alone" perfectly complimenting melancholy pianos and fragile ukulele strums, all of which are subtly strengthened by O’Donnell's minimally crisp production.

Comparisons with Felt Mountain-era Goldfrapp are unavoidable given their similar exploration of dreamlike, pop-folk territory; however whereas Goldfrapp's output tended to veer towards all out pop-bombast, Lang it seems is almost wary of committing herself to an instantly memorable hook or sing-along chorus. For the majority of the EP this trait of restraint is a clear asset, allowing Lang to focus her energies solely on creating an incredibly rare and personal emotional intensity. At times, though, one can’t help thinking Foundlings And Strays would be a far more satisfying entity if Lang simply let herself go occasionally, especially when considering that as it stands the record has no identifiable climax, an oversight further emphasised by the very similar tempos used throughout.

The selection of remixes stray slightly away from the folksy charms of the first few tracks, trading gentle guitar strums and pianos for the allure of crackling analogue synths and minimal electronic throbs. Yet by the time the Dntel remix of 'You’re Better Off' has faded away into the grate of a CD player switching itself off, it’s actually quite relieving to know the EP's 25 minutes are up. Because, despite every song on this release being an enchanting pop gem of delicate instrumentation and emotional vulnerability, the pure harmonious sweetness of Lang’s songwriting and, indeed, voice gradually become rather ingratiating; leaving one feeling that like the best sweets, she’s probably best appreciated in small doses. Still, if she manages to lay slightly off the twee, her forthcoming You Are Found LP promises to be very special indeed.