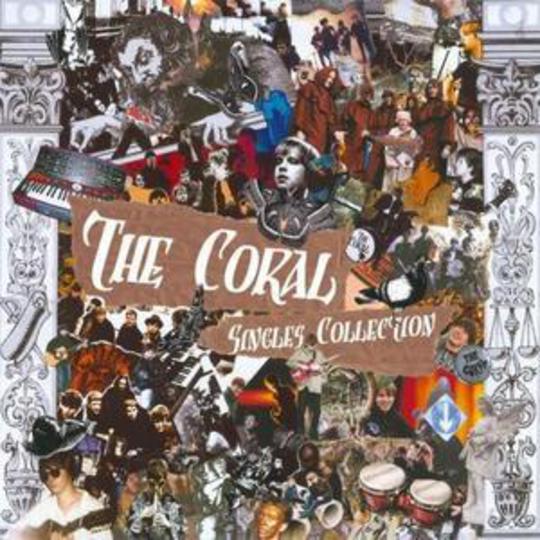 According to singer James Skelly, The Coral's singles collection marks a full stop in the history of the band. Now's a good a time as any, then, for a critical assessment of their canon and in particular how they've progressed (or... not) since their Mercury nominated, widely fêted debut of 2002.

That The Coral remains their most complete record to date is a widely held opinion, one with which this writer would certainly concur, but they've always been regarded as more of a singles band over the course of their six year career. But though memory suggests the quality of those singles has been pretty consistent, hearing them in this non-chronological order makes one thing abundantly clear: they're still yet to better the early trio of 'Dreaming Of You', 'Goodbye' and 'Shadows Fall', and much of the later stuff pales in comparison.

It might sound like classic indie snobbery, but, to these ears, it's true: in general here, the older stuff = better. Simple as. The Coral are absolutely great at what they do, which is, essentially, writing intricate pop songs inspired by the sounds of the 60s and 70s, but their promise to get weirder and weirder after some of that first record's more excessive moments (Zappa-esque freakout number 'Skeleton Key', for instance - sadly omitted from this collection*) was one they never quite made good on.

Indeed, it's material drawn from the second and third albums, Magic And Medicine and The Invisible Invasion where this lack of progression is most apparent. The former's 'Liezah' (never actually released as a single, according to every discography we've seen...), 'Don't Think You're The First' and the latter's much-maligned 'In The Morning' are but three examples of The Coral treading water - hardly bad songs, but pit them against the tracks mentioned in the previous paragraph and, well, it all sounds a bit by numbers.

That's an accusation levelled at latest full-length Roots And Echoes, but I'm in the minority camp that thinks that record represents something of a return to form: here, they've abandoned any pretence and gone straight for the pure pop jugular. 'Jacqueline' might well be a guilty pleasure, but there are few songs in their oeuvre that sound sweeter.

New track 'Being Somebody Else' also ploughs this acoustic-driven furrow, with Skelly's lilting vocal performance and the inclusion of some strings the only real deviation from The Coral norm. Three more newies, along with a selection of outtakes and live tracks, can be found on the second disc, but there's little to inspire there either, leaving this collection as an essential purchase only for completists or those entirely unfamiliar with one of the noughties' most enduring bridesmaid bands.

* it wasn't a regular single, but like 'Shadows Fall' (which is included here) it was the lead track from the EP of the same name. Go figure.