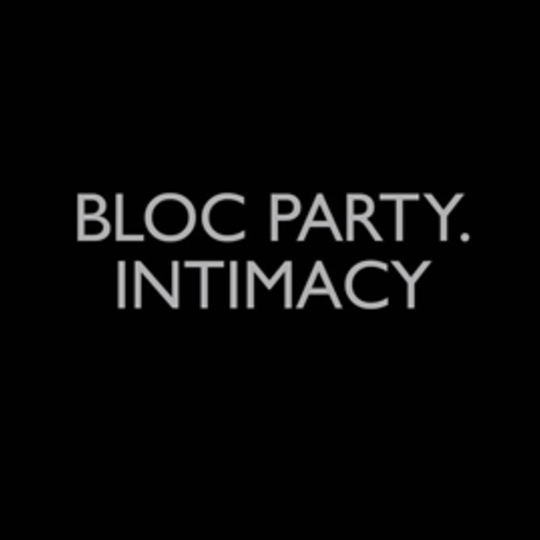 Pumping out a new album barely 18 months since the, to these ears at least, slight wrong-turn of A Weekend In The City (DiS’s Mike Diver awarded the album a perhaps overly enthusiastic 9/10), suggests one of two things about Bloc Party’s third LP, Intimacy: either it’s warmed-up leftovers, a la Radiohead’s Amnesiac (I don’t care what the fanboys say, just listen to the two versions of ‘Morning Bell’ and tell me the latter isn’t a hideous mistake that should have been left unheard), or the London band is trying to atone for relative errors that have damaged their egos, if not quite their fanbase.

I’ll mention Radiohead again, as Kele Okereke and company have sprung this album on us with a lack of preparation time that makes the epochal release strategy of In Rainbows look like Chinese Democracy’s marketing campaign. Two days’ notice, and bam. Come October there’ll be a full, physical release, with more tracks and full artwork, but for now the ten tracks available for download via Bloc Party’s official website will suffice.

So let’s take the second scenario regarding Intimacy’s accelerated gestation. A Weekend In The City attempted to experiment by drafting a couple of minutes of cut-up microhouse, radionoise, or dubstep onto otherwise standard Bloc Party songs, and then attempted to mature by throwing all the ballads at the second half of the record and stripping them of the thrilling juxtapositional rhythmic surge that made ‘So Here We Are’ and ‘This Modern Love’ sound like the best things ever at the start of 2005, in the process making them sound closer to Coldplay than anything from debut album Silent Alarm. Intimacy has to repair both those errors.

And it starts promisingly. ‘Ares’ mashes up ‘Setting Sun’ by The Chemical Brothers with guitars that sound like Public Enemy’s most startling sirens, and a melodic framework ripped-off from a schoolyard “Thumb-War” _chant. The cyclonal drum pattern that dominates the song is going on 40 years old now, but there’s always scope for going back to The Beatles if what’s dredged up still sounds radical, alive, _alarming.

‘Mercury’ may have a nonsensical chorus and some kind of freaky anti-melody, but the arrangement, though messy, points at an attempt to do something far beyond the likes of, say, Editors’ comprehension. It reminds me of parts of Kid A (there’s that band again), though it doesn’t sound much like that record; there’s an ambition and intent there, a desire to bring something original and strange to a wider audience that is admirable even if slightly wrongheaded in execution. There are more ways to be experimental as an ‘indie band’ than merely busting out the computer and the crazy rhythms.

Lyrically there are missteps, and the most vocal critics of Weekend… will be presented with opportunities to pick holes once more: the farcical line about taking a watch off before making love that opens ‘Trojan Horse’ is enough to make anyone squirm, and the cod-scientific / profound song titles belie the otherwise pretty base lyrical topics on offer, namely getting wasted, falling in love, and having sex. But, more positively, Okereke is writing at a level that qualifies as ‘universal’ throughout Intimacy – there’s no reference, oblique or otherwise, to eating foie gras, one of a smattering of seemingly widely acknowledged lyrical faux pas on the band’s previous album.

‘Halo’ successfully rocks like ‘Banquet’ and ‘Helicopter’ used to – there is much here to please Silent Alarm purists – and ‘Signs’ and ‘Biko’ achieve the album’s titular mood through genuine sonic delicacy, even if the band can’t resist cranking out the Aphex Twin-inspired beats for the latter’s second half. ‘Zepherus’ does something genuinely beautiful with choirs, synths and beats (it’s as if Baz Luhrmann requested a re-write of _Weekend…’s ‘Song For Clay’ – Ed), and though the lyrics aren’t above criticism, the juxtapositions of slashing guitars and scrambling electronics on ‘Trojan Horse’_ work much better than anything on Weekend... managed.

Also, thankfully, Okereke seems to have shied away from any desire or prompting to centre-stage his vocals through close-mic’ing and über-compressing them until they swallow the whole mix. When Bloc Party toured their last album it became quickly apparent that their frontman wasn’t up to the vocal push in a live environment. But I don’t think I’m going out on a limb when I say that people don’t listen to a Bloc Party record for the vocals in the way they might listen to, say, Leona Lewis.

Perhaps penultimate track ‘Better Than Heaven’ encapsulates what Bloc Party have been attempting to do for their last two records, namely aligning all their different directional desires: to swoon, to rock, and to experiment all at once. Intimacy gets pretty close to achieving that ultimate goal, and while there’s nothing (yet) as potent as ‘So Here We Are’ or ‘Positive Tension’ seemed at the beginning of this band’s career, there’s also nothing as miscalculated as Weekend…’s anti-climax closer, ‘SRXT’’.

Intimacy is not quite the radical statement its makers might think it is (I’m not sure what could be given the group’s evident ambitions), but it’s definitely a little bit of invigorating redemption at a time when doubts were beginning to cloud what was, initially, a flawless reputation.