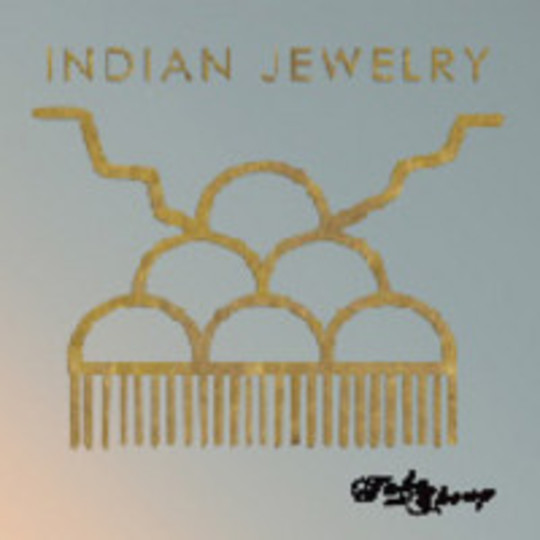 The music of Indian Jewelry stands like the black obelisk in Kubrick’s 2001: A Space Odyssey – dark, foreboding, mysterious. On Fake And Cheap – an album comprising songs recorded between 2006 and 2007 – the Texan trio throw down dense slabs of sound, flayed synth, hacking percussion and unhinged mutterings. It’s shoegaze dressed in the clanking robes of industrial gothic, mutilated and left for dead by the side of the road. To quote some old hippie, it’s a heavy scene man.

Where the drone Olympics of shoegaze titans such as My Bloody Valentine suggests something almost immortal, here the sound is earthy, weighed down by thinking that is brute and nasty. Of course, this blood raw, sonic butchery is utterly absorbing. From the very first note it’s clear that something sinister this way comes. ‘Halfass Engineer’ pounds its dread way down a dirt track, sloping ever closer, threat implicit in every maltreated guitar line and flagellating beat. The similarly off-kilter vocals ensure that every lyric, no matter how innocuous, sounds like the babble of a delirious mystic, tongue swollen in unholy prayer.

At times it can all be a little cloying, with ‘menace’ a default mode from which Indian Jewelry are loathe to stray. For the duration there is almost no respite from the cold, clammy atmospherics. Ultimately, you just surrender and are suffocated. On ‘Shotweapon’ the guitars sound glitteringly cruel, peck-pecking unceasingly, like the eagles that torment Prometheus. Then the machine-tooled psychedelia of ‘Eighteen Cranes’, a tapestry woven from the most unusual assortment of sound – bleary-eyed croon, a snatch of spoken police despatch and guitars that scrape by like a train coming off the tracks, spewing a cargo of Eastern-tinged exotica.

The drone-heavy ‘West Alabama’ buzzes like the biggest, filthiest bluebottle you ever did see; a pandemic-carrying, world-killing dirty bastard. Elsewhere, ‘We Did It All’ bounces off the edge of disintegration on lassoing, Joy Division-style bass, the lyric repeated ad infinitum, like some bizarre invocation. Not as bizarre as ‘Get Thee To A Nunnery’ though, the narcotised, shamanistic hum sounding like the prelude to a rite of human sacrifice, the primal evil of the vocal finding its counter in coolly precise, modern beats.

To the last, Indian Jewelry continue to sound a confounding note, the glitch maelstrom of ‘Crushed Beneath Money Eye’ all hacksaw electronics and piercing beats suddenly giving way to the album’s most, in fact only, comforting moment. The final ‘Smoking Fake Opium (All Night Long)’ sees them anoint us with something soothing after the preceding firestorm of abrasion and disturbed noise, the song casting the listener out to sea on a wave of gently unfurling synth.