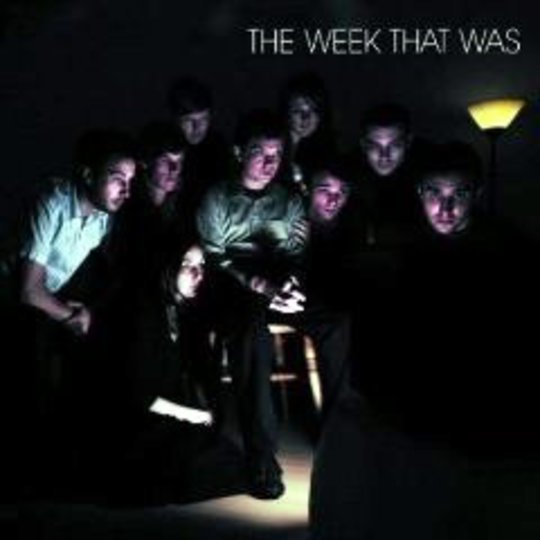 A high-concept album inspired in part by the intricate storytelling of novelist Paul Auster, The Week That Was unfurls the strands of a crime thriller whilst commenting upon the complexities of our relationship with the media. It’s a curious but absolutely contemporary conceit for an album and one that is deftly implemented. Fostered by the fertile imagination of Field Music’s Peter Brewis, The Week That Was’s self-titled is an utterly singular piece of work, 32 minutes of pop noir that prickles with intelligence and intrigue.

At every turn we wonder where exactly this record is taking us, the eight tracks each presenting a different perspective, some complementary, some contradictory, a babble of voices ready to confuse and confound us. The album was written in one week, in late 2007. In part, Brewis’ thinking was fired by his having just thrown his TV out. This period of self-imposed televisual exile got him thinking: what would be the effect on society if we weren’t led to suckle at the teat of the media. No TV, no radio, no internet; the stream of information and misinformation stoppered. Would the malnourished masses cry and bawl, or would we learn to think for ourselves?

These issues are raised in parallel with an unravelling crime narrative, a story that seems to revolve around a kidnap; the cast of victims, villains and spectators the conduit for Brewis’ ceaseless questioning. In the convergence of themes, The Week That Was has definite correlations with the Madeleine McCann case and, given the timeframe within which the album was written and recorded, it seems obvious that the story had a definite influence on Brewis’ thinking. What makes The Week That Was so special, however, is not simply that it is dealing with difficult and thought-provoking themes, but that it twins such subject matter with beautifully skewed pop, evoking Bowie, Kate Bush and Genesis at their most adventurous.

‘Learn To Learn’ strikes an early portentous note, big echoing drums like someone taking a wrecking ball to Spector’s Wall Of Sound, synth and guitar stabbing in before Brewis mutters the unsettling line “The position you are in is inescapable”. It’s cloying and claustrophobic. Sticking a pencil in the TV eye, ‘The Good Life’ suggests that the images that barrage us day and night from the vast battalion of television channels should not be so readily believed.

A beacon of almost untainted optimism amidst the fearful murk, ‘The Airport Line’ documents a train journey between Sunderland and Newcastle, swooning piano, elegant strings and Brewis’ delicate vocal meshing together with dazzling clarity. From here we are transported to the prog-pop terrain of seven minute epic ‘Yesterday’s Paper’. After an almost timid beginning, the sedate strings begin to sting, the piano to pound and the piston-like percussion to beat a fearsome tattoo.

‘Come Home’ strikes a note of profoundest melancholy, lovely languid piano carrying the simple plea, an ode to loneliness and to the one that’s gone. Then ‘Scratch The Surface’ drives us to a distinctly disconcerting close: is Brewis projecting himself into the role of kidnapper, with the lines “Don’t you read the paper / You’re bound to find me later”? Regardless, the fierce drums, pointed guitar and cavalcade of “oohs-oohs” lend an added frisson to his sinister declarations.

The Week That Was is pop at its most outrageously ambitious. Executed with serious flair, it manages the rare feat of being both mentally stimulating and musically satisfying. It is, in every regard, one of the most daring albums you’ll hear this year.