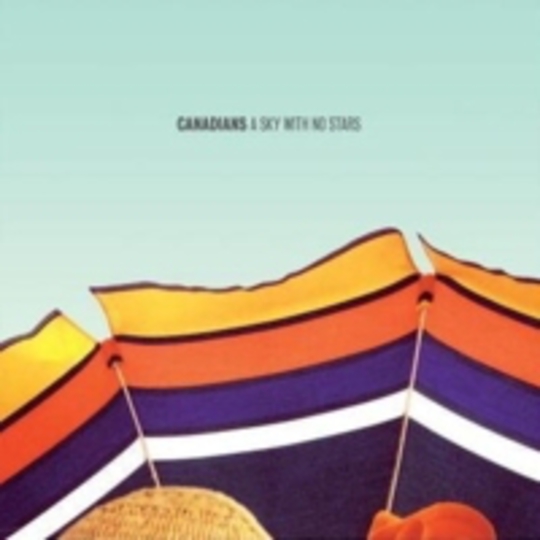 With vocals delivered in a thick, inescapable European accent and one foot rooted firmly in US college rock soil, Italy’s Canadians should on paper present some kind of hidden treasure, a combination of the goodtime feel of the Beach Boys, or maybe Fountains of Wayne without the odd bouts of nausea, and the four-chord garage rock of Weezer coupled with the soft, smiling-eyed vocals of Mew or long-forgotten, hot-for-five-minutes-in-1999 Swiss-types Chewy – you know the type, the kind of honey-lined, twee male voice that could deliver bad news in a way that made you happy for some reason.

So there’s potential for this debut album from the Verona quintet to either load up its cart with a selection of instantly-memorable pop songs, ‘60s rock ‘n’ roll backing vocals and all, or provide a range of beautifully-emotional masterpieces delivered by cherubs sent from the very heavens themselves. But it's potential that goes sadly unfulfilled - A Sky With No Stars fails to commit either way and ends up frustratingly anonymous because of it, the songs using the same fuzzy, warmly-distorted guitar sound over matching tempos time and again until it becomes tough to distinguish one song from the next; not sub-par, just under-ambitious following on from the album’s highlights.

Well, the one highlight. The title track steals the show with a cushioning wall of noise which gradually works its way from silence to near-epic levels, the nurtured vocals coupling with the constantly-switching, robotic electronica effects sorely under-utilised for the rest of the album, which relies on the sort of sunny fuzz-pop too blunt to make any real impact instead of the strikingly-blissful reassurance of this opening three minutes.

There are gems hidden elsewhere; the charm of the unusual pronunciations, the point during the chorus of ‘Summer Teenage Girl’ where vocalist Duccio Simbeni finds his strongest note at the song’s headiest point and expels sheer cutesy joy, the ‘A.M.180’-aping Casio tones in the introduction of ‘Ode To The Season’ and amidst the mire of less memorable songs, ‘Last Revenge of the Nerds’, as sugary-sweet as any other point on A Sky With No Stars yet at the same time somehow harder-edged and slightly more persistent. But as everything rolls to a natural six-minute halt with ‘Good News’ and the promise that “the revolution is near”, it’s the album itself that could do with a little shaking up.

All the basics are in place here, nothing abhorrent to the ears, but so diluted are its peaks that this potentially good album has fallen into the trap of merely being alright and is eventually assigned one of the most disappointing of titles: an album you don’t even notice end.