Falling Off The Lavender Bridge 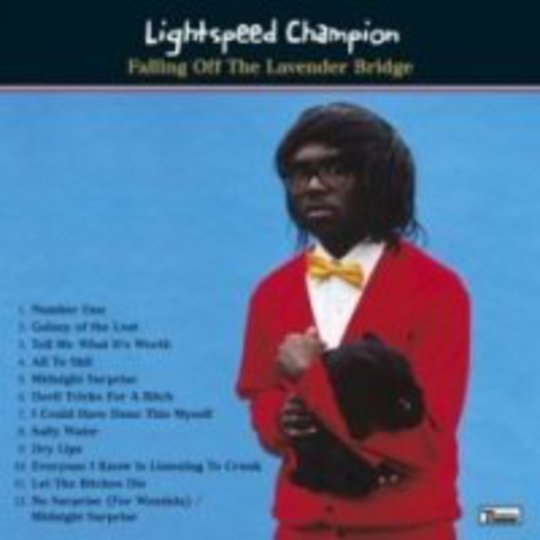 Devonte Hynes has covered some serious ground since he, Rory Atwell and Sam Mehran released_ For Screening Purposes Only as Test Icicles little over two years ago. One particular article which struck me at that time, and in retrospect has come to crystallize Test Icicles’ dual potency and impossibility as a musical unit (a duality embodied in Mehran’s scream: one which actually _sounded _like it was physically damaging its perpetrator but whose perpetrator screamed on nevertheless), was published in The Guardian in November, 2005. In the article, Dev astutely explained: _"We're not very good, we can be absolutely horrible live. And we've got a bad name. When I told my mum what we were called, she sort of laughed. And then realised it wasn't funny."

Shift two years forward, into a climate in which many of the mid-noughties British angular guitar-rock bands of the much-hailed British Renaissance have sunk into self-conscious self-aggrandizement (Bloc Party, anyone?), it’s clear that it was in fact Test Icicle’s absolute lack of inhibitions that made Dev’s last outfit so much fun. Even if it meant sounding ‘absolutely horrible’, on occasion, the kids weren’t caring as much what to say, what to wear, how to pose; instead busying themselves throwing a whole heap of noise in peoples’ faces. The Test Icicles sound, like Dev’s Hot Pink Squier Showmaster, was confident, brash and ultimately destined to implode. Test Icicles broke up a mere four months after the release of For Screening Purposes..._ in October 2005.

In part, it feels like Hynes has moved with the ranks of the mid-noughties renaissance with Falling Off The Lavender Bridge. Now working under the title Lightspeed Champion, Hynes is a transformed man. Where For Screening Purposes Only’s front cover was a technicolour, faceless and title-less collage, even the band name barely managing to form itself, Hynes’ debut solo cover is all borders, ordered tracklisting and manageable fonts framing an uncomfortable-looking, top-button-fastened Hynes purposefully clutching a rabbit in his arms. The music is similarly considered, with Saddle Creek producer Mike Mogis draping Hynes’ twelve compositions in all manner of ‘ambitious’ instrumentation, to a very much varying degree of success. The thing is, Mogis’ ‘Americana’ treatment of Lavender Bridge’s core material all too often saturates each song, soaking though to the core of Hynes’ material and threatening to set in to rot.

Take ‘Midnight Surprise’ for example, in which the Bright Eyes cohort nearly drowns Hynes’ extremely strong melody in violins, double-tracked guitars, pedal steel guitar, pizzicato strings, and overdriven electric guitar. Elsewhere, ‘Devil Tricks For A Bitch’ sees Hynes having to hang another engaging melody embarrasingly onto a plucked cello and tremolo guitar accompaniment, whilst on_ ‘All To Shit’ the accompanying instrument of choice is an oboe and clarinet. The overriding musical aesthetic of _Falling Off The Lavender Bridge feels at odds with Hynes’ London-intoned soft voice, and although this is interesting in part, playing off the sense of displacement and anxiety which permeates the record as a whole, it also feels self-conscious. The album, at times, almost sounds like the product of a commercially-driven strategy to package the talents of a developing songwriter within a tried-and-tested format. As I’m Wide Awake, It’s Morning was bound to be more commercially successful than the more artistically adventurous Digital Ash In A Digital Urn, so an Americana-ised Dev Hynes is more bankable than a more hedonistic, genre-mashing Dev Hynes. Falling Off The Lavender Bridge, a record produced, mixed and engineered by Mike Mogis, very nearly becomes a Mike Mogis record.

Thankfully, Hynes is adept to some seriously strong songwriting and_ ‘Salty Water’ perhaps stands as the pinnacle of his achievements thus far. Accompanied by little more than a hauntingly reverberating piano, the track sees Hynes meditating on his impeding, much dreamt-about rise to success, finally unconvincingly concluding: “I’m messing, I’ll get used to the height and the taste of salty water”. Hynes’ ability to embody emotional vulnerability in such an implicit fashion is one of the record’s – and the songwriter’s – considerate strengths. Elsewhere, _‘Midnight Surprise’, despite its bloated intrumentation and length, is also an extremely well constructed and catchy pop song, and ‘Everybody I Know Is Listening To Crunk’, whilst sounding sonically too close to Cassadaga, possesses a wit that Oberst’s latest offering did not.

One thing is clear: as he so ardently professes, Dev Hynes is clearly in love with music. In 2005 we witnessed this in the body-contorting viscerality of Test Icicles, and in 2008 it has been seen in his developing attention to melody and lyricism under the title Lightspeed Champion. A new year will hopefully bring a newly invented, more fully-formed Dev Hynes.