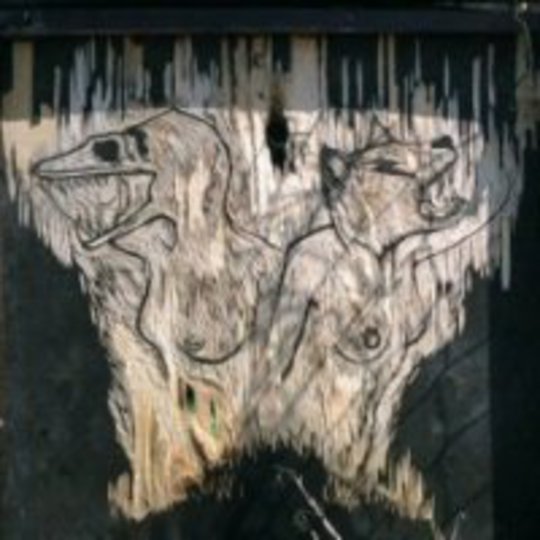 A blood-stained, anthropomorphised cat adorned the cover of Charlottefield’s debut album, How Long Are You Staying, and it was a combination of title and artwork that might have warned you off altogether. Yet, for all of Charlottefield’s feral ferocity, they still threaded an inviting pop sensibility between the post-rock shards, and if you were warned off that debut, by gum you missed out.

Never mind, though, because there’s plenty of time to catch up. For What Are Friends For (which, again, refuses to allow room for a question mark), Charlottefield have expanded their palette at all the edges: the cat has been replaced by a dinosaur and a wolf, each with a naked female body, and a more mature album takes shape that doesn’t so much aim for the throat as suck you slowly into a vortex.

Sure, opener ‘Beatings’ is angry and direct, shunning subtlety, but the majority of the songs beyond that are tense slow-burners, like Explosions in the Sky fed through a cheese grater. The tone is anxious and fretful: a newborn animal trapped on a motorway, darting from the headlights. The reassuring pop of ‘Late Repeat’ and chiming delicacy of ‘Broken Bell’ temper the friction created by ‘Wrong On Purpose’ and ‘Backwards’, creating an album of captivating duality - there is the sense that Charlottefield could make a beautiful, shimmering instrumental album, or a howling, paranoid post-punk masterpiece, but by combining the two they come up with something immeasurably better than either.

What Are Friends For is a restless, urgent collection of songs that will keep you permanently on your toes. It doesn’t overdo the twists and turns. It hasn’t been polished to death in the studio. And it isn’t just packed with isolating, un-likeable animalism - the human element is also pervasive, and charming. Four blokes made this album in a church hall in Norwich, and they’ve poured oceans of love and talent into the coffers. The result is thrilling.