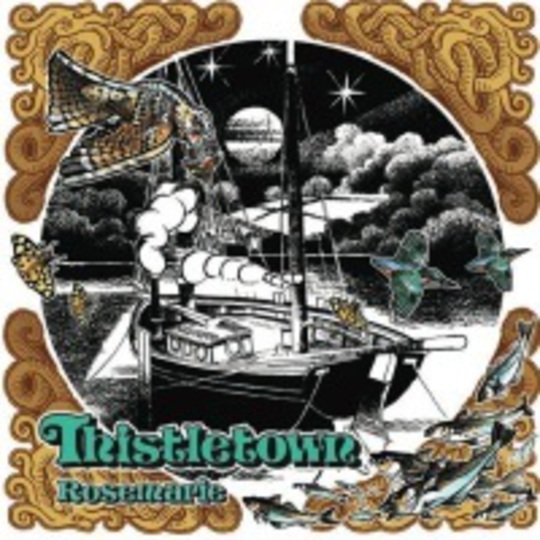 I take my job as a part-timing reviewer quite seriously. On receipt of this debut by Cornwall’s pre-Raphaelite folk fantasists (according to press release), I took myself off to Sherwood Forest for a proper listen. I first saw* Thistletown *on a Dutch barge on the Thames some months ago and was taken with their medieval flute and trumpet-driven grooves.

This five-piece live aboard a boat, grow their own vegetables, and make some of the folkiest, hippiest music your ears ever did hear. The band formed in 2007 after singers Tiffany and Lydia bonded over a shared love of nature and ‘70s maxi dresses. With their love of folk–rock acts like Pentangle, Heron, and Trees, you should, by now, have an idea of what Thistletown are all about.

But wait, it’s not at all bad. Multi-instrumentalist Jarvis, who plays accordion, trumpet glockenspiel and drums, delivers some deep New York soul that DJ Shadow would lose a limb to sample. The positively funky ‘Rosemarie’ and ‘Dance with the Sea’ along with the horn licks littered on ‘Glowworm’ expose a side of the Thistles that they could (and, indeed, should) further embrace.

Though the duel vocals are pretty, they can suffer from lyrical depth. On ‘Under the Trees’_ the singers proclaim:_ “We will dance under the tree, where I shall give my love to thee”_. The line comes off sounding distinctly like medieval pixie-love, which has no place in any serious music lover’s catalogue.

Rejecting and reforming art is a tricky business; it mightn’t make you particularly popular amongst peers but, done right, can be revolutionary. But do Thistletown want revolution? Perhaps, by rejecting the trappings of the modern age (or just the music of the age), they simply prefer to look far back to an England that once was.

This quixotic notion that drives the album, though musically adventurous, will isolate much of the album-buying public. But then, it’s not a popularity contest, is it?