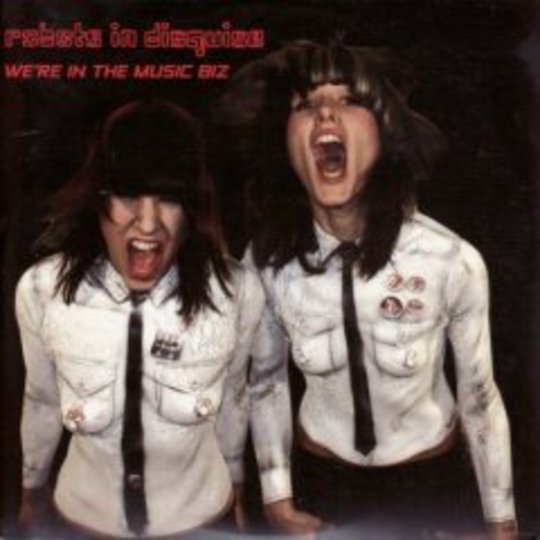 As far as having a good night out goes, Dee Plume and Sue Denim - a.k.a. Robots In Disguise - could probably write a party goer's tourist information guide full of real-life exploits both past and present. It may even end up a best-seller, or at worst be serialised by one of the tabloids. Mates of Noel Fielding and part of the Hoxton haircut brigade, these two could probably rake even more money in by unveiling kiss-and tell exposes on numerous celebrities’ after-hours exploits.

Unfortunately, they choose to make ‘music’ instead. Forget your poisonous vitriol that seems to be pointed in the direction of Adele, Razorlight et al for a moment and consider instead a more worthwhile target: the individual who deemed these two good enough for a record deal over countless other better bands and musicians currently flogging their wares in toilet venues up and down the country.

Yes folks, this is music from the school of Who You Know, rather than what you know or how good you are. For all the protestations raised by the music industry that Britain's got talent and here's BRIT School alumni to prove it, they go and sell themselves short by signing any old friends of those who should know better.

Even the titles of the songs say more about this record and its makers than any divine inspiration which may be gained by listening to the damn thing (and believe me, I've tried). 'We're In The Music Biz' (yes, we know, and we can't believe or understand it either), 'Can't Stop Getting Wasted' (big deal), 'Everybody's Going Crazy' (they've been subjected to this record too, then) and 'Don't Copy Me' (don't worry ladies, there's little to no chance of that).

Dreadful in every sense of the word, then. Shampoo were doing this kind of thing so much better a decade and a half ago, and at least they had the foresight to inject more than a little irony and humour into their rants. Avoid at all costs.