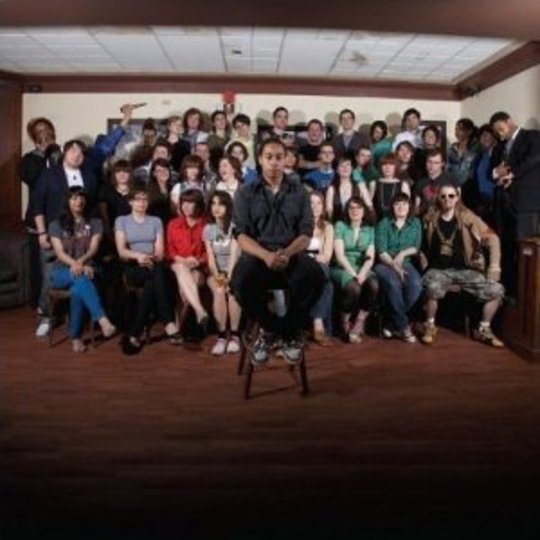 Let’s just take a second to be honest here – it isn’t often that Canada produces anything worthwhile.

Don’t get me wrong, I absolutely love the place; the people are some of the friendliest in the world, the country is beautifully picturesque and pure, and if you go to Montreal in the winter you’ll be fortunate enough to try poutine, a culinary sensation which will warm you straight to your bones, while completely altering the way you ever thought about chips, gravy and curdled cheese.

But in all fairness, while Canada’s got Aids Wolf, Holy Fuck, Cryptopsy (and let’s not forget the Bachman Turner Overdrive), they’ve also got Nickelback. In spades. And not much hip-hop that’s worth mentioning (feel free to check out my review on Canadian rapper soso).

Well, forget everything you ever knew about Canadian music and say hello to Cadence Weapon, 21-year-old DJ, MC and producer, whose new record Afterparty Babies is just so, so, _so_ good. It’s raising the bar on modern rap music in a way that this reviewer thinks is completely unique.

In order to understand this record, you gotta get the underlying message and inspiration for the LP: Cadence Weapon (real name Rollie Pemberton) is a self-confessed “afterparty baby” – in essence, an accident. While most people would try their very hardest to avoid this truth, Cadence celebrates his conception, and uses it as the underlying motivational drive for the entire LP, reaching out to all the other afterparty babies of the world; in Weapon’s own words: “This one goes out to all the accidents… Keep on making mistakes”.

But it’s not just the amiable sentiment behind Cadence’s record that makes it so distinctive; this rapper’s managed to tap into that grey area in hip-hop which leaves people rubbing their foreheads in confusion. To clarify: everybody expects certain things from genres of music, and rap in particular seems to suffer time and time again from people creating clichés around the music that it truly does not deserve. You know the ones – booty, bass, thug, G, pimp, et cetera. But once in a while, an artist emerges out of a regional hip-hop scene that manages to bypass popular pre-conceived perceptions on hip-hop with such ease and grace that it leaves the usually dubious listener entirely captivated (and somewhat distraught).

‘Do I Miss My Friends?’ opens Afterparty Babies with a single solitary hummed vocal melody, gradually progressing into a chanted and rhythmic chorus, accompanied by Weapon’s prose-like and conversational-in-delivery style of rap – and literally sounds like nothing I’ve ever heard. As I’m listening, I feel like I’m involved in a discussion with an old friend, and not just any old friend, but someone I grew up with who has an angle that I both love and hate: Unlike my new ‘cool’ friends, this person knows me for who I really am – the fat kid in 6th grade who ate his own boogers and stole cookie dough from the school cafeteria. And he can expose me at any time.

But as the album progresses, you begin to feel more comfortable that your new friend Cadence Weapon is in the same boat with you; he has cool new friends in big cities, and therefore he has to impress them and make them dance with disco-break-beat numbers like single ‘In Search of the Youth Crew’ and self-explanatory ‘House Music’. His words on ‘Messages Matter’ are utterly innovative – “when I spit, the words say glisten, ‘cause where I’m from, all the birds stay and listen” claims Cadence, only to follow with “… now what the fuck is that supposed to mean?”. Not only is this rapper extraordinarily gifted, he’s also completely honest and manages to say more with his seemingly stream of consciousness style lyrics than the ever-scripted Guru, of Gang Starr fame.

Musically, so much is going on here. Influences of all kinds bombard you from song to song: Prefuse 73-esque glitch-hop stylings on ‘Limited Edition OJ Slammer’; IDM-tinged, noisy thumping in the style of Autechre number ‘Tattoos (And What They Really Look Like)’; and even a radio-friendly summer jam, ‘Real Estate’, which should have Lupe Fiasco and Kanye West cupping their balls in fear. Yet the element of the music which is so important, and so different on Afterparty Babies, is that the beat behind all the songs doesn’t seem so important to Weapon’s music, but rather the sounds which surround those beats and the complex, swirling melodies that they create. I mean, I love beats – fat ones, thick ones, TR-808 kicks – but it’s nice to be confronted with a hip-hop album that isn’t too concerned with how heavy the beats are on it.

Honestly, I’ve re-written this review like 98 times because Cadence Weapon, and Afterparty Babies, is just too good. I can’t do it justice. It’s just brilliant. Nothing I can write will change that. I’ll just stop here.

…And Mike Diver is gonna kick my ass if he doesn’t have this review soon.