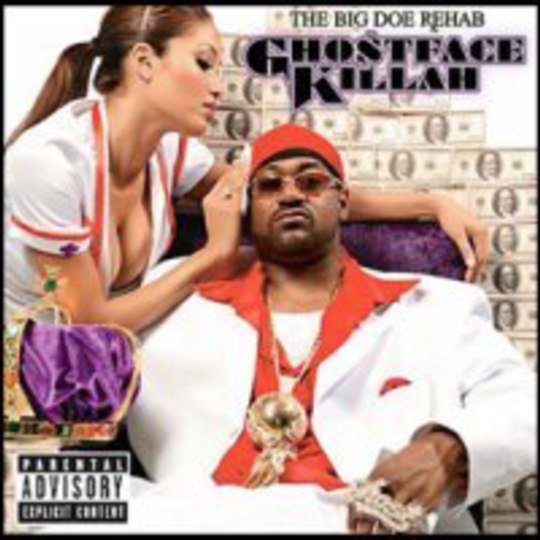 There was always something gently deranged about their antics beforehand, but who knows what the water got dosed with when Ghostface Killah and MF DOOM hooked up with Madlib for the ever-elusive Swift And Changeable, because ever since then the pair sure have seemed strange.

Though S&C remains unreleased, after pairing up with Ghostface for a good batch of tracks on 2006’s imperious Fishscale, MF’s mind seems to have since wandered and while Ghostface and DOOM have always erred on the side of insanity (see cover artwork: crowns, dollars and hanging mammaries born from an apparently panic-stricken dream of GF’s), DOOM’s recent decline and absence from the production roster for Big Doe Rehab is notable. Ghostface has also seemed suitably broken-brained recently, with the release of a Ghostface doll that exclaims “Remember when I long-dicked you and broke your ovary” a decent showcase of his unattractive tendency to flirt with misogyny and close to being as bizarre as GFK online poker and his peculiar penchant for Clark's Wallabees. “Don't put me in no mental clinics” protests Ghostface on this outing. No promises, eh?

Away from 8 Diagrams’s drifting tendencies and guffy John Frusciante riffs, you can see why Ghostface was aggrieved when it was announced that Wu-Tang were due to release their first record for six years on the same date of release as …Rehab. GFK’s output has been an increasingly distant venture from the Staten Island collective and where production credits were endlessly attributed to RZA in the stages where each of the nine core members began to break off for their own solo pursuits, Ghostface has pursued other avenues, away from his old flatmate RZA’s domineering shadow. Sure, as with the ‘all Wu in for a sing-song’ of ‘9 Milli Bros.’ provided on Fishscale, there’s regular references and hands held with the cohorts – especially Raekwon – but it’s increasingly evident that Ghost relishes the opportunity to step out on his own, distant from the Wu fanfare, dubiously stating “First off yo, you ain’t my peeps, I know we’re from the same town and shit but we ain’t that deep” on ‘I’ll Die For You’.

Ghostface’s renown seems strange when you consider he was a reasonably bit-part player until he showed his worth on Raekwon’s Only Built 4 Cuban Linx (1995), before appearing in his Ironman guise - one employed to detail his struggle with diabetes - an outing the following year for his debut. From there each record has trumped its preceding effort, with Fishscale last year detailing crack wrap smuggling services with a soul-sampling panache. Critics lauded its brilliance as Ghostface started to cement his unlikely status as Wu’s newfound centrepiece.

Far less immediate and imposing than Fishscale, …Rehab is far closer to 2001’s Supreme Clientele; still with the focus on the ever-present soul samples, but without the relentless litter of potent hooks its predecessor threw up. ‘Toney Sigel a.k.a. The Barrell Brother’ opens with riffs darting with a familiar gusto as Ghostface and Beanie Sigel declare how 'real' they still are, when in truth Ghostface’s unhinged brilliance is about as far from real as it comes. That’s why it’s difficult to pin down GF’s straight-faced perspective - it's possible to either take ‘White Linen’ as some overblown skit paying his dues or as a sideways snipe at hip-hop’s Evian-quaffing elite sliding shoulders with Robin Williams, Norah Jones and Lenny Kravitz, as Ghost and Shawn Wigs knock out a welcome for the infamous Californian three-way of wenches – Hilton, Lohan and Spears – with the suggestion there’s no snatches on display (“no more free looks, you’ve got to put in work to get a glimpse”). Though incessant sexism regularly rears up with Ghostface, where he was previously guilty of endlessly using the tired put-down of “faggot”, he’s recently toned down this ‘unfortunate habit’.

But largely, …Rehab fails to hit the spot as relentlessly as it did on the last few outings. Away from the pangs of brutality ‘Walk Around’ summarises as an unremittingly bleak tale of the vomit-spitting aftermath from a debutante’s store shooting, highlights range from ‘We Celebrate’’s intoxicating drones and quick-tongued remarks and Christette Michael’s rasping vocal on curtain-closer ’Slow Down’. But these moments are far less regular than Ghostface’s last few ventures have offered up as ...Rehab begs for a RZA or DOOM to oversee events.

Open the inlay and laundering and laundry seem to merge as one as Ghostface and affiliates wash $100 bills and roll them out in flour. Whatever metaphor’s being played out it seems safe to say the Staten Island statesman is not of sound mind and though never quite reaching previous remarkable peaks scaled, Big Doe Rehab is another valuable insight into the skewed world of Ghostface away from Wu’s taming Shaolin stylings.