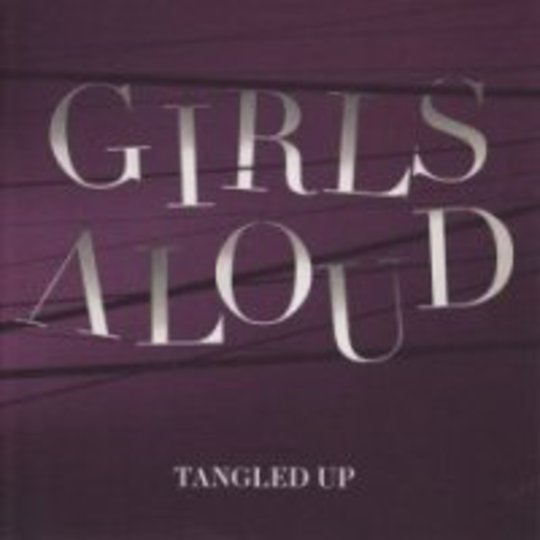 Daddy raised me as a gambling man, so let me give you a nap prediction for the day: Tangled Up, the third album by critically acclaimed reality pop act Girls Aloud, will not receive a single negative review in any major mainstream newspaper, website, or music publication. If you want to place an accumulator bet, here’s my ‘next best’ prediction: all of these reviews, when laid end-to-end, will not contain a solitary speck of insight, intelligent comment, or accurate explanation for why Girls Aloud have become elevated to the position of unimpeachable icon figures for contemporary pop.

Back up for a while though, concentrate on the music. Girls Aloud have, admittedly, made a bunch of good-to-kinda-great singles in their career, at least five by my reckoning. At their best, they function as a kind of über-office Christmas party band: all of your pop faves, just done with less intelligence and panache but more opportunities for you to devise your own bedroom dance routines. So ‘My Sharona’ becomes ‘No Good Advice’, ‘Addicted to Bass’ becomes ‘Sound of the Underground’, and even ‘Love Machine’ is little more than the sound of someone running in on The Stray Cats while they’re asleep and drawing a cock on Brian Setzer’s forehead in lipstick.

On Tangled Up, there’s none of this. The last thing any sane person would come to a Girls Aloud album for is the sign of original thought processes. As soon as Xenomania start burbling _“Hey, wait, here’s an idea nobody’s thought of before!”, someone needs to slap the taste out of their mouth immediately. Or, if you don’t want to conduct the violence yourself, maybe just tell Cheryl that Brian Higgins was actually born in Lagos. Sure, ‘Crocodile Tears’ here is certainly the first ever song to combine classical guitar, what sounds like synthesized pan pipes, and the rhythmic qualities of fucking Rialto into a Wall of Sound ballad, but that’s because it’s a stupid fucking idea for a song.

Tangled Up is a compendium of stupid fucking ideas for songs. ‘Control of the Knife’ has the same plodding beat, Europop noodlings, and lazy vocals you’d expect from the warm-up level on a Dance Dance Revolution machine. ‘What Are You Crying For’ is the sound of that Spice Girls album that didn’t sell, if they’d have taken out-of-date D&B instead of out-of-date R&B for a muse. Even comeback single ‘Sexy No No No’ is little more than a rejected studio take version of their earlier single ‘Wake Me Up’. Except, now, it has some stutter vocals as well. An amazing achievement that clearly required three years to come up with.

And they all sound so BORED. Nobody ever assumed that Girls Aloud were going to deliver the great vocal performance of the era, but back in the day they hit tracks with the same kind of pepped-up, girl gang enthusiasm that had seen female groups from The Crystals to Bananarama take it to a higher level than they perhaps deserved. Nowadays, I defy anyone to remember any lyrics from Tangled Up on the first, second, or third listen, such is the lack of emotion this whole record is performed with. The lyricists are fully aware of this, so the whole record is crammed with dumb non-sequiturs like “fling baby, swing baby, just a ding-a-ling baby” in a vain attempt to make any of this memorable.

Tangled Up isn’t horrid, or even bad, just stunningly mediocre. Indicative of matters as a whole is ‘Black Jacks’: it’s a perfectly perfunctory Radio Disney run-out, Hilary Duff-style soft rock complemented with a shouty cheerleader chorus. It’s okay, it’s acceptable, it sometimes even flirts with good; but there’s absolutely nothing here to recommend it above 200 other pop acts currently on the grind in interview segments on Nick Jr, or support slots for Hannah Montana tours. Nothing, except the bizarre cult of personality that has grown around GA.

Girls Aloud, like Bob Dylan and punk music in general, are just an excuse for music critics to stop thinking, shut off their critical faculties, and go “lalalala not listening” when you try and ask them where their all-consuming passion for this shit is actually coming from. Arguably no group has suffered as little real criticism in their career.

And why? Are Girls Aloud fantastic? No. Are they great? No. Are they the focus point for the gurgling of mid-life crisis-suffering Wilco fans trying to prove that, hey, they like the pop music, who make up the majority of ‘intelligent’ music criticism these days? Bingo. Throw into the mix the nubile, by-line photo friendly girls in their mid-20s trying desperately to prove to their editors that they’re in touch with some sort of nebulous, ill-defined ‘youth’ out there (a shtick that reached its apogee when, for some reason, GA were interviewed by The New Statesman in order to help explain how teenagers feel about politics these days), and you have a recipe for what amounts to unthinking, unblinking, wholesale acceptance of a band with maybe five good songs.

At the end of the day here, it’s not even that the emperor has no clothes on, it’s just that all he’s wearing is some shit from River Island and we’re treating him like he’s a fashion guru because of this.

But then again, what do I know about girl group pop? I’m just bitter that The 411 never made it to a second album. Now ‘Dumb’, there’s a straight-up banger.