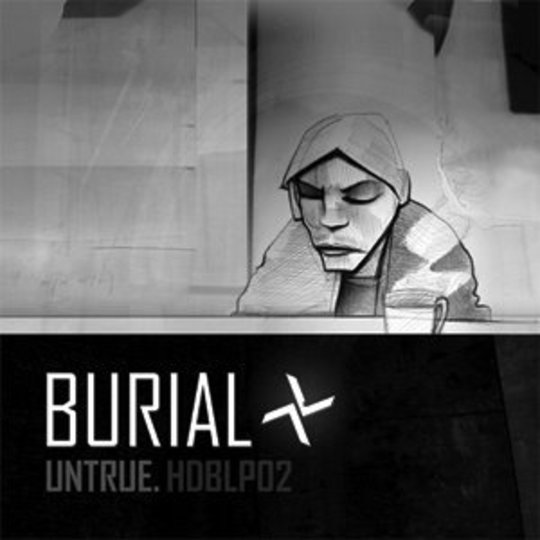 _ "This mix is a work of art in itself. I have to say I think it’s the most wonderful mosaic of sound I’ve ever heard in my whole life, it doesn’t even sound like it was made on this Earth, it could be a transmission from a star in a galaxy far far away... and I don’t know about you, but this excites senses deep in my soul that I didn’t even know I had, and it makes me feel like I’m falling in love with music at a completely different and way deeper level… Burial let the curtain fall, the stage is yours. Life and sound will never be the same again…”_

The words of Mary Anne Hobbes. More sentiment to follow…

I imagined Burial’s first album too perfect, too crystallized in context to attempt repeating. For me it was the sound of the double-helix of life and music entwining; London was finally opening up with nightbus after nightbus flying past like rolling years down cheeks, and things finally felt different. Surely, thought I, nothing could add to such a period piece…

In fact, it turns out Untrue had no shadow to escape, simply because his debut was sunless. With the rolling half-step and pitchshifted vocals obvious nods to jungle and early garage, it seems more a prequel; the highs before last year’s comedown. Pair this with his obvious individuality and there’s an originality, regression controlled and contrasted with disorientating progression. In words from his label owner and mentor Kode9’s debut: “One step forwards / two step back / twisting the lines out of all recognition”.

That’s not to say most ears will find this too similar to his debut, especially as you can only imagine Untrue with the same muted metaphors as befitted the first. Still evoking his music as evening rain, strobing streetlights, passing trains, does lose his definition to repetition. If this album does carry the same trembling resonances, the same vivid ‘scapes of post-club echoes, morning nightbusses, and zen’d out walks home, it’s because there is only so much so you can render in greyscale.

It’s close minded to contextualize too much when it’s clear this album can exist without the previous, likewise Burial the person from Burial the producer. The moments of real beauty here are plentiful; the relief as ‘In McDonalds’ sandwiches_ ‘Etched Headplate’_ and the title track from collapsing in on themselves; the sheer euphoria as it fades back into ‘Shell Of Light’; the agonized release when the album finally locks into circular 4/4 rhythm on ‘Raver’, and the mounting pressure, like the album itself, recedes to nothing.

What gives this album more depth is the focus, the rolling symmetry and cinema. There are no attempts to crowbar dubstep tracks - see ‘Wounder’ or_ ‘Spaceape’_ from his debut - into the album, and the addition of twisted, pitched vocals add moments of snatched euphoria amidst the dread, humanity to the grind. The wailing asexual come-ons of ‘Etched Headplate’ and_ ‘Endorphin’_ sit uncomfortably with the prevailing atmosphere, like Burial’s traveled so far in night he’s come out in the lights of morning.

And it’s from the dark that Burial glows brightest. He’s never going to attract too far outside his niche, but to the right ears and in the right context this is unbeatable, unspeakably romantic, epoch defining. The strength of this record lies in yourself.

_ “When I'm awake all night, sometimes I see the people and the city waking up around me. I feel a little bit moody at them for stepping into my night-time. What I want is that feeling when you're in the rain, or a storm. It's a shiver at the edge of your mind, an atmosphere of hearing a sad, distant sound, but it seems closer - like it's just for you.”_

A. Mine’s down the Old Kent Road…