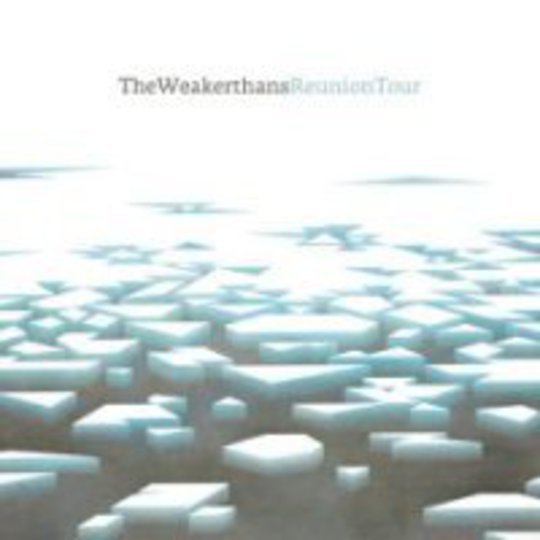 The fourth album from Winninpeg, Manitoba’s The Weakerthans serves, above all, as a fine showcase for the convincingly eloquent, profoundly melancholy, uncomfortably human characters played by frontman John K Samson.

Reunion Tour starts and ends strongly, with the band playing to their strengths. Three of the opening four numbers are rollicking folk/punk efforts, Samson’s tender recitals acting as poignant counterpoints. On ‘Relative Surplus Value’, he assumes the role of a businessman with personal problems which are beginning to spill over into his work. There’s great sensitivity, a healthy self-consciousness and no little sprinkling of humour to Samson‘s penmanship - “Sit on the concrete… some girl throws a dime in my lap / You won’t be laughing when you hear how this one ends.” The brilliant ‘Tournament Of Hearts’, meanwhile, sees Samson play a sportswoman attempting to bury her personal problems (there’s that phrase again) in a curling match, concluding with the dawning realisation, “I’m always throwing hack-weight”. Check your curling terminology for that one, kids.

It’s crucial to the success of Samson’s portrayals that the characters’ emotions manifest themselves in a tangible way - the businessman being “down 12 points”, the curler costing her teammates the match - as it makes them more real, their problems more appreciable, their strife more weighty. It’s this preoccupation with tangibility and practicality that informs the excellent final track, the mournful prayer of ‘Utilities’, where Samson expresses his feelings of worthlessness in a world where things simply need to get done: “I just wish I were a toothbrush or a solder gun / Make me something somebody can use”.

While the lyrics remain exemplary throughout, the musical compositions can’t always keep up. ‘Virtute The Cat Explains Her Departure’ is no stinker by any means, but compares badly to the company it keeps on this record. Similarly, the spoken-word ‘Elegy For Gump Worsley’ is an experiment which doesn’t quite come off. But these are minor gripes, as, all things considered, this is a record of high quality, and a vehicle for a storyteller of uncommon faculty.