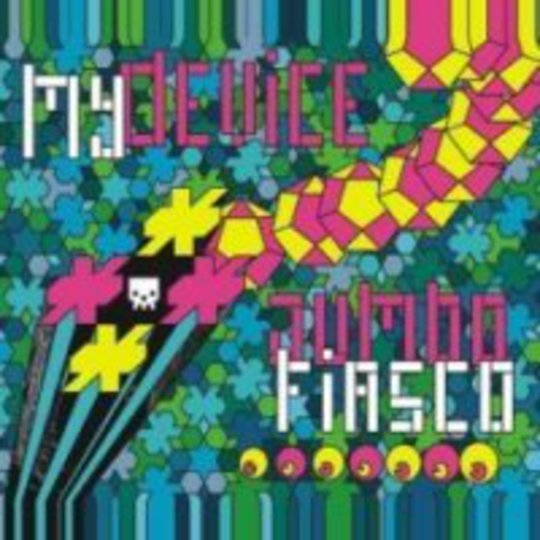 Brighton’s* My Device *are mental. To be perfectly honest, the second opening track ‘Uh!’ _began, with its squeaking guitar and juddering rhythm, I thought they might be a bit shit. Fifty-four seconds in though and the triumphant cry of _“Ariba!” made me grin like a fool.

This band doesn’t sit still for a second; there are not even any gaps between songs and the pace is relentless. ‘Life Is A Blast’ _is strangely melodic considering the breakneck pace of the previous track, ‘Show Me The Ropes’ (apparently about dolphins – yeah, me neither), once again showcasing that stuttering rhythm and winding guitar, while ‘Super Tonio!’ _sounds like a room full of kids with attention deficit disorder, effortlessly thrashing through the song with a catchy as hell chorus and super-loud shredding guitars, leaving you breathless after barely two minutes.

‘Fixxa Uppa’ is the standout track – pumping basslines, angry vocals with a great_ “woah woah woah”_ chorus and drums that sound so fast they simply can’t have a human behind them. ‘Rusty Trombone’ _disappointingly only features a couple of seconds of actual trombone but the singer does display a faintly absurd pompous accent so that’s alright then; _‘My Bear’ is raucous post-punk with distorted guitars and a shouted chorus; ‘Slamming Doors’ is the longest song on the album and, unfortunately, one of the worst. It’s a bit pedestrian compared to the rest of the album and, dare I say it, a bit ‘classic rock’ in places, some nice vocals though.

The bouncy guitar of_ ‘Everything Is Inflatable’ is nicely apt, as is the crunchy, almost surf-like bass, making a fairly sparse song feel strangely euphoric; ‘Burn Burn Burn Etc’ features that robot drummer again, schizophrenic guitars and stop/start shouty bits; and closing track ‘That Girl Don’t Got No Shoes On’ _sounds a bit like the Futureheads in places with pleasant melodic vocals and buzzsaw guitars.

With barely any of the songs coming in at over three minutes, My Device offer fourteen tracks of completely insane and extremely fun post-punk. I’m not sure how long it’d manage to stay in the CD player though, as it’s pretty exhausting to listen to, but they’ll definitely be a hit on the dancefloor of every indie disco.