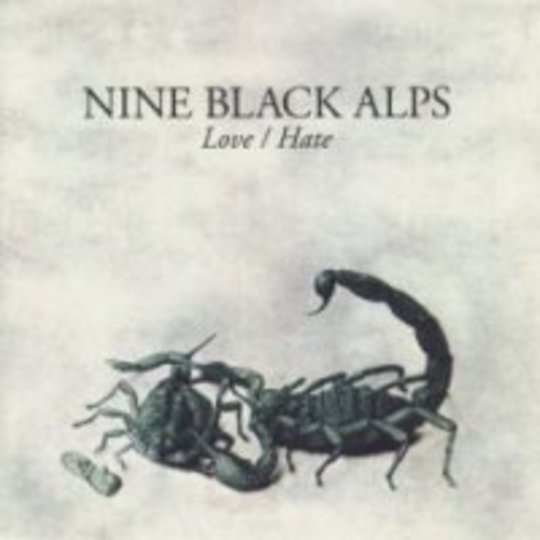 They first went over as grunge tourists with debut Everything Is and now, with second album Love/Hate, Nine Black Alps have successfully crafted the musical equivalent of a green card application. Rarely has a British band of the past five years been so deserving of a US post code and flux capacitor-powered DeLorean to transport them back to the flannel covered, Doc Martin-wearing days of the early ‘90s.

Not that this is necessarily a bad thing. There are far worse crimes in the world than trading in the power-chord driven rock that characterised classic records by the likes of the Pixies, Nirvana and Sebadoh. Great records are great records after all, and frontman Sam Forrest and co. are certainly unabashed in expressing their love of said influences. Even to the point of heading straight to LA, hanging out in hip Silverlake and recording songs up in the Hollywood Hills with an alt-rock mega-producer to get the sound just right.

The result still has the same grunge backbone that’s been their calling card since day one, but this time they’ve let a bit of that Californian sun in through the cracks on tracks like opener ‘Bitter End’ _and ‘Everytime I Turn’. Both songs slather a pop sheen onto the band’s former angst while pledging allegiance to the brighter moments of the Lemonheads’ back catalogue. Yet if it’s the sludgy, grungy, darker tunes of old you crave, then don’t fret: ‘Heavier Than Water’_ finds Forrest tackling lyrics like, “I can’t stand to hear you talking like I don’t exist”_ with the gruff pomp you’d expect from a lad weaned in the church of Cobain.

Nine Black Alps have proven themselves capable of producing the kind of alt.rock that so obviously influenced them in their youths with_ Love/Hate. None of these songs would sound out of place if you heard them blasted on an average US radio station. And that’s where the fault lies. Love/Hate _ticks all the alt. boxes and does paint-by-numbers early ‘90s rock beautifully, but it fails to scratch beneath the surface. Nothing here strives to break any boundaries or push away from the norm the way Black Francis or J. Mascis did back in the day. If Nine Black Alps are looking for entry into the trad-rockers union, then they’ve found their golden ticket with this record. Though they better buy a map if they’re truly looking to follow in the footsteps of their heroes, because at the moment they sound like they’re walking farther and farther away from their desired destination.