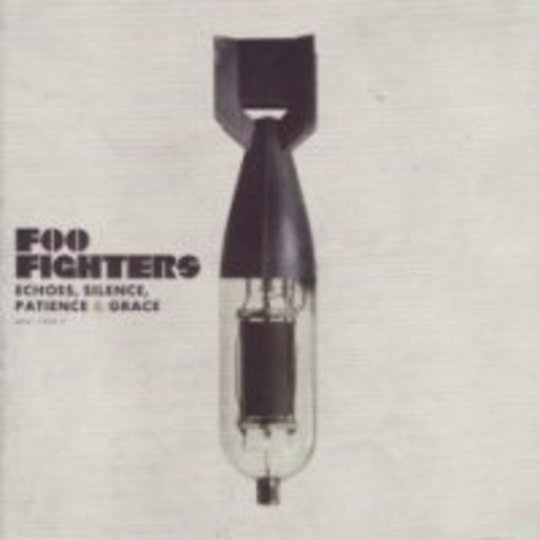 You know who’s a funny guy? That Dave Grohl. That whole ‘dressing up as a woman’ shtick he pulls out for Foo Fighters videos? Man, that always brings a smile to my face. Clowning it up with Tenacious D? Straight comedy genius. And his and the Foo Fighters’ longstanding support for and advocacy of the American pressure group Alive & Well who campaign, amongst other things, for AIDS medication to not be sent to Africa because the ‘AIDS epidemic’ is actually hysteria whipped up by the pharmaceutical industry? I laughed so much a little pee came out.* **

So Dave’s band are six albums deep now, and they’ve always been a group as clearly in love with Led Zeppelin as they are with Alive & Well’s belief that the high incident rate of AIDS amongst homosexuals isn’t because AIDS is a sexually transmitted illness (because, apparently, it isn’t), but because gays are mainly junkie intravenous drug addicts who can’t help but share needles all the time. Maybe recent single ‘The Pretender’ would cut it as a high school talent show take on IV_, but as a welcome back single for a band who are meant to, you know, _rock? Not even close.

Some of the stuff on here, songs like ‘Let It Die’ and ‘Come Alive’, with their quiet-quiet-LOUD-quiet-quiet-LOUD dynamics, show an admirable dedication towards keeping the spirit of the 1990s alive. Then again, so would covering the theme tune to_ Hangin’ With Mr Cooper_. And at least you could dance to that. As it stands, right now, Foo Fighters sound like a band lacking in energy. They sound as bereft of life as Eliza Jane Scovill, the daughter of Alive & Well founder Christine Maggiore, who died of pneumonia aged three weeks old. A post-mortem showed advanced AIDS. Maggiore’s organisation has long argued that pregnant women should not take antiretroviral medication preventing the spread of HIV to their children.

Echoes, Silence, Patience & Grace is worth comparing with 2007’s stillborn Marilyn Manson effort, as it also contains a sly dig at emo (entitled ‘Cheer Up Boys (Your Make Up Is Running)’, not so much a song title as novelty t-shirt slogan), and even with recent efforts by Nine Inch Nails and Smashing Pumpkins. When they try and go for a more mature sound, you can’t help but wonder why they aren’t turning the amps up and flailing their limbs around like they used to back in the day. When they do try and go back to that more sprightly sound of their younger days, you realise that you’re not as young as you used to be, and they certainly aren’t: Foo Fighters are now flabby, creaky, and worst of all past it. It’s got to be hard for survivors of the mid ‘90s rock boom to realise that they’re as relevant to, or needed by, today’s generation as Styx and Foreigner were to their fanbases back in 1995. It comes to a sorry state when a Red Hot Chili Peppers-style descent into Radio 2 AOR seems like the best option but... well, Foo Fighters have made worse career choices. Like deciding to offer unconditional support to an organisation that believe that all HIV-test results are inaccurate.

Lazy sarcastic zings aside, Foo Fighters always have been a truly mediocre act that built themselves a 12-year-long career based on a brace of half-decent singles (‘This Is A Call’ and ‘Monkey Wrench’), the utterly fake notion that Dave Grohl is a genuine ‘nice guy’ rather than some rock ‘n’ roll Ned Flanders, and a shitload of good will they’ve been afforded based solely on the fact that their frontman used to be the least important member of a dead guy’s band. Face facts: if it had been Evan Dando turning a shotgun on himself back in the summer of ’94, the drummer from The Lemonheads could have sold 15 million records by now.

But sure, if it comes down to a choice between throwing down £12.99 on this album or giving it to a charity that’ll send the money to a seven-year-old Namibian boy screaming out in agonised pain because of the mass of tumourous nodules that have colonised his skin, you should definitely buy Echoes, Silence, Patience & Grace. The African kid will only spend the money on Panini stickers. What else is he gonna do with it?

*Further reading: official A&W website, critical _Mother Jones article and Wikipedia; it must be noted that the band no longer lists the campaign as something it supports on their official website, here - Ed._