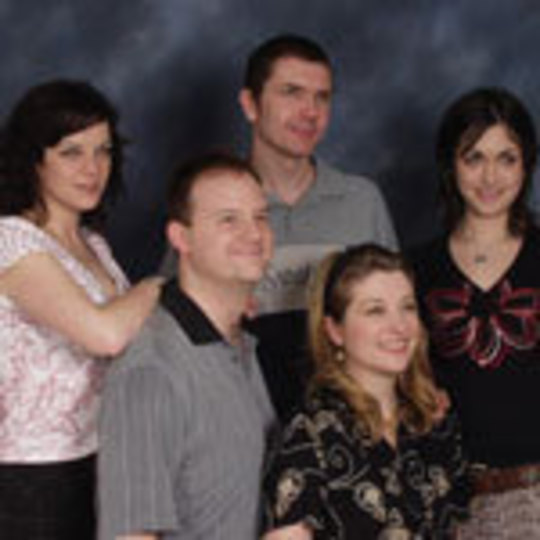 Shrag are a band from Brighton. There are a lot of bands in Brighton but Shrag are a bit special. For a start, technically they are an art collective not a band. They formed in the summer of 2003 and they don’t really have a band name, Shrag as it stands is an acronym. They don’t even have their own proper website, yet. Then there's their latest video for 'Talk to the Left', they appear to like polishing shiny brass things and Cliff Richard. The enigma of Shrag aside, what really brings this band a sidestep above the others is their songs and finally they have released a mini album of their best ones thus far.

The album opens with Bob’s wimpy indie-lite guitar on 'Pregnancy Scene' and there’s a slow build up with Leigh-Ann’s solid kick drum, then Russell’s post punk bass and finally Stephanie’s melodic keyboard, all shape shifting sequentially. This creates a certain level of anticipation that isn’t finally realised until a minute and a half into the song when Helen's articulate but shouty vocals start up. And then the chorus, Shrag do choruses so well: Oh and the pregnancy scene is making us green, makes us want to puke our guts up. Choruses that make you laugh, bemused, confused and happy. These are choruses to inspire your next bicarbonate bedroom invention, which could blow up in your face or blatantly wreck havoc in your neighbour’s newly landscaped front garden.

Next track is Mark E. Smith’ - indicating one of the bands influences that rears its head more in attitude and execution of ideas. The next song is 'Intelligent Theft' with the cheeky chorus: We made it out of the shop, we were looking at the things that we got but intelligent theft is hard and that’s why we were caught. Then there is angsty 'Cupboard Love' that emphasises the fact that Shrag produce bouncy catchy fruity funny punchy shouty songs to love, play naughty twister to and jump up and down on your bed to. The penultimate song here is latest single 'Talk to the Left' that is bound to strike a chord with many bohemian pseudo intellectual females having to deal with shags that talk more than do. Closing proceedings is 'Hopelessly Wasted', a slow, melancholy affair that shows that Shrag do care really and there’s more depth to them than their brassically sassy storytelling pop songs.

For now Shrag are still a little South East coast secret, but not for much longer, so cups to the door quick before they start to appear on the side of cornflake packets.