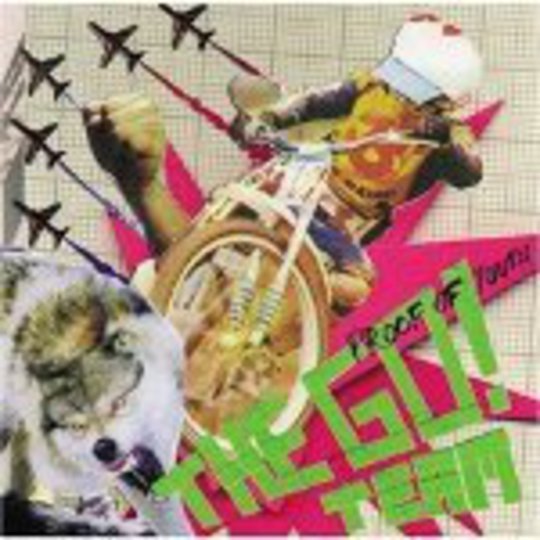 Honestly, I didn’t think The Go! Team could do it. There are certain debuts by certain bands I expect will be one-off success stories and future fodder for VH1 One Hit Wonder television specials. Apparently, lightning does strike twice. It has for The Go! Team at any rate.

Topping Thunder, Lightning, Strike wasn’t going to be an easy task – as the band’s in-between recordings proved, theirs is a delicate balance. It could be my perception of things, though; it could be that I’m so inundated with a succession of morose indie bands following in Joy Division’s footsteps that when I hear a band successfully create music with a childlike exuberance I immediately begin to think it was a fluke, or that the band will outgrow its sunny adolescence and descend into an awkward stage where the music becomes mired with glaring blemishes no amount of zit cream can hide.

On Proof of Youth, our gang of musical cheerleaders top its predecessor each step of the way. ‘Grip Like A Vice’ is the sort of song which must have all the Spice Girls swooning with envy and putting that reunion idea back on permanent hold. Besides, schilling the Spice Girls name across jeans and perfumes and hooking up with football icons has its own rewards, I suppose. Maybe that’s an unfair comparison though, because the Spice Girls always seemed like an advertising campaign whereas The Go! Team back up their fun with talent. The Go! Team, it turns out, have refined their one good trick into a better one. If I were writing this review as a single I’d call this song a perfect ten, it’s that good. Okay, maybe a nine, but seriously: who’s counting? I’m having too much fun! Still, I’m not convinced the rest of the album will hold up. What’s it going to take to make me a believer here?

The next track, that’s what. ‘Doing It Right’ isn’t a perfect ten either, but it’s solid enough for me to Google the band’s tour schedule because I’m not going to miss them this time around. I might even wear a pastel-colored shirt to the show!

About its midpoint the album does begin to lose a little of its steam, and by the end of the Proof of Youth I’m reminded why I spend so much of my music listening to psychologically amiss musicians moaning about the state of the world, girlfriends that lie, and the impulse to steal anything that isn’t nailed down. Those are the sort of subjects which occupy most of my mind’s eye, so it’s not a big leap to expect I enjoy music that reflects those things. So The Go! Team isn’t for everybody. DiS’s own Alex Denney wasn’t impressed with the ‘Grip Like A Vice’ single, for one (review). If The Go! Team’s singular lo-fi formula of chugging drum beats, smatterings of samples, happy marching band horns, and grade school cheerleading isn’t your cup of tea, then this album isn’t going to chart on your play list. If you’re like me though, and if you thought Thunder, Lightning, Strike was as close to sunny pop perfection as a retro ‘70s dance band could reasonably expect to get, then you’ve come to the right place. Proof of Youth is like a second helping of ice cream: just as tasty as the first! But I don’t know about a third helping, so I’ll probably have the same reservations I had for this album on the next time around. Let’s face it: if the New Pornographers weren’t up for the Challenge then how long can we expect The Go! Team’s wild aim to keep hitting the bull’s-eye? For now, let’s be thankful they did here.

_ Proof of Youth_ isn’t only a collection of ridiculous life affirmations for 15-year-old girls, it’s equally infectious for hopelessly optimistic old guys like me. Count the number of exclamation points in this review if you don’t believe me. I enjoy being transported back to the ‘70s, back in time to when ‘funky’ described Parliament and not month-old cottage cheese, when KC & the Sunshine Band pined for nothing more than the women on the disco dance floor to shake their booties, and when_ Starsky & Hutch_ and Wonder Woman ruled American television. There’s no better way than having these kids from Brighton to take me there. Shish-boom-bah!