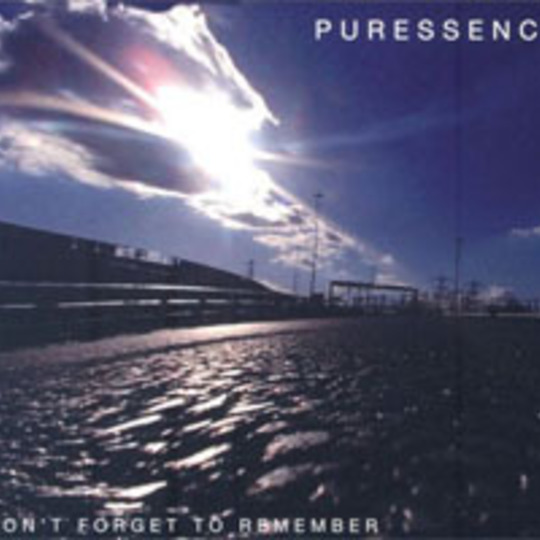 There are innumerable tedious and derivatives music scenes in England; yet surely none are more reactionary, inward looking, creatively bankrupt and generally vacuous than northern, particularly Manchester-based, indie. By which I don’t mean Hacienda stuff (or even The Smiths, who were good enough to transcend the tag), but the dreary, derivative drivel that followed (Primal Scream, Kasabian, blah blah blah).

On their MySpace Puressence have an endorsement from Mani; on the mp3 he drawls, “this band are from my hometown… this track is a belter!” Which kind of sums it all up really; a sort of dry, sad provincialism that clouds the fact that listening to Puressence is about as spiritually fulfilling as having a Carling spilt over you at 5th Avenue.

The extraordinarily titled Don't Forget To Remember (what am I supposed to not forget to remember? What? What?!) is, improbably, the band’s fourth album. You can literally hear the influences rolling themselves out of the speakers: those warbly The Verve-like vocals, layered over guitars the band would probably describe as ‘soaring’ (presumably with The Stone Roses or early Radiohead in mind), which instead sit drably on each track like a sludgy, lifeless, bepuddled carpet. ‘Drop Down to Earth’ sounds unnervingly like James, so formulaic it’s painful (quiet verse, ‘soaring’ chorus, pointless guitar riff; repeat). Weirdly, at times the band morph from Madchester indie-by-numbers to overtly melodramatic balladry; ‘Don’t Know Any Better’ sounds like something Michael Ball might sing, or a strange Andrew Lloyd Webber cast-off. As much as this seems like an attempt to sound more ‘nuanced’ or intelligent, the band just don’t have the know-how to make it sound anything other than dull. All the while the group have strangely downbeat lyrics (“life comes down hard / It won’t be long ‘til all this hell surrounds me”) that sit slightly at odds with the guitars, drenched as they are in ketchup-think dollops of reverb.

All of which made the experience of listening to this record strangely depressing, from the sludgy, desperately uninspired music, to the self-consciously ‘powerful’ vocals that, with all their posturing, express an approximation of nothing. Even so, as much as I’d like to see this as yet another death rattle from the bloated carrion of northern indie, I can’t help but feel there’s another dusty, swaggering zombie waiting to lurch from the grave. Though I suppose it’s to the band's credit that my predominant reaction to Don't Forget To Remember was muted indifference, rather than genuine abhorrence.