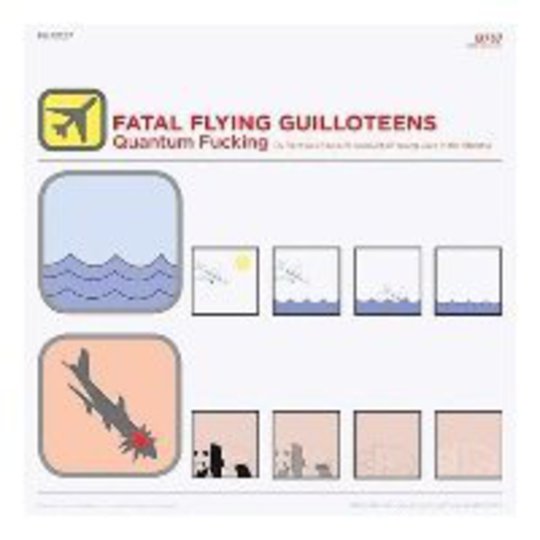 “Quantum Fucking : A fictitious true life account of young love in the streets…”

The sentiment is lost on foreign ears… “this fucking town we’re living in”. What town? These are London ears. They hear nothing but the grating of skinny jeans on flesh, Burial on the nightbus and the singing of sirens off the Queens Road. These lyrics paint small town grotesques by numbers, in ill focus, and I couldn’t be further away.

Anyway, the music._ Quantum Fucking _is nothing more than comic book porn; fun in the most perverse, messy ways, but inevitable and drawn out between the 10db money shots. Take away the intricacies and it’s just straightforward garage-punk masquerading as weird garage-prog. The riffs are discordant for discordance’s sake; not so much angular as easily protractorable, busying themselves into the straightest of lines. The rhythm section rackets, but with that terrible scratchy bass sound only hardcore kids think sounds good, cloying and impotent. Verses jerk and choruses falter; songs are selfishly misconstrued and misconstructed for nothing but their own design.

Tracks like ‘Reveal the Rats’ do carry a strange melody; but it’s a whisper lost amidst the sheer fury of trying to do things slightly differently. It’s meant to be primal, faltering, kiltering over by the nature of its existence, but there’s something inherently wrong with spazzed out gonzo so deliberately fashioned, honed, focused on being such that conversely everything seems as regular as a heart beat; no faltering, no pyschosis… It’s nothing if predictably chaotic; working Brownian motion in the lamest of mosh pits.

Fatal Flying Guillotines have the energy but nothing to do with it. Quantum Fucking is a dry wank.