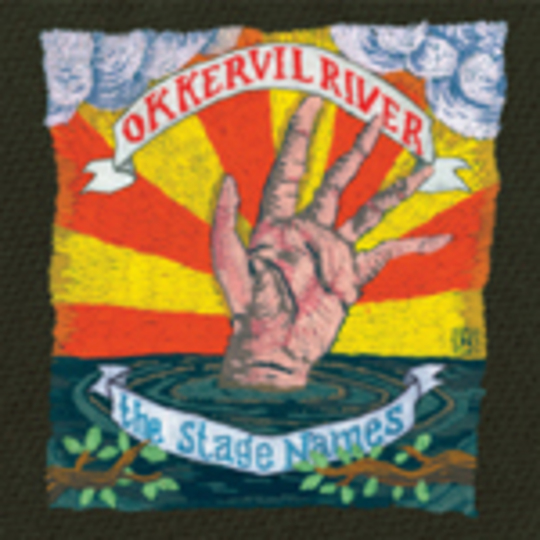 On the opening track of Okkervil River’s fifth studio offering, The Stage Names, lead singer and general all-round frontman Will Sheff ponders if his pouring out of the toils of his life on record resembles that of a movie. Well, hard to say. Let us elaborate on that for moment.

A movie must have a strong narrative, rising action, a climax and eventually some sort of denouement to signal the flick coming to an end. There is a steady stream of narrative rolling in and out of these songs and, like a good movie, there is a lot to follow, get latched into and stuck within. To start, Sheff explores much metaphorical depth swimming around his travelling soul, whilst fragile, self-reflexive lyrics dangle through heaps of instrumental chaos. A jolt of frolicking piano on one end, drum pinches that sound like an ominous stranger's footsteps on the other. A hymnal cloak of alternative country, gritty rock and swaths of folk blanket the songs, but nothing is overly asserted above all. Instead, these stage names are on the same team, pulling each other by the bootstraps and instructing them to keep up fighting, regardless of what struggle lies downwind. The end result: everything succeeds and fails together.

Lyrically, Sheff has never been stronger. Musically, Black Sheep Boy still retains ‘best of’ in the canon, but The Stage Names is not far off. Simple, patient, dreary (in a good way) music dominates this soundtrack, providing the perfect accompaniment for Sheff to wail off about doctor and patient sex in a shrink office, society’s pervasive attraction to celebrity and the plights of aging, among other topics. I could list them off, but that is not the point here; it is the overarching crap we all accept that must be approached, not the effects shrouding the cause.

As with all albums – all albums – some moments pierce deeper than others. ‘Plus One’ is probably the best song the band has ever written, save ‘The President’s Dead’; it whimsically meanders through countless images, symbols and chords, all led by the constant protruding shake of a tambourine. Very few bands compile such gems on the heels of a tambourine, structured silence and insultingly consonant piano pulls, but when Sheff is at his best, he is one of the best. Continuing the trend, much of the same story goes for our aforesaid opening ditty, ‘Our Life is Not a Movie or Maybe’, and ‘Title Track’, a song Sheff must’ve stolen outright from Neil Young’s bedroom. It starts off loud, pounding the stereo to let off some steam before letting go of its ardour to allow a true introspective feast of fancy in for five minutes. It is that silence – Sheff holding back, his emotive swoon and a deeply pensive brutality hidden beneath – that drives this narrative. It is all there, bang on, suffocating.

Yet, this album is not worth pining over from song to song. Like a movie, it is the sum of its parts that ultimately makes the difference, and without the organisation and flow Okkervil River attach to this, some of these numbers may have ended up lost in their own world. There’s a punk ethos of sorts, many whisks and whirls combining to form this singularly solid blast, powerful stuff indeed. These songs sound like a subway train as it darts past a station, forgetting to stop; they sound like a baby crying, or a frustrated, whiskey lubricated troubadour tapping the table with two fingers because there is nothing else to do. All the pain that comes from this incessant staging of life, this constant fight to keep things pure and free from preservatives, is here. Life is flawed; get over it.

So maybe this is not a movie. Most Hollywood flicks end with some sort of resolve, a kind heart to give to the audience to reassure them that regardless of blood loss, everything is okay. The Stage Names is but further proof that everything is_ not_ okay in the world of Okkervil River.