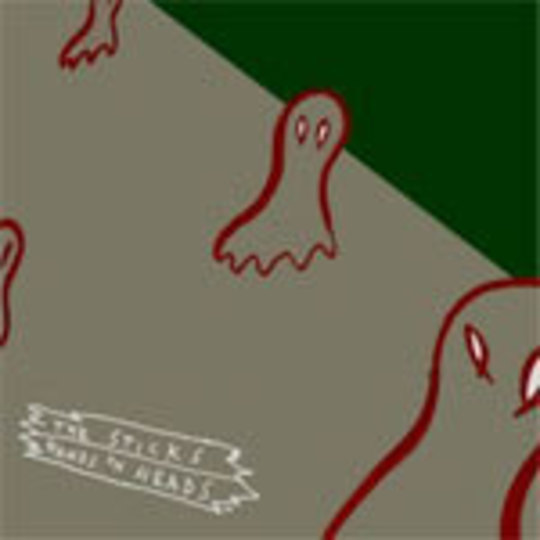 Hands on Heads are the whitest band alive. Their nervous, trebly, dizzy racket is the sound of a balding middle manager regressing to playschool state, wrapping his jaws round a tin fence and then pissing himself. In a way, it’s probably the most annoying thing I’ve ever, ever heard. In another, it edges furtively towards a kind of knife-point brilliance.

For when the carousel of whirring guitars and crashing cymbals lets its wooden horses rest, doses of ‘pop’ are injected into the space left behind and the whole thing seems momentarily worthwhile. They aren’t even particularly glorious doses – it’s just that the illness Hands on Heads manage to transmit to me through ten minutes of sonic contagion gives me so much itch that I want to take that dose and rub it all over my skin like a sweet, soothing lotion.

They lighten up by the end of the ten, ‘Both Brains’ and ‘Romantic Aorta’ slowing down to allow those melodies respite; room in the mess for attachment to grow like Stockholm Syndrome in the reflection of a captor’s knife.

Sliding down the other side of the blade proves to be just as sore, if not quite as unsettling. The Sticks make noise with instruments, but their real allies are the valve amps they toast ‘til there’s smoke and the smell of burning plastic in the garage air. This is serf rock, caustic bluster that strips away at itself until aforementioned instruments lock into the singular death rhythm of an ailing parade; aforementioned instruments an animal each, but apart and with no chance of the breeding. Drum hog mounts one-winged guitar hawk and the song keels over wailing.

Production wise it’s easy to pin songs like ‘On The Sea’ with the same flag hoisted by early Black Lips, but this is less amiable – at least on first listen – The Sticks' punk preferring to weed where the ‘Lips flower. 'The Floor, The Ground'_ is another example of this, while 'Destroy The Myth' is the sort of Batman and Robin noise you'd get if the Sidewalk Surfers had Suicidal Tendencies.

It's all over after 'Tribute To The Open Road' struts into view with its American capitalisation, petrol fumes surrendering to 30 seconds of bird song as the split slides out of view.

The Sticks are from Brighton.