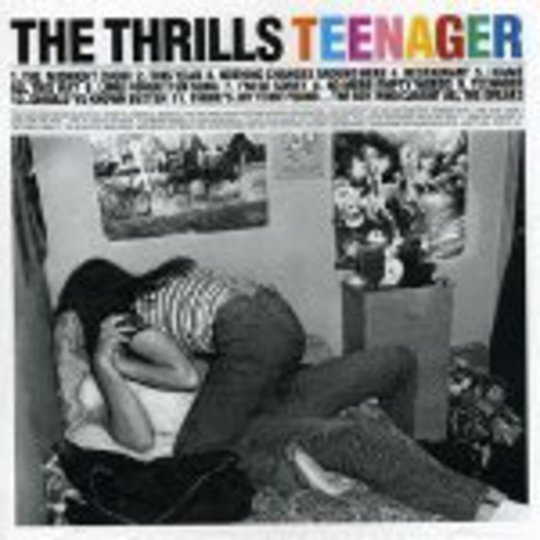 Forgotten men of glorious indie-pop summers past, rather, The Thrills’ formula for crafting enjoyably middling compositions – a wink to the west coast, a nudge the way of their Irish upbringings – might not qualify as the stuff of rocket science, but why dramatically change the record when it’s clearly not broken? Fashion comes and goes, music bends and creaks and creases and shatters, but quality shines regardless of trends temporary and movements fleeting. And The Thrills are an act of a quality worthy of back-slapping congratulations and broad-smile salutations.

Teenager doesn’t burst from the blocks, look-at-me impetuousness and brazen boisterousness; its makers are too relaxed of mind and content of heart, apparently, to allow their musical offerings to be any other way but politely genteel. Keen not to regurgitate the commercially successful but critically hmm sound of Let’s Bottle Bohemia, album number two of 2004 which effectively carbon-copied their breakthrough So Much For The City debut of a year earlier, vocalist and core songwriter Conor Deasy and company have attempted a level of introspection and understated emotional honesty that, largely, comes up trumps. ‘I Came All This Way’ is an ache in the guts (and the heart) set to an up-tempo acoustic backing that presses all the fall-apart buttons in the right order; lead single ‘Nothing Changes Round Here’ has the makings of a pop classic amongst a catalogue of mid-level highs; and the album’s title track is a woozy waltz that winds the listener into a dizzied state of fluttered eyelids and promises yet to be delivered.

Teenager is consistently rewarding, then; what it lacks though is bite – an underbelly of angst and unrealised aggression – that would lend a fraught quality to songs begging for their sides to be a little more scuffed and bruised. Glossy production from Tony Hoffer ensures that stability is maintained – there’s a thread that runs straight and true throughout these eleven songs, as arrangements never once stray from the path marked pleasantly predictable – but it also fills the cracks that, had they been left exposed, might’ve made sceptics of The Thrills’ saccharine charms come around to their astute tunesmithery via a few more offerings acerbic.

Where _Teenager leaves The Thrills in 2007 is uncertain – the five-piece aren’t adhering to an approach certain to guarantee them commercial success in a market dominated by heavily-accented pop starlets and similarly inflected northern scamps; they’re not trading on their domestic roots, still focusing their affections on influences from across the sea (okay, ocean). But, a few years down the line, this will still sound as refreshingly out of time as it does today, while this year’s high-climbers will be faced with a rapid decay of artefacts unlikely to last the distance. Some change, some desperately so; The Thrills’ minor tweaks evident here have only steadied their footing and ensured longevity aplenty.