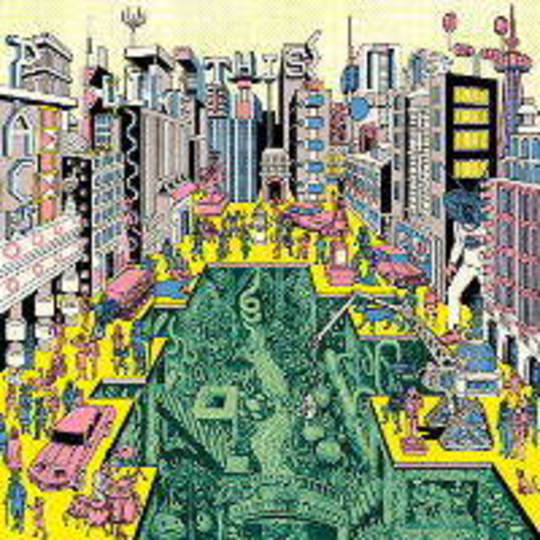 A twitch of giddy excitement quivered down my spine when Places Like This arrived in the post. It was as if I had finally found a solution to the wretched, sodden British summer. At that moment my mind was in absolutely no doubt: Architecture In Helsinki (AIH) – Australia’s heroically bizarre experimental-pop stalwarts - had returned to resurrect those long-forgotten days of inebriated tomfoolery under the baking hot sun.

2005’s sophomore record In Case We Die perfectly encapsulated summer’s carefree spirit. Horn-bulging trinkets like ‘It 5’ and ‘Wishbone’ gushed with an abstract ebullience that united everyone who fell under AIH’s mesmeric gaze. It was an album to fall in love with; only without the tedium of having to condition this affection. The childish hooks and screwball samples dropped inhibitions instantly and, in doing so, were cherished by all who had danced barefooted in dewy fields to its chaotic majesty.

Depressingly, this lacklustre introduction resonates throughout much of the record’s calypso-infused rigour. Bereft of the enriching production that seeped from_ In Case We Die’s intricate pores, every dog-boy yelp and Caribbean rhythm feels spurious and forced, as if the desire to explore new directions has disembowelled the innate quirkiness that made Architecture In Helsinki such a joyous proposition. Christ, there are times when it feels as flimsy as a _‘Meet The Flintstones’-era B-52’s, with tracks like the cowbell-ridden ‘Heart It Races’ and ‘Like It Or Not’ oozing forgettable plod-along ditties that resemble half-cocked Muppet Show cast-offs.

With such a sprawling array of instruments on offer, Places Like This is surprisingly one dimensional. The kaleidoscopic mesh of synths, chimes, bongos and brass should bulge in the eardrums, providing no respite from a cacophony of helter-skelter sonic spectrums; instead the melodies are blunt and compressed, as if pertaining to the compact demand’s of today’s mobile generation. Where once AIH would pirouette mid-track, abruptly transforming sumptuous pop throbs into berserk experimentation, they now seem content to loiter in ‘Feather In A Baseball Cap’’s linear electro-grind monotony. And that’s what’s truly infuriates because, for all its faults, Places Like This _ still manages to radiate glorious rays of breathtaking audio grandeur like _‘Lazy (Lazy)’ or ‘Debbie’, briefly resuscitating my belief in the band’s masterful lunacy as they whiz into the infectious party-kook pieces Islands execute so delectably.

So, it’s not quite a soul-shattering catastrophe but, for a band as progressive and ingenious as AIH, Places Like This feels like a monstrous step backwards. I guess this year I’ll just have to accept it: summer’s not going to come at all.