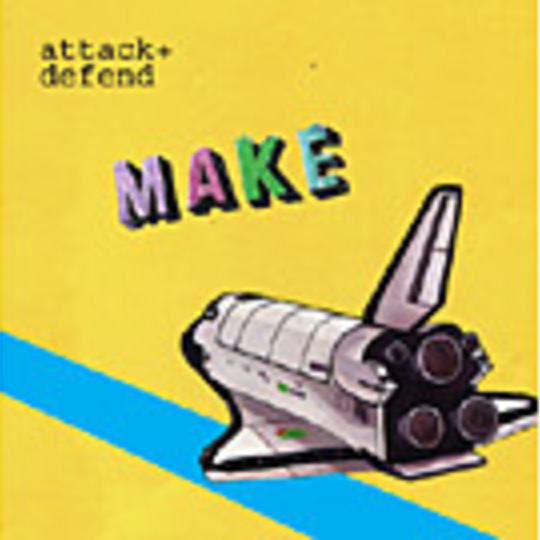 Attack + Defend are an odd bunch. No, really. Sounding as out of context as is humanly possible in 2007, while their roots undoubtedly lie in the Super Furries-dominated confines of experimentally poppy Wales, their real ambitions obviously stretch much further. Way back in time, if we're being perfectly honest.

Essentially made up of three brothers - Mark, John and Lee Thomas - Attack + Defend keep the sibling squabbles purely for the rehearsal room if Make is anything to go by, as the number of ideas and influences that have gone into creating this record simply exceeds the thoughts of one person alone. Surely?

At times it’s difficult to keep focused on where some of the songs are heading next, which I guess is all part of the fun, but also slightly disorientating too.

One thing Attack + Defend can never be accused of though is being genre conscious and ultimately slipping into a rut. With bits of Beefheart here, Bunnymen there and a general knack of writing tunes that sound as if they were conjured up in the early hours of a Monday morning while the rest of the world were sleeping, Make is an album that is high on innovation, even if there is an air of nonchalance throughout.

Tempo changes aplenty on the likes of 'For Phaelon Four' and 'Processwhore' almost turn this record into a game of guess the next key change, which does actually work quite well, even if those who prefer their pop music to be straightforward and direct may choose to disagree.

For all its idiosyncratic charm and quirkiness, Make is one of those records that you find yourself going back to, if only for reassurance that you weren't mistaken as to what you heard the first time. More importantly, Attack + Defend have managed to achieve something several more feted artistes have so far failed to do; throw everything you can find into one chaotic blender and make the end result sound anything but a squidgy mess. Intriguing.