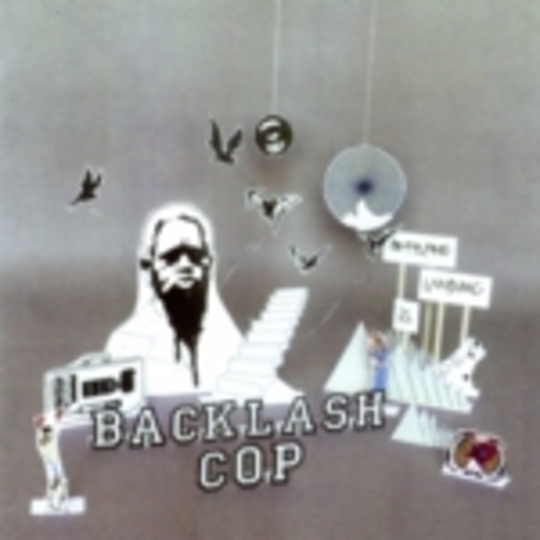 Remember that advert that purported the most commonly-used word in the English language to be “OK”? Well, I reckon mine might be “what?!” – I use it when I find I’m still eating stuff in my sleep, I use it when people nearby compliment Hard-Fi, and more recently I’ve used it in relation to Backlash Cop. For ages, I was left thoroughly puzzled by its sound and general feel, but I've finally figured out exactly what's going on.

Jetplane Landing’s third album can be a hard beast to tame; an erratic punk-rock-funk-insert-some-other-genre-here-probably concept album from a band whose previous work was largely delivered with an accessible rock sheen and so concentrated in places that it threatened to combust right in your face. So why, after just 87 seconds of the title-track opener, is Andrew Ferris referring to his “genitals.. wait, did I just say genitals?”? Moments later comes “I’ll get my tit out like Janet if she’s unavailable”, and I'm thoroughly confused. This is Jetplane Landing we’re talking about: inciters of riots, a maverick force to be reckoned with. Shouldn’t they be singing about the price of oil, instead of the lack of Les Savy Fav on the airwaves?

Well, no, they can do what they like, and that’s the beauty of Backlash Cop; it’s a mesh of ideas – experiments, even – which show off a funk-rock side to Jetplane previously unexplored, interwoven with a handful of rock numbers more like the band of old, and once you get over the initial shock of the new approach you’ll realise that not a lot has changed, it’s just been rewired. Despite any light-hearted moments, there’s just as much passion here as on previous efforts, it’s just focussed more on influential figures; on Chuck Berry, Miles Davis, Dizzy Gillespie’s presidential campaign of ’64 and Sam Cooke amongst others.

Even the music hasn’t changed that much from its rock beginnings; the differences are all quite subtle. Ferris’ vocal tone remains the same as ever, walking the line in places between rapping and talking and in others singing over guitar music led either by drop-D hard-rock riffs and in others by something a little more laid-back, but this time round there are funk breakdowns here and there, a few guitar effects to back this feel up, some additional cowbell and a collection of vocal woahs and yeahs as opposed to the yells we’re used to.

These small changes don’t seem like much, but execute them all at once and it can make Backlash Cop seem a lot to take in, and it’s not helped by the album in general being a real slowburner - when it finally clicks, though, it hits home hard. When you become accustomed to the nature of the lyrics and the songs themselves take over, Backlash Cop unveils itself as a magnificent piece of work, though not everything that it attempts to pull off works: ‘Us And The Ringside Stars’ is a somewhat out-of-place spoken-word piece on the four biggest middleweight boxers of the eighties accompanied on occasion by some filtered drums, and the title track still doesn’t sit too comfortably amongst the rest of the tracks, even after repeated listens.

It is these points, along with a couple of other niggles (so small they’re not even worth going into here), that prevent me from presenting this album with a perfect rating, but Backlash Cop remains brave, outspoken and willing to try something new – one of those albums where your favourite track will change week upon week, and eight of the fourteen tracks are good in different ways, from the pair of lead riffs playing off each other in ‘Hendrix Sur La Lune’ and the gentle feel to closing track ‘Song For Sonia Sanchez’, to the furious guitar-and-vocals combo of ‘Climbing Up The Face of Miles Davis’.

By its very nature, it’ll split both the fanbase and the casual listener alike, but stick it out and you’ll discover just how impressive Backlash Cop actually is.