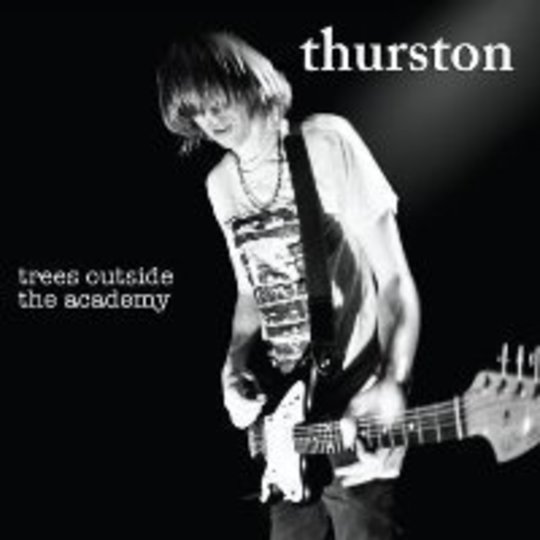 For over a decade Thurston Moore’s solo ventures have provided a means to indulge and detail his deepest noise tendencies. Whether the spiralling improvisation of Three Incredible Ideas or the directionless avant-garde of Lost To The City, there has been little that resembled the Sonic Youth spill-over that Moore’s 1995-released Psychic Hearts provided. But whilst Trees Outside The Academy is an explicit return to the realms of traditional song writing structures, this is a barren call. Rather than harking back to the glut of inspiration that came between Experimental Jet Set... and Washing Machine, Moore has never sounded so openly emancipated from the confines of the New York noiseniks.

Loitering between a state of elation and deflation, Moore's stoic delivery is ridden with an agitated hesitancy. With transitional contemplations flooding the brain, the music befits this condition. 'Frozen Gtr' opens with an industrial wail as dead waves of noise sit on the cusp of breaking in, a contented cist consistently threatening to eat away and overawe it all. The peculiar psychopathic smirk on 'Fri/End'’s chin-up Americana ("O’ how I love the smell of your charred remains / nothing better than to meet you sweetheart in severed chains") is scythed down by distortion, whilst poignant instrumental 'American Coffin' struggles to pick itself from its scar-scattered knees, with any uplifting sentiment cloaked by a skewed unease.

Turning its head away from any no-wave groundings, Trees Outside… comes to resemble certain recent releases from Moore's imprint Ecstatic Peace - from the aching detail of Wooden Wand through to Tall Firs’ off-kilter fragility. Though Moore is constantly at the forefront the contributors are decisive, whether the subtle orchestral undertone that MV&EE's Samara Lubelski's provides throughout or noise-mongerer Leslie Keffer's fleeting industrial scrawl on 'Off Work'. It generates the cutting folk-noise mismatch that Jackie-O Motherfucker mastered. But, for all the recent noiseities, other than 'Free Noise Among Friends' Moore has fundamentally distanced the doses of drone in favour of a more traditional guise. Charalambides' Christina Carter's bawling vocal contribution on 'Honest James' clashes with Moore's sullen delivery and flags up similarities with Will Oldham's rasp lapping over Dawn McCarthy on The Letting Go.

As GOWN's Andrew McGregor's sprawling solo and Steve Shelley's splintering percussion gnaw at 'Wonderful Witches', amid Moore's lost-in-lust lyrics entangling some sort of adolescent melodrama ("If you don’t shut up soon I'll have to quit the play"), it is the closest Trees Outside… comes to resembling a bona-fide Sonic Youth outing. Even when J Mascis – whose house in Amherst, Massachusetts was where the album was recorded – contributes his usual steady-handed gusto, locking horns like a silver-haired bull, he is woven into tracks - specifically 'The Shape Is In A Trance' - in a way that builds a depth to the record whilst Moore remains on a pedestal.

There is no heyday, there is no swansong, and for Moore continuation has always had more significance than reiteration. But off the back of Daydream Nation’s recent outing, retrospect seems a central theme. Whereas previous solo outings have often just provided an opportunity for Moore to further distance himself as he figured out the direction Sonic Youth were to take, Trees Outside The Academy is the sound of Moore in a moment of escapism, figuring out where he_ is going. _Psychic Hearts closed with ‘Elegy For All The Dead Rock Stars’ - a twenty minute slowly-churning instrumental that descended into a white noise assault only to come calmly back out. Curtains close on Trees Outside... with 'Thurston@13' - an archive recording of a teenage Moore, petulant and self-involved, stating "what you have heard is me wasting time again asking myself deep inside why the fuck am I doing this".

It caps it all off to be as blunt, open and insightful as you would expect from someone you're now on first name terms with.