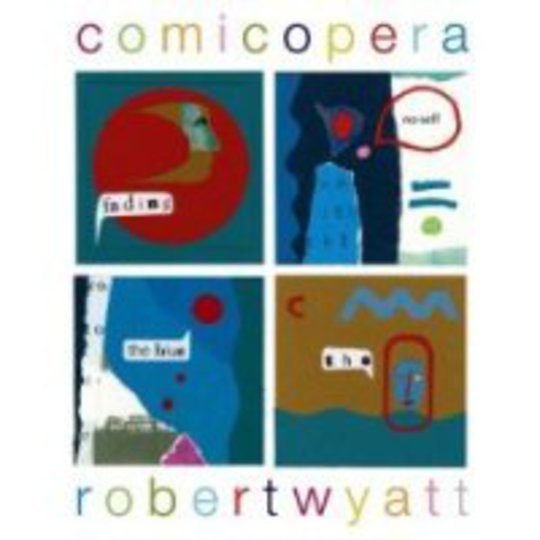 As a musician enjoying remarkable fullness of expression in his maturity, Robert Wyatt is that rarest of breeds in rock. Since his stint as drummer in legendary prog-rockers The Soft Machine during the late ‘60s, he has gone on to plough a furrow as one of the more interesting figures in the popular canon, creating an inconsistent body of work informed by his enduring love of jazz, and which seems only to have gained momentum in recent years, with Shleep and 2003’s Mercury-nominated Cuckooland widely regarded as among his best work.

Dauntingly enough, his latest opus comes divided neatly into three ‘acts’ and is titled Comicopera, although, as Wyatt has been at pains to suggest in the run-up to its release, that’s ‘comic’ as in ‘concerned with human foibles’ as opposed to ‘side-splittingly hilarious’. It is also loosely speaking a political record – albeit one examined from the perspective of human interaction – which has at its heart a devastating one-two that laments the vicarious nature of modern warfare ('A Beautiful War') before drilling home its horrific consequences as a bombed-out civilian declares "you’ve planted all your everlasting hatred in my heart" ('Out Of The Blue'). After that the remainder of the album is sung in Spanish and Italian, as Wyatt sought to register his disgust with Anglo-American culture.

So far, so heavy. But Comicopera isn’t entirely a bum trip. If you had to boil all of Wyatt’s charms as an artist down to one point, it would surely be that voice: capable of lending warmth to the bleakest of sentiments, his frail tenor conveys perfectly the world-weary humanism at the heart of his vision, and it continues to shine here. Opener 'Stay Tuned' in particular reinforces Wyatt’s status as a peerless interpreter of songs, its snaking, lounge jazz textures redolent of fellow late-bloomer Tom Waits' sublime 'Alice'. Originally penned by Norwegian singer-songwriter Anja Garbarek, it’s a chilly indictment of moral servitude in western democracy swathed in television static: "Stay tuned, there is more to come / stay tuned / oh don’t go searching, I’ll get back to you".

In many ways Wyatt is ideally suited as a chronicler of contemporary disconnectedness, and not just because of his noted political affiliations (he is a member of the British Communist Party). Simon Reynolds once noted the 'disassociated drift' at the core of his 1974 masterpiece Rock Bottom, alluding to the lapses into childlike word association and purgatorial free-jazz inflections Wyatt used to evoke a dreamlike sense of agitation in his music.

On Comicopera Wyatt uses similar techniques to describe a chaos of lines linking the personal and the political. While the same cycles of violence being perpetuated in the Middle East continue to force diplomacy off the political agenda, at home difference is something to be tolerated, maybe even cherished, as on the lovely male/female duet 'Just As You Are', in which the female protagonist either resolves or concedes that she’s "never going to change a thing" about her partner’s flaws, depending on your point of view.

Arrangements can appear airy and contented one minute, punctuated by reedy sax and double bass, and through imperceptible shifts the next they become suffocating, suffused with the terror of the infinite. Consider the following head-scratching quote in a recent interview with Plan B_ magazine: "Once I start making noise it’s a bit like jumping into water and sometimes I’m in a pond, which I would call a pop song, and sometimes I think, 'Oh fucking hell, this isn’t a pond, this is the ocean'." It’s as if one part of Wyatt wants to be autonomous, contained, describable in three-minute pop songs, and the other acknowledges the presence of the infinite pressing up against arbitrary demarcations.

Even a lyric as ostensibly daft as 'Be Serious', in which Wyatt claims he envies Christians and Muslims their capacity to_ "be so sure", there is the germ of a more serious idea; namely, the sense of identity that religious dogma must bring, which Wyatt as a non-believer lacks: _"How can I express myself when there’s no self to express?".

There are few who could delve into such weighty issues without succumbing to empty rhetoric, but it's testament to Wyatt's unpretentious approach that he pulls off the trick while retaining a lightness of touch that makes Comicopera such a consistent pleasure to listen to. From the steel drum and sax instrumental of 'On The Town Square', the Coltrane-meets-Bacharach sketch of 'Anachronist' and the thrilling Cuban jazz of 'Hasta Siempre Comandante', the record's embrace of the complex never threatens to overwhelm its affable humanity, and it’s these qualities that continue to make Wyatt a compelling creative force well into the autumn of his illustrious career.