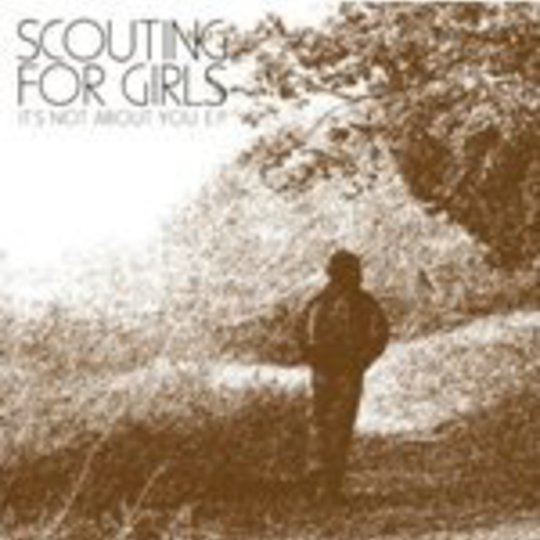 To apparent flooding demand, London power trio Scouting for Girls release their debut ‘It’s Not About You’ EP, a chaste trilogy of musical coming-of-age tales of love and loss. Full of piano-led pop flights of accessible melodies and snug harmonies, Scouting for Girls offer charismatically huggable, easy on the ear sunny-sides, without a guitar! With a wrinkly, unconvinced grimace, you’re probably thinking that the ‘no-guitar’ slogan is a weak selling point because, to this day, we consistently fail to legitimatize the existence of ‘bands’ like Keane. And I don’t blame you.

It’s a bit of a mystery, really, as the piano-bass-drums construct that is Scouting for Girls sounds a whole lot like piano-guitar-drums, but the details mean little as the lot explore fundamental themes of friendly nostalgia in the meekest, mildest way. Title track ‘It’s Not About You’ is a no-fuss, but really fussy anyway, take on the stress of a relationship gone monotonous, while ‘Keep on Walking’ is a peek into the persistence of a working band pining for their big break. The three get a little camp during final track ‘Mountains of Navaho’, with a quirky layering of dippy keyboard on top of some ragtime piano amid references to He-Man and She-Ra; oh my, it’s all so magical.

It’s a bit too after-school-special, sounding a little desperate to please. But that’s something that the band openly celebrates, so in that case it’s pretty harmless. Their plain but welcomingly escapist ways begin with their punned-pen name, which comes from the title of an actual, practically-century-old instructional handbook Scouting for Boys, a crash-course in ‘good citizenship’. They’ve been known to take this concept to shameless heights whilst building their own cult of fans, who they crown ‘Wolf Cubs’ and shower with free members-only-like gifts such as badges, a handbook, and reduced entry to gigs. If that’s true, I just might become a fan for the sake of the cool membership card.