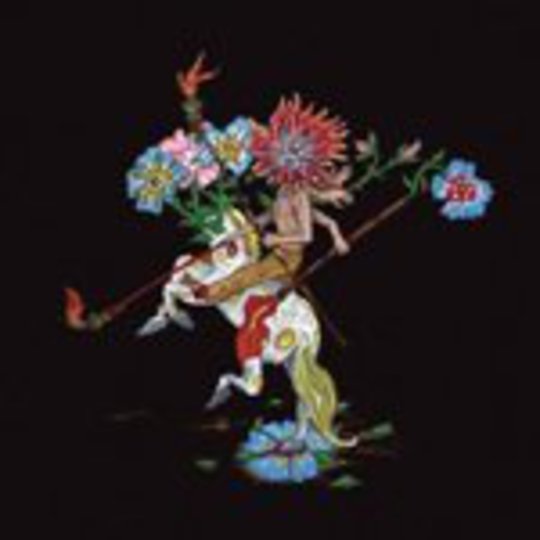 “I’m killing myself, but it’s not suicide.” You have to worry about Kevin Barnes. He’s never sounded so monumentally depressed as he did on Of Montreal’s very fine Hissing Fauna, You Are The Destroyer LP, spewing forth naked confessionals even while his band is laying down the kind of dementedly upbeat funky grooves and twisted electronic Beatle-isms on which their reputation was founded.

The songs on their latest EP were recorded alongside those committed to tape for that album, so don’t expect Barnes’ mood to go shifting back to good any time in the near future – if anything, some of the sentiments expressed on Icons, Abstract Thee are even bleaker than those found on Hissing Fauna: “I am a flaw, I’m a mistake, I’m faulty, I always break”.

It’s already been remarked that Barnes’ self-pitying lyrics verge on the embarrassing, but here they make a perfect kind of sense: this isn’t poetry or high art, it’s Barnes’ attempt to come to terms with a domestic situation crumbling under the weight of encroaching mental illness. By definition that ain’t going to be pretty, but it does throw up the occasional heart-rending line, like his admission to an estranged partner in ‘Voltaic Crusher/Undrum To Muted Da’: “You gave me your hand, I gave you a fist / Please don’t lose any sleep over me, I hardly exist”.

“It’s a mad free fucking world, you can go where you want/leave me,don’t leave me alone” he pleads paradoxically on ’Derailments In A Place Of Our Own’, over a catatonic, Syd Barrett-esque acoustic dirge, not quite able to persuade himself that he's beyond caring.

‘Miss Blonde Your Papa Is Failing’ stands out as a moment of poignancy among the pervading atmosphere of paranoia and suffocating psychedelia. A heartfelt apology to a daughter caught up in the disintegration of her parents’ relationship, it’s a tender, McCartney-esque ballad that could have been lifted from Rubber Soul or Revolver: “Sweet friend, was I born to give you a name and then be erased oh because I couldn’t keep it together?”.

The only bum (as opposed to bummed-out) note comes with ten-minute closer ‘No Conclusion’, which indulges Barnes’ worst tendencies as a songwriter, flitting irritatingly between melodies as the music attempts to keep pace with Barnes’ racing thoughts, before finally finding solace in a stately orchestral outro.

In the hands of a less prolific and committed band, Icons, Abstract Thee would have been a cobbled-together collection of off-cuts of only peripheral interest to diehard fans; as it is, the EP actually stands up pretty well as an entertaining - if exhausting - companion piece to Hissing Fauna…. All that remains is to wish Kevin Barnes a speedy recovery. So, at the risk of sounding a little glib: c'mon, Kev, cheer the fuck up!