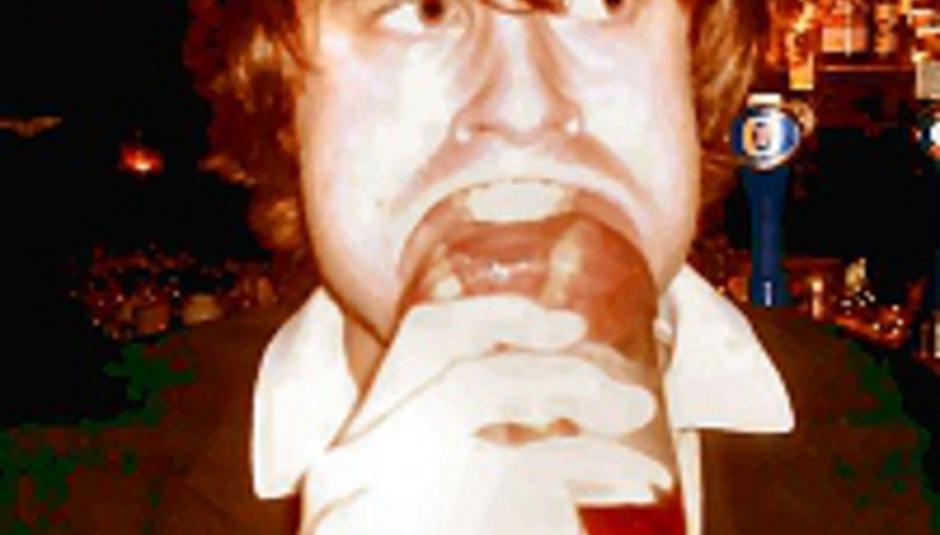 Oh, boys and girls of DiS, do we have a jolly green giant of a Friday night up our baggy sleeves for you. After much pulling and pushing, groping and bribing, we've landed at this: DiS @ The Barfly, March Edition.

It's not been easy - my hair's gone an unflattering grey and Colin's been forced to brush his teeth with next door's terrier (as well as turning to eating glass, as pictured) - but we've sold our soles (yeah, the ones on our shoes) to bring you...

Popular Workshop (MySpace)
Lord lord lordy, does this London-based trio of rockers ever, um, rock. They formed after advertising on DiS, so it's our fugging pleasure to have them at the Barfly. They've a single out, perhaps right now, through Studio Penguin Records. It might be called 'All About Vicky' - as heard in Topshop! - and we might have played it on DiS Radio 9. Yeah, maybe we did. It has a b-side called 'Fuck Shit Up', which is pretty much what we do about the office whenever Colin puts it on. It's for this reason alone that all door handles and right-angle edges are now covered in jelly babies, cellotaped into place. I ate all the green ones, though. Sweeeeeet...

3hostwomexicansandatinofspanners (MySpace, Official)
3hos, how I love thee, let me count the ways: one one thousand, two one thousand, three one thousand... Brought to DiS's attention by the twin towers of indie-rock knowledge, Noisestar and Silver Rocket, 3hos are four Bristol men full of fiery punk-rockin' rage from another planet of sound. They'll thrash 'til you're spent, sweat on the floor and your gut in your mouth. This is what I wrote about their debut album, Pegasus Bridge, out now on Noisestar: "Their might rivals continent-conquering armies... if you can't dance to a song here, you're quite obviously dead". They are, quite seriously, the greatest British punk band of their ilk since Mclusky. You can read the whole review here.

And what's more! We've quite excellent DJ action from the superb Silver Rocket and White Heat, as well as the usual DiS-plays-Queen-and-AC/DC-until-people-dance-or-leave tomfoolery from Colin and, um, myself. YEAH. So that's...

Where? The Barfly, Chalk Farm Road, Camden, Norf Laahndaahn
When? Friday March 24th, 10.30pm until 3.00 in the am.
How much? Corrr, act now and it's just a fiver in advance. Click here for advance tickets!

You can add this GREAT event to your Gig Calendar right here, so DO IT, in the words of Arnie.