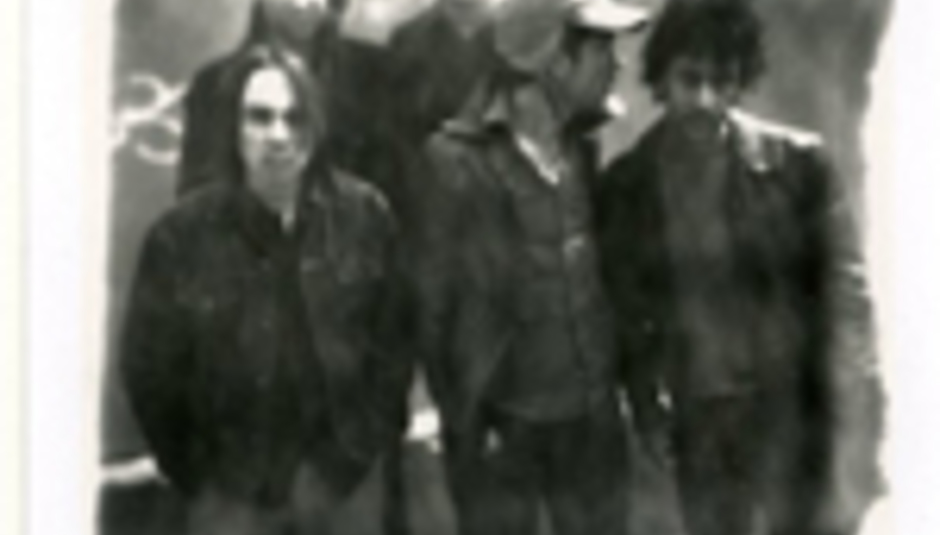 Two years ago, The Crimea’s single, ‘Baby Boom’ made number seven in John Peel’s Festive Fifty, out-placing the likes of the White Stripes and Yeah Yeah Yeah’s. In October, ‘Tragedy Rocks’, their first album, was finally released. So what on earth have they been doing with themselves all this time?

Touring. Endlessly. Or, as singer Davey Macmanus puts it, “mincing about in America on cub scouts camp.” He and drummer Owen Hopkin have served a long apprenticeship together, gaining a certain amount of notoriety as The Crocketts before that band was dropped and imploded in the early 2000s. This time, they’re “trying to do it right for once, instead of just continually fucking everything up.” A noble ambition. “Owen and I were doing crap jobs and living in shit places and had no education. The only thing we could do was music. We juts wanted to think about it for a while and do something that might give us a real chance.”

Despite positive responses to their first demos and support slots with such high profile fans as Kings Of Leon, the band were largely ignored by record companies in the UK. So they scooped together the last of their coppers and decamped to America, just to see if it was really the land of opportunity that people claim. Everything was staked on an appearance at the 2004 South By Southwest festival in Austin, Texas.

Everything went wrong. Guitarist Andy Norton shudders as he recalls the disaster – all the gear broke down, the keyboards would only play peculiar sci-fi synth noises and then Davey tripped over and fell flat on his arse. “We thought we’d blown it,” he admits, lost for a second in the embarrassed horror. But like something out of that film where Chesney Hawkes becomes a pop star, their post gig gloom was shattered by ringing telephones. They had gone down well and salvation was theirs in the form of a major label deal, with only minor conditions – Davey getting his teeth fixed. They were able to draw the line at full styling: “Five grown men don’t like talking about their clothes. It’s like talking about a relationship or something.”

Reticence in talking about relationships? From a man who is prepared to sing, “sometimes I think you could be more than just a punch bag with lipstick on.” But offstage, Davey Macmanus’ shaking intensity and serrated yelps are replaced by a quiet thoughtfulness. Though he remains as hard to pin down as the meandering black humour of his lyrics. So are these sordid vignettes from personal experience? “I’m a total liar, I try not to write from a personal point of view. I try to write stuff that anyone can understand. Though that sounds quite vain, like Noel Gallagher with, ‘Let There Be Love’, playing God. We’re trying to play the parrot on God’s shoulder going, ‘Oi! You’re shit!’ We’re playing the food in God’s beard.”

We may recognise from this a graduate of the music industry’s school of hard knocks. Mr Macmanus is not a man who’s bursting to give himself away. He wants his dark tales of drunken rows and bleak disappointments to stand for themselves and is not about to start explaining them. But he rejects the idea that the low times that inspired the album have made him cynical. “It’s not cynicism,” he counters, “it’s reality, like the news or something. It does say life’s absolute shit and everyone’s a cunt, but have some fun along the way. Well it mentions that bit once. One percent of the lyrical content.” Stop for a moment and try to imagine these words coming out of Jon Snow’s mouth at the beginning of the Channel 4 News.

Such defensiveness may also be explained by the band’s return to Britain. They’re not ashamed of their ambition, “we’re definitely trying to realise the old dream. Every boy’s dream – to be in The Darkness,” though even that gets undercut with a joke. But he has clearly been apprehensive about the reception they would get on coming home. “I wasn’t sure what people would think of it in England. In America people love a bit of emotion. It draws them in. But in this country people are a bit more beard scratchy, or cynical.” Perhaps I shouldn’t have brought that word up. “But so far no one’s been cynical too badly – as in, ‘This is a lot of embarrassing emotional shit.’” In fact the reaction has been far better than that, packing venues on their first headline tour and getting positive reviews for the album.

His restless mind is already on the second album though. Not such a surprise when it’s taken so long for this one to come out. With Butch Vig being mentioned as a possible producer and a stack of new songs ready to work on, they even tried setting up a studio on the tour van to get demos recorded. “It’s just imperative that the second album shits on the first one.” After all those years of false starts you can’t blame their eagerness. This is a man whose drive seems to be one part work ethic and one part self-flagellation. As he says about playing gigs, “you feel like a right gaylord if you haven’t done your best. You have to feel like you’ve tried really hard.” Here I would love to waffle on about steely determination, but am unfortunately still laughing about the use of the expression ‘gaylord’.

Their pathological fear of scenes (“I don’t mind new bands, I just don’t like fashions, because I’ve seen so many go by.”) might prove a hindrance in competing with bands who are younger, better dressed and have sillier hair than them. But this is a band who are “not ashamed of a bit of pop”, and mixed with Macmanus’ twisted version of reality, maybe The Crimea can convert the world. Finally.