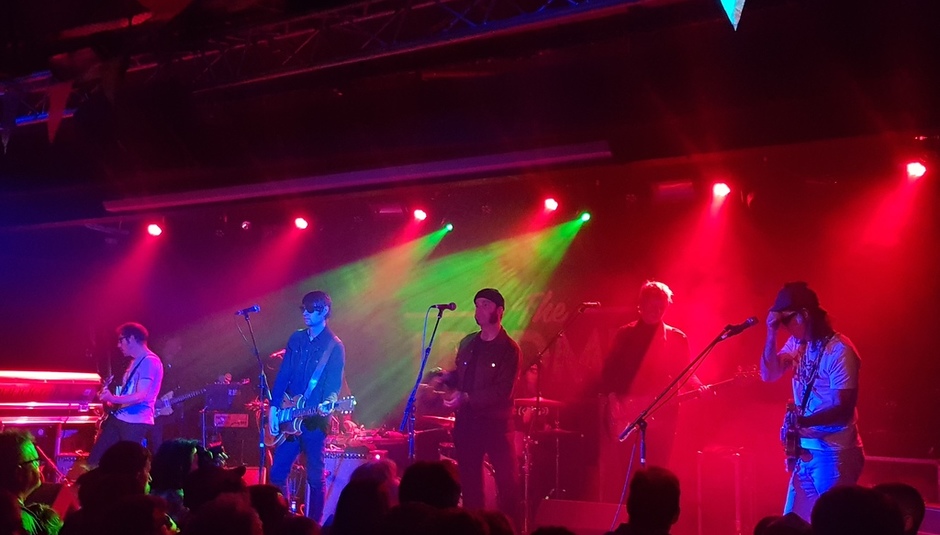 As one of the most prolific bands of the past twenty-five years, it's probably fair to say life's never dull in The Brian Jonestown Massacre. Add the unabated quality control applied to every single one of their releases and it would be hard to find anyone more consistent over the same time period too. So it shouldn't come as any surprise that all ten dates of their UK tour sold out, almost every one in advance.

Led by the inimitable Anton Newcombe, the band's ever-evolving line-up matches their creator's similarly evolutionary quest to push things further with every subsequent release. It's this unquenchable craving that's seen Newcombe outlast countless scenes and genres, many of which were invented by others as a result of his wares. What this also results in is a fresh approach to almost every recording and performance that goes with it. Observers will no doubt point to their favourite BJM line up in the same way many do with The Fall, but ultimately it's the creativity of each band's mainstay that's ensured their relevance whatever the decade.

So while several unfamiliar faces take the stage this evening their delivery is simply breathtaking. Alongside Newcombe and long-serving members Joel Gion and Ricky Maymi there's Berlin-based drummer Sara Neidorf, whose other project Mellowdeath are well worth checking out, while Icelandic trio Hákon Adalsteinsson (best known for his work in The Third Sound), Hallberg Hallbergsson, and Ryan Van Kriedt (formerly with Dead Skeletons but again, no stranger to the BJM having played live with them for some time now) filling in on guitar, bass and keys respectively. Together for the next two and a bit hours, they concoct an incendiary mix taking in a selection of Newcombe's best work from his unerring back catalogue.

Beforehand, Manchester-based five-piece URF more than whet appetites with their elegant set that owes as much to Jefferson Airplane and Fleetwood Mac as it does anything from the present. 'Athena' stands out from the rest of their relatively short performance, Abbi Purcell's soaring vocals elevating it's serene ambience to a higher plane altogether. A million miles away from your average, run of the mill haircut, vintage threads, and Chelsea boots ensemble that's been a little too omnipresent among the new breed of psych rockers recently, URF are clearly more focused on songs rather than image which is why we predict you'll be hearing a lot more of them in the months ahead.

Back to the main event, it's been a rewarding tour for the headliners by all accounts so far. Reports have been overwhelmingly positive from every show, not least regarding the contribution of those new additions to the group. Perhaps most importantly, the newer material - of which there's a near 50/50 split - has been well received throughout this sojourn, and after opener 'We Never Had A Chance' kickstarts the show into life, a reworked 'Vad Hände Med Dem' from 2014's Revelation has its sights firmly fixed on the stars.

Resplendent in a deerstalker cap and white t-shirt bearing the slogan "EAT SHIT", Newcombe is forever the focal point even in his now customary position at the far right of the stage. Short gaps appear between almost every song, mostly to ensure guitars are tuned and everyone knows what they're doing. Yet the flow never feels interrupted, even when the odd audience member sees it as an opportunity to scream the occasional unnecessary obscenity at the stage (and on more than one occasion finding themselves put in their place with a casual "Shut the fuck up!" riposte).

'Hold That Thought' and 'Who Dreams Of Cats?' from this year's excellent Something Else are dispatched early in the set, both sounding sublime in this setting, while another new song, 'Forgotten Graves', makes those present yearn for its impending release in a few weeks time. 'What Can I Say', also officially unreleased at the moment, and recent b-side 'Drained' stand up impeccably alongside the more familiar material aired, while closer 'A Word' sees two members of the BJM road crew join forces with the band for a dizzying finale that eventually ends with Newcombe on drums and Van Kriedt firing all kinds of space-age noises out of his keyboard.

Elsewhere, 'That Girl Suicide' from debut album Methodrone reminds us why we all fell in love with this band in the first place while 'Anemone' becomes a communal singalong, the whole room joining forces to sing it back at the stage word for word. 'Nevertheless' and 'Sailor' off 2001's Bravery, Repetition and Noise also sound magnificent in this setting, which is testament to the input of the newer members as it is its creator. A welcome run out for the rarely played (before this tour) 'Yeah-Yeah' off the vastly underrated My Bloody Underground moves the show succinctly towards the two hours mark while 'Who?' and 'When Jokers Attack' once more inspire vocal audience participation.

Whoever said Monday nights were for staying home and watching television was wrong, but then it's not every day of the week The Brian Jonestown Massacre happen to be in town. When they're on such glorious form as this, there's no one better.