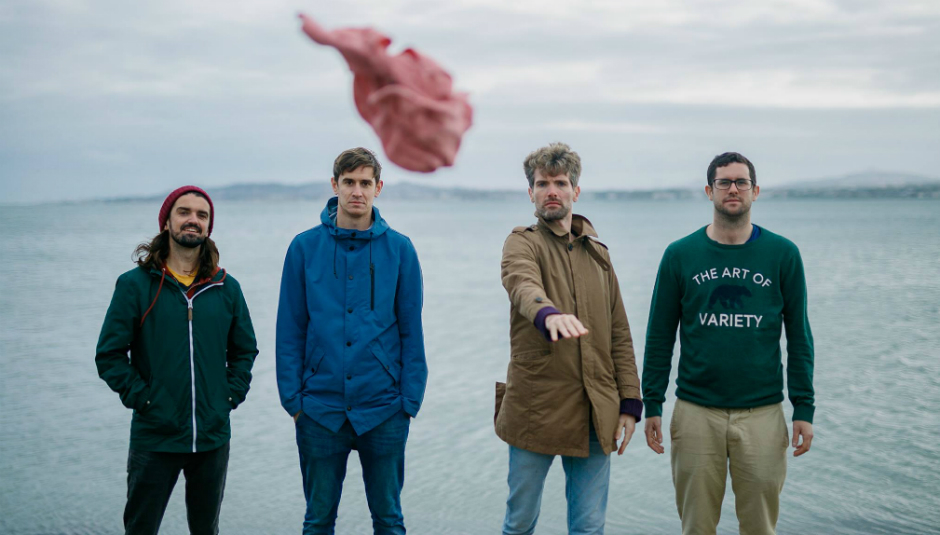 Five years on from the release of their debut LP, Nothing Good Gets Away, Dublin indie rock quartet Bouts resurfaced back in May with the triumphant ‘Face Up’. The lead single from the band’s forthcoming second full-length, Flow, it proved an earworming masterstroke from the re-emerging four-piece.

Having formed back in 2011 and shared stages with Cloud Nothings, Yuck and Johnny Marr among others, the band – who are currently scattered across London, Amsterdam and Dublin – are more potent and unapologetically unabashed than ever.

New single ‘Love’s Lost Landings (Pt. 1)’ is a perfect case in point. Accompanied with visuals from French photographer Gwenaëlle Trannoy, it’s an equal parts slick and starry-eyed burst of first-rate indie rock centering around frontman Barry Bracken’s insistent refrain: “Be good to yourself / Be good to me”.

Ahead of a busy few months, and the release of Flow, we catch up with the band to discuss early beginnings, the pros of being based in different cities, the current health of indie rock and more.

Barry Bracken: Daniel (Flynn – Drums) and I were together more than a year doing a kind of White Stripes two-guys-in-a room thing. Guitars and drums and literally no daylight. Then in mid-to-late 2011, we started to bring in some people to see if what we were doing could be expanded. And so began Bouts as it exists today.

Niall Jackson: In fact, within ten days of joining back in September 2011, I had written four basslines and was in a studio recording our debut EP, which was released in 2011.

You release your second album, Flow, in January. How did you approach this differently to your debut, Nothing Good Gets Away?

NJ: We approached it completely differently. The first album was written and recorded in painstaking detail over the course of 18 months in a makeshift studio/rehearsal space under a railway arch on the Northside of Dublin. Songs were written, deconstructed, and built back up with most vocal melody a very late addition.

BB: There was definitely a sense of over-writing on the first album which, in hindsight, is quite evident. In the 5 years since, the way we approach song-writing has changed. With Flow we did it in intense bursts from November 2016. London first, then a cottage in Connemara, a youth centre in Dublin, and finally back to our first ever rehearsal space in Dublin where Daniel and I spent a lot of time!

NJ: In between a WhatsApp group was where we fleshed out ideas and grievances, so these weekends were almost entirely positive, and have really made us better friends as well as musicians. Everything feels like it was written together. Very few disagreements and lots of “be the solution” attitude towards putting our best feet forward. 18 tracks became the 9 on our record in a really natural and pleasant way.

You’re a Dublin band but you’re all based around Europe. This will obviously have some setbacks, but what are the positives to it, if any?

NJ: The positives are two-fold. Firstly, when we meet up it's really a matter of digging in, less distractions and more practice. Secondly, we are all taking in different scenes in different cities and bringing them back to each other in a very old-fashioned way. Using the influences of our respective environments for the greater good.

BB: It also gives us a sense of perspective. We enjoy being together. We enjoy being creative. We don’t get too lost in ourselves like we used to and we’re really very focused now when in the room. Rehearsing for lives shows and actually playing live is harder but that’s part of the fun…

‘Face Up’ was a killer first single. Do you think it helps sum up the overarching feeling or sentiment of the album?

BB: That song sort of grounded and catapulted us in this process. It became the fulcrum around which the other songs were built and pointed the way forward in terms of style.

NJ: Definitely, it is very much more outward looking and positive than our previous work. Barry's lyrics are slightly less wrapped up in metaphor and at some points pure heart-on-sleeve, which matches the 90s style emo music (before it was a bad word) we make so much better. The album is called Flow for a myriad of reasons, not least because it all just looks in the same direction this time.

Your music is ridiculously earworming. Tell us about the songwriting process that went into the making of this album.

BB: One of the unexpected positives about not being together much as a group means that when we do it’s kind of an adventure. Getting everything together and locking ourselves away in a different location is really just an excuse for a “working holiday.” We play and see what comes out and develop parts and just keep repeating them until we can get a handle or a hook out of it. By now we have an ear for what works and what doesn’t. We don’t waste much time indulging. We experiment with keys, guitars or vocal melodies and see what fits. Usually though, there’s an early motif that guides everything.

NJ: Musically speaking it was a 'less is more' attitude, so basslines could be less busy, guitars only played where needed, and Colin often veering more towards keys and synth parts over too much guitar. Drums very much dictated most tracks, everything else sits in between. It is certainly Dan's (drummer) best work, he would cite Interpol and The National as big influences, and I think you can hear that in his drumming on this one. Once Dan was happy with a drum part it was very easy to find our respective places within.

Re-emerging after five years is a big thing for any band, but you strike me as particularly determined to make the most of this new chapter. Does this mean everything?

NJ: Well, it has always meant everything, but the difference now is we all have our own lives going on too so this one is very much for us, going back to why we did it in the first place. Yes, we're five years older and have lost that “new car smell,” but we are also better musicians, better friends and write better songs. It will be great if people acknowledge that but it won't change how we feel about these tracks, whereas it may have crushed us a little before.

‘Love's Lost Landing Pt. 1’ is the second single from the release. Why did you choose it and tell us about working with Gwenaëlle Trannoy on the video.

BB: It’s a power-pop kind of tune which we allowed ourselves just run with. It’s got a tension and release quality and a rolling momentum and build in the outro. Pretty quickly we realised it was always going to be one of the lead-off songs. We want to work with interesting collaborators for our videos. We have a kind of 50/50 rule; half the time we’ll do it ourselves, the other half we’ll give someone completely free rein to interpret our songs. We like to not make the most obvious choice, but someone who’s got a track record in a visual field and is already working with young Irish musicians. Gwen’s got this really unusual visual eye in her photography – offbeat and stylized – and she did a great video for an Irish band called Whenyoung (‘Pretty Pure’). So we reached out!

You list the likes of Ash, Dinosaur Jr., Pavement, Pixies, Yuck, Yo La Tengo and Weezer as key influences. But which more new-fangled acts are you currently all digging?

NJ: We realised that it is 90% female-led acts that we’re all (independent of each other) listening to these days. Mitski, Snail Mail, Soccer Mommy, Lucy Dacus, Phoebe Bridgers, Pillow Queens. There are plenty of interesting male voices too, IDLES and Ireland's own Silverbacks are awesome, but it seems the ladies just have more important things to say right now, and maybe it's time we just shut up and listen.

BB: Yeah we do this thing where we’re almost hive-mind-esque in our listening habits. Lots of overlap at different times.

I’ve heard some crude rumours that indie rock was dead. Is there any basis in those rumours, and how do you feel you're helping to keep the dream alive?

BB: We’ve never really been in fashion so whether it’s dead or alive wouldn’t make much difference to us!

NJ: Just another journalistic trope that will forever be recycled in an effort to try and box genres and tastes off to a certain period of time. It has been great since it started and will always be great in its own way. Sure, styles will change, and hopefully different people will get a chance to be heard, but indie-rock is here to stay.

Finally, looking forward to the end of the year, the release of Flow in January and beyond, where would you like Bouts to “be” this time next year?

BB: Hopefully the album reaches a few more ears, in a few more places and we get some pleasantly surprising shouts along the way. Gigs, kudos, or actual shouting because someone just really digs our music that much.

NJ: To be heard, to be given a fair roll of the dice, and to just keep enjoying ourselves. Plus, we’re available for all your indie needs.

For more information about Bouts, please visit their Bandcamp.