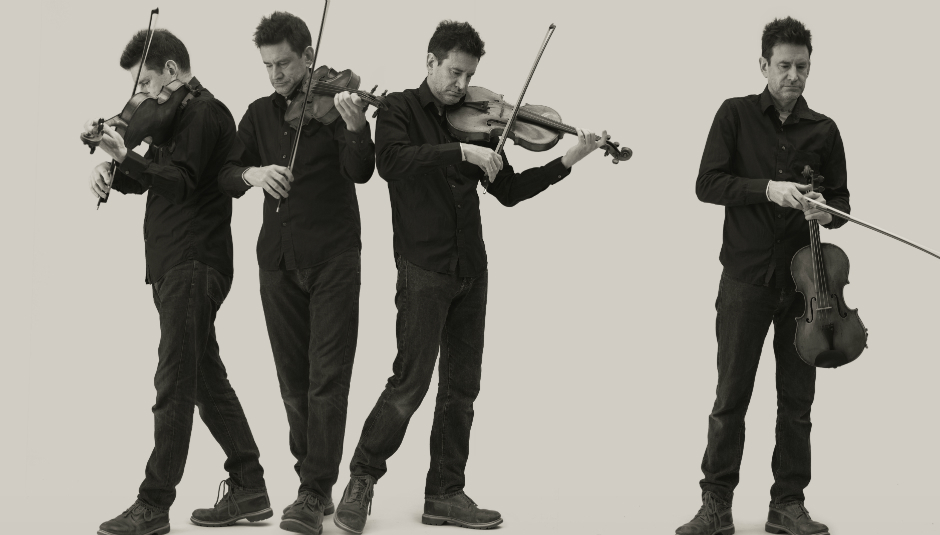 John Metcalfe is a man of many talents, and the British-based composer, arranger, and violinist has long been at the vanguard of pushing notions of "classical" and "pop" music to their extremes. As a member of post-punk icons The Durutti Column, Metcalfe was instrumental in persuading Tony Wilson to set up Factory Classical, an offshoot of the famous Factory Records, as well as writing for and collaborating with a number of other great artists such as Peter Gabriel, Morrissey, The Pretenders, and Coldplay.

Having released several solo albums in the 2000's, his 2015 record Appearance Of Colour - a more traditional set of songs - marked a new chapter in his career, and further cemented his reputation of one of the UK's best, most consistently brilliant artists. His new album Absence is no different, a stunning rumination on death and what it leaves behind, and how people try to make sense of loss. Nothing lasts forever, and Metcalfe confronts this and the cycle of nature with warmth and a loving perspective.

We sat down with Metcalfe to talk about the narrative of the record, his approach to working more as a band, and the sadness that we all carry with us. We're also delighted to include the video premiere for 'Solitude', the second single taken from Absence, a beautiful visual directed by Tom Andrew And Sam Davis, which you can watch below.

John Metcalfe: It’s less to do with me and more to do with Rosie [Doonan], because she’d started doing some gigs with the band. I should just call the record the Rosie Doonan show really; sonically it’s about her because I just love her voice. She used to be in a rock-influenced indie band called Cry Baby, and she’s actually a folk singer, she comes from a musical family called The Mighty Doonans. They do lots of folk gigs and so she’s been raised in that tradition and she’s done albums with a singer called Ben Murray. It’s a beautiful sound, and in some ways it’s all about that sound. Lyrically these tunes are a lot more song-like than anything I’ve ever done. I’m a bit scared by it, to be honest; I’m not a wordsmith, I’m not a poet, I’m not a lyricist. There are plenty of people who write beautifully, so I tried to keep the words a little more indistinct to make it more open to the listener.

Did you write them all yourself or did Rosie help out?

‘Boats And Crosses’ are her lyrics, but the rest are mine. ‘Above The Waves Of Crystal Water’ was co-written with Rosie. My lyrics tend to be couplets of words, little guidelines and sounds to lead the listener.

I also noticed that you sing a bit on the album.

Yes, I sing on a few of them actually. I don’t know why I did it. As the tracks and music were developing, I thought they needed a vocal sound and as I got over my singing, I really started to like it! My father was an opera singer and I’m not trained, but I quite liked the sound, even though I’m not the best singer in the world. It has something that emphasizes the sentiment and emotion that I’m trying to describe.

When you’re working on a musical idea, does it become very obvious or apparent to you that it needs words or lyrics? How do you decide whether a piece stays instrumental or whether you want to add more to it?

I think if there’s a narrative before the record, I start with something like the violas, and then go from there. It’s very accumulative, never preconceived, and I’ve never done an album thinking I’m going to write a set idea. It’s not like Max Richter’s Sleep, or something where it’s very clear what the objective is – I’ve never worked like that.

So as the huge dimension that Rosie brought became OK, I knew this was going to be part of the sound world as an integrated part of the timbral element. I just added more and I realised there isn’t one track on the album which is just instrumental. So I did need the instrumentals just to let the album breathe at certain moments.

Loosely, what is the narrative?

There was a track I previously wrote called ‘Flood Tide’, and that was written after a friend's sudden suicide. Some months later I wrote some words about it and there seemed to be a tie-in with the album. I’m very reticent about attaching this to a mawkish or trite record; in the loosest way there have always been tracks about the death of my father, but this album is about the conversations we have. Perhaps with someone who is in the final stages of physical death, or what happens with the electricity as it leaves our body, the thoughts of the person who will carry on living and the person dying.

‘Above The Waves’ is a song more about memory and happier times which come as a kind of light relief from being in that situation. It’s how somebody carries on through us in the way we remember how they sounded, smelt, and the way they viewed the world. For example, I immediately forgot how my father sounded until we found some old tapes of him. Around the same time, I discovered some artwork by a Danish artist called Vilhelm Hammershøi. They’re not specifically about loneliness, and a lot of them have a very intimate but an elegiac, mysterious quality to them. I remember that thing that happens when you’re a kid and someone dies; I ran in from the garden and called for my dad, and you realise that he’s not here. I really remember that silence in the room, and all those feelings have underpinned the sounds I’ve gone for and that’s been a strong element behind what I do.

You have synesthesia, and I was reading that you see certain keys as a colour. So when you say you started off with the viola or certain sounds that you like, do you start with this element or the colour?

I think I was attempting this on the last record, Appearance Of Colour. It did inform it in some ways, but it doesn’t really appear as a main focal point. So certainly with this record, it hasn’t been a consideration.

Appearance Of Colour is quite stark, mostly post-classical and electronic, but Absence has more of a traditional structure, more of a pop element; there are a lot more “normal” songs on it. Was it a conscious decision to make something a bit more accessible?

I definitely wanted it to be more of a band record. As soon as you have a voice on something, it brings it in a bit, we then have a linguistic response to it. I wanted it to be a band record with Daisy Palmer and Ali Friend, it worked really well with all three of them and their creative inputs. Especially with the drum and bass, I was keen to include their sound world from the start, so that I could use the platform to move into other directions. The stuff I’ve done before has been very exact. Sometimes I have to come back and re-evaluate it again and again – an issue I’m sure most artists deal with.

To me it sounds a bit warmer and more joyful in comparison to the previous album.

The narrative includes my wife and I into these songs a bit, so it’s good that the warmth comes through. Certainly ‘Above The Waves’ is a bit celebratory.

Were there any literary influences, like books, texts or poets that you feel influenced this in any way?

If I tend to read, it’s history books or historical novels like A Distant Mirror by Barbara Tuchman, so I don’t tend to touch novels. But Louisa’s father is a well-known poet – John Fuller – and he writes very beautifully about death and absence. So not specifically an influence, but if there was an unspoken influence in some way then I would say it was him.

When you mention the theme of Absence, my favourite song is ‘Solitude’ because it’s a bit more melancholic but in a beautiful way, almost celebrating their presence.

Death is a reference on the record but if there is a dialogue between two people, it’s as if they are still alive, so they’re interacting with the knowledge of something unknowable. There is no catastrophe on the record – it doesn’t deal with that effect. It comes from a warm, loving perspective.

You said you felt like this was more of a band album. Did you deliberately limit the instruments used, so it would work better live?

I love doing gigs so I want the experience to be as live as possible with the stuff I write. But I’m trying to limit that. I love the haptics of playing instruments and I love playing music with other people. There are effects on it, but they’re more effects on the acoustic instruments – it’s not an electronic album.