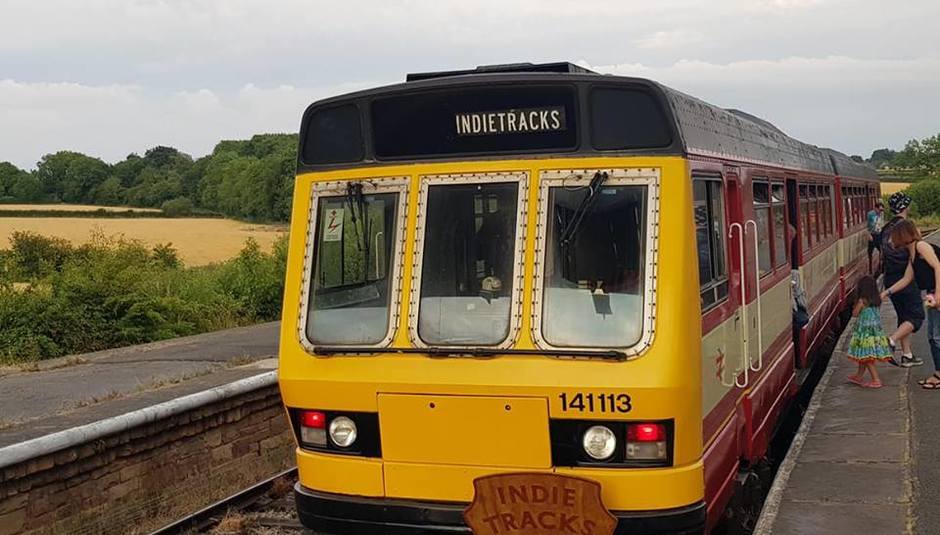 The last weekend in July has become one of the busiest on the UK festival circuit, with Kendal Calling, Standon Calling, and Y Not among those competing for the same audience. It also traditionally coincides with Indietracks, and while my internal music snob is trying its hardest not to materialise, it's difficult to imagine the same people who frequent this festival showing any inclination to tread elsewhere.

Ever since the first event back in 2007, Indietracks has continued to evolve rather than grow, choosing instead to focus on its clientele rather than profit. Indeed, it's become a gathering for friends old and new to congregate, acquaintances first made at this festival years before where each subsequent event becomes an annual catch up for many.

It's also one of the few events that not only boasts, but fully delivers a family friendly environment both at the festival itself, and on the nearby campsite, where the most rock and roll/anti-social (delete where appropriate) instance is likely to involve nothing more than an overflowing toilet or overfilled litter bin. 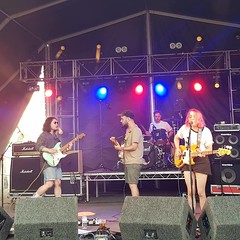 Held on the site of the Midland Railway Heritage Centre at Butterley in Derbyshire, its capacity is strictly set at just over 1000 people, which even at its busiest makes the festival a comfortable experience. Locally sourced food and drink are sold at affordable prices, and the queues for those and the amenities rarely build up at any point throughout the weekend.

All of the staff are volunteers and even when the heavens open to turn Saturday and Sunday into monsoon-like conditions, the smiles on their faces never wane. The sense of belonging and fulfillment is a joy to behold, and one that even the most seasoned of festival goers would rarely witness elsewhere on these shores.

While the music is spread across four stages, two marquees at opposite ends of the site provide workshops for both adults and children that range from hobby horse making and readings of The Gruffalo to crafting DIY record players out of cardboard boxes and Olivia Newton-John themed quizzes. It truly is among the most unique events of its kind and for that reason, stands out from the crowd when the perennial festival calendar is announced.

The line up itself also raised a few eyebrows this year, not least with the number of female and BAEM acts represented on the bill. While other festivals have to sign up to four year long pledges to get their houses in order, Indietracks has always focused on diversity both with its bookings and audience.

The first night (Friday) might only host three bands, but its an exceptionally strong bill that also brings with it one of the finest discoveries DiS has seen this year. East London outfit Worst Place play a brand of scuzzy, lo-fi pop that sits somewhere between fizzy C86 indie and socially conscious punk. Playing in the early evening sunshine on the outdoor stage to a large and attentive audience, they're a minor revelation and one that leads us to the merchandise tent shortly after their set in search of music and other assorted goodies.

Rachel Aggs' Sacred Paws also shine thanks to their afro-beat tinged post-punk that isn't a million miles away from her other bands, Trash Kit and Shopping, but also stands defiantly proud in its own right too. After their set, its left to Lancaster duo The Lovely Eggs to close the first day. Their brand of sarcasm riddled punk pop going down a storm with all and sundry. 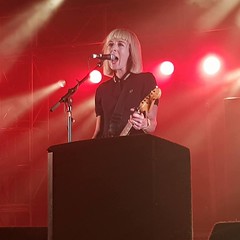 After the bands have finished, all three can be seen in the aforementioned merch tent, signing records, answering questions, or just having a casual drink and chat. There are no boundaries (or backstage areas) at Indietracks. Everyone is invited. Everyone is included. Everyone gets involved.

Day two brings with it the first sign of rain clouds the East Midlands has seen in over six weeks, and while the intermittent downpours threaten to hamper some of the sets on the outdoor stage, there are no such issues elsewhere.

Which is just as well for Derby's Mighty Kids whose electronic chamber pop wows a packed church just after lunchtime. Centered around the husband and wife duo of Shelley and Rob Newman, they make danceable indie-pop that brings to mind April Towers and a latter-day Field Mice while throwing in an excellent cover of Bananarama's 'Cruel Summer' for good measure.

London-based trio Whitelands prove another interesting discovery, their stripped down, math infused post-punk hitting the right spot on the not-too-crowded steam train that makes the three-mile journey from Swanwick Junction and back just in time to complete their twenty minutes set.

Night Flowers have come a long way since their conception in various Hull rehearsal spaces nearly five years ago. Whereas before their fizzy pop-punk occasionally bordered on the shambolic - which isn't necessarily a bad thing by the way - they've since blossomed into a well oiled, distinctively polished machine ready to fly the lo-fi nest into the big bad world of the mainstream. Playing a set mostly consisting of songs from this year's debut Wild Notion, they evoke comparisons with both Paramore and The Primitives while in singer Sophia Pettit, possess a true star in the making.

Spinning Coin, now a four-piece, also deliver an impressive set that introduces a handful of new songs alongside choice cuts from last year's vastly underrated debut Permo. However, its left to charismatic trio Dream Wife to not only scare off the rain clouds, but also dispatch forty minutes worth of polemic punk that's big on anthems ('F.U.U.' and 'Let's Make Out' proving particularly popular) and riotous in its execution.

Over on the indoor stage, Amber Arcades make the brave decision to play nine songs off forthcoming second album European Heartbreak in the first ten numbers, which is a bold move in itself considering the dramatic shift in styles from their debut. Nevertheless, the gamble pays off and those in thrall to the first record are treated to some of Fading Lines' standout moments at the finale of their set.

An event such as Indietracks was made for a band like British Sea Power who've always supported the underground while deliberately avoiding the mainstream. Unsurprisingly, one of the largest crowds in Indietracks' history assembles, and when the six-piece eventually take to the foliage-decorated stage some thirty minutes later than scheduled, pandemonium ensues. With no new material to promote since last year's Let The Dancers Inherit The Party, their greatest hits repertoire provides a fitting climax to Saturday's proceedings as the now familiar sight of dancing polar bears joins the crowd for a celebratory ending. 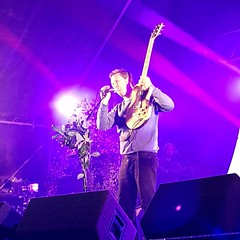 With more rain threatening to mar the final day, indie supergroup of sorts Let's Whisper provide a soothing respite on the indoor stage. The four-piece, featuring members of The Smittens, Bradley's Almanac and former Standard Fare singer Emma Kupa on bass play wistful, melancholic pop that would hold its own in any company.

London's Dream Nails are another revelation, their angry feminist punk calling out all forms of discrimination while insisting women and non-binary members of the audience come to the front and men stay at the back throughout their set. Memories of Huggy Bear and Bikini Kill's UK tour from 1993 spring to mind and in songs like 'Vagina Police' and 'Joke Choke' have gut-wrenching statements of intent to match their agenda.

Boyracer may have been around over a quarter of a century throughout their various guises but you'd hardly know it based on their fast-paced, DIY punk rock. Frontman Stewart Anderson cuts an imposing figure spitting out lyrics during a short but spiky career-spanning set that also sees them pay homage to Flying Nun legends The Clean courtesy of a note-perfect rendition of their 1981 single 'Tally Ho'.

Over in the merch tent, Jyoti Mishra, aka White Town, is entertaining a small but growing gathering of songs from his extensive back catalogue including 1998's 'Your Woman', still one of the finest number one singles in UK chart history.

Recent Heavenly Recordings signing Anna Burch provides the calm before the storm, literally. Her kooky, indie-folk is reminiscent of a young Cat Power or Juliana Hatfield, even if she makes the faux pas of calling the festival "twee" near the end. 2018 also promises to be the year Haiku Salut crack the mainstream, and with third album There Is No Elsewhere set to drop in September, their eloquent brand of post-rock, electronica, and dance-infused chamber pop is a winner, even if the heavens open once more at the tail end of the set.

As the weekend and another Indietracks draws to a close, it's left to two very disparate acts to channel the spirit of the festival while providing two of its most memorable highlights. Despite arriving onsite late due to transportation issues, Gwenno illuminates a murky Sunday evening with a sparkling set conjured up mostly from this year's excellent Le Kov. Commanding the stage respectfully, her blend of electronic dream pop married with lyrics spoken only in Cornish or Welsh goes down a treat, especially closing number 'Eus Keus?' which she explains beforehand is actually a song about cheese.

While Australian outfit Even As We Speak might come from the opposite end of the musical spectrum having initially formed in 1986 and been part of the Sarah Records stable at the height of the label's popularity, they turn back the clock in impeccable style with a set that sees newer compositions 'Clouds' and 'Slugman' slot effortlessly alongside the more familiar likes of 'Nothing Ever Happens' and 'Blue Suburban Skies' that's as good a way as any to bring the 2018 edition of Indietracks to an apposite close. 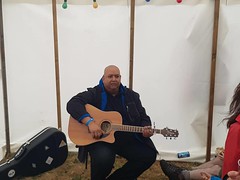 Indietracks takes place late July at the Midland Railway Heritage Centre at Butterley in Derbyshire. For more information about the festival, including dates and tickets for 2019, please visit their official website.