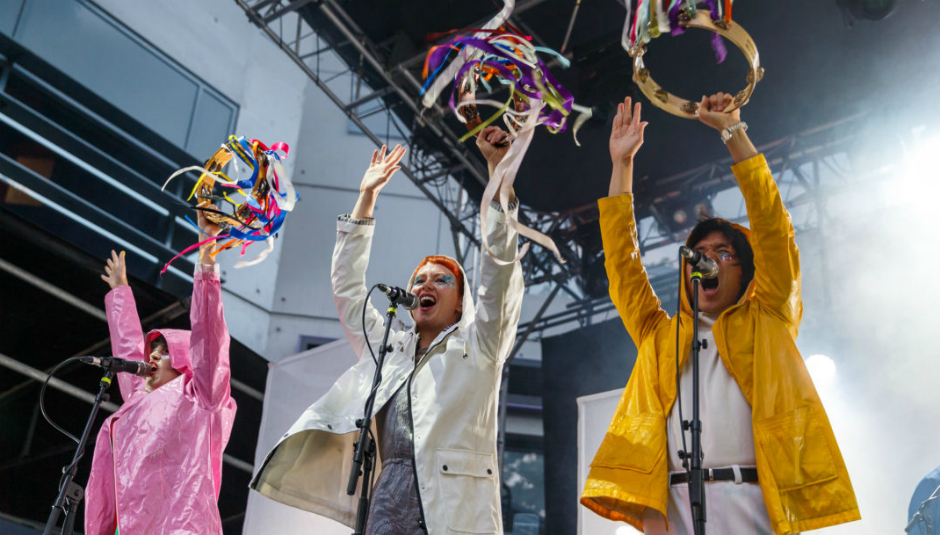 In the south of France — in the home of Michelin — is the Michelin-star festival that blends together a wide troupe of eclectic, underground European talent, billed alongside leading French pop-acts. It’s a heady, yet bizarre mix that somehow works. Nestled in the little ruby-town of Clermont-Ferrand, Europavox is a pan-European celebration of international talent. Set up with two outdoor stages, and one club-like, cavernous bar, the festival plays off its eccentricities, as the chart-topping French pop-duo of Brigette on the main stage are promptly followed by the sexually-charged (and confusing), expletive-ridden agro-techno-rap of Estonia’s Tommy Cash. With a lot to discover, and be impressed by, DiS took the opportunity to instead share the best five bands from this summer’s jaunt in the French wilderness.

Within the space of a year, the colourful and wild meta-pop sounds of Superorganism have quickly turned into an infectious digit-plague, turning everyday music listeners into crazed fans. There’s something about this band I really want to dislike. They’re young, good-looking, colourful, and joyful. There’s the dancing, visual backing displays of spaceships, and floating whales; songs about shrimps, and Tokyo. And did I mention they were young? Arriving on stage in matching, multi-coloured raincoats, and bursting out into the lead single 'It’s All Good', the international super-troupe of harmonic superstars turn the French crowd into new cult followers for their ever-growing fan collective. Like The Flaming Lips for a new and less pretentious generation, Superorganism’s kitchy, wistful pop, 8-bit songs, and pop-melodies, are extremely difficult to dislike. Just as the crowd at Clermont-Ferrand can attest to.

Like an atomic-detonation of post-punk-rock, united by three French musician at the top of their musical prowess, forged through a schooling of Fugazi showmanship. As the show starts, the trio on-stage start off by facing each other, watching each other’s performance to stay in tune - as if their fuzed-noise-sound is more ad-lib than planned. As the show careers onward, the band members distance themselves from each other; the guitarist is on the floor, rolling around in a sea of reverb, while the bass player has taken to playing in the crowd, subjecting the stage to as much inflicted feedback as possible. The manic explosion of cathartic noise is matched by that of the strobe lights, heaving sweat induced energy of the band, and the rolling sonic-punches that land after each riff, is followed by yet another, and another, and another. For fans of At The Drive-In and their ilk, this is definitely a band to pay closer attention to, although remember that safety-earplugs are advised before getting too close.

I’m still trying to figure out what it is that’s most alluring about Estonian rap superstar Tommy Cash. Is it his East European pronunciations of degenerative rap vernacular? (Surely that should be "rapnacular"?). Is it his use of cliched 90s pop music (and Enya) in his songs? Is it is androgynous look, with his ripped figure, thin moustache, and furry-toy-tiger rucksack on his back? It’s a mixture of all these things. He makes songs like 'Pussy Money Weed' sound cute, like he’s using it to disarm us before he comes on with some of the more heavier stuff. A masterful performer, and smooth controller of the crowd.

This Lithuanian trio have surely been eating John Zorn records for breakfast, lunch, and dinner. And probably dessert too. The guitar, drums, and sax trio fit into the tidy, and tiny category of East European avant-garde, free-jazz metal. At the centre of the act is the sax player, whose sound is chained through multiple effects processes and reverb units. Creating a mixture of harmonic and bass-heavy lines, he’s then followed by interchanging finger-picking through to crunching metal riffs on the guitar. There is no structure, and nothing is the same, with songs ranging from drifting, obscure progressions, to brief Zorn-like metal stabs, emphasising their 'shock' value. A band of incredible talent, and adept understanding of timing, it’s always pleasing (and weirdly fascinating) to not only know that these bands exist, but that they decide to play their music to new crowds, and that people book them.

Having caught this Croatian band at last year’s iteration of Europavox, I was impressed by their musicianship but let down by their songs. They were the epitome of modern-day Wild Stallions; all heart, but no end result. And like their respective movie peers, it appears as if this Balkan trio went off into the desert to practice, rehearse, and write, totally modernising their sound from being a high-school battle-of-the-band wannabe act to a well oiled, post-grunge outfit replete with tight riffs, crunching songs, and a certain 'roar'. Still painting their young demeanour, Them Moose Rush, are turning from boys to men before our very ears, with neat songwriting, time changes, and full-on rock showmanship. If you’re still checking the 90s rock Spotify playlists every now and then (and really, who isn’t?), then spare a minute or two for these there.

Europavox takes place at the end of June in Clermont-Ferrand. For more information about the festival, including dates and tickets for the 2019 edition, please visit their offcial website.