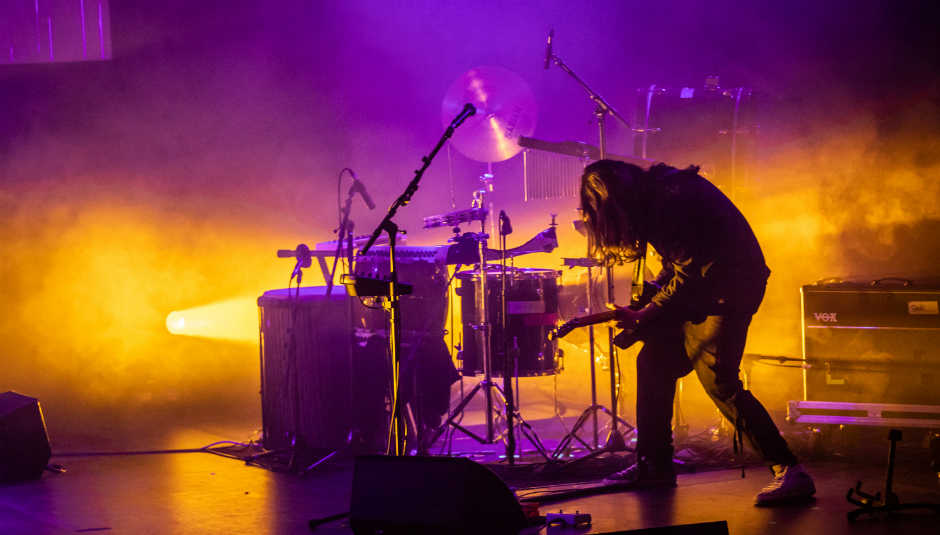 “Music made for the future” is quite the billing, even by Meltdown standards, but then there is nothing normal about JoyCut, a trio from Bologna who’ve been crafting soaring post-rock and darkwave soundscapes for a decade. They adhere to the digital mantra of #JoyCutNeverStops, aiming to be the first band to play every single country on every single continent. Their last record was a fifteen-track concept album split into three suites. And their most recent project was a performance at the Venice Biennale of a six-act “opera” inspired by their travels in the Far East.

So what of this “future” they soundtrack? It’s ominous and foreboding, but not without hope. Nor without humanity, for there’s an organic warmth to their industrial drones and sprawling electro. They open with a one-two punch that showcases what makes them great; ‘Wireless’ is an energized, sprawling beast, glittering keys and synth washes set over a pounding backbeat, while ‘Dominio’ sounds glitchy and anxious, fraught with nervous tension.

There’s something tribal about the way Gael Califano and Christian Montanarella power these songs, beating their respective drum kits into submission. Rhythm is key to what they do, and there are elements of Neu! and Faust in the motoric grooves. The pace rarely lets up for the first hour, and yet just occasionally the band dial back the intensity to reveal a more melodic side; while most songs build into a cacophony of noise, others – like ‘ChildrenInLove’ – float along like a dream. Even the space rock pomp of ‘DarkStar’ pauses intermittently to stretch out to the stars, possessed of a haunting, ethereal beauty.

Flanked by the two drummers, frontman Pasco Pezillo works various synths, laptops, and boxes, prodding and coaxing them to do his bidding. We’re mostly treated to songs from their last record, 2013’s PiecesOfUsWereLeftOnTheGround, but ‘Deus’ – from Ghost Trees Where To Disappear – sees Pezillo on effect-heavy guitar and vocals. It’s a nod to their past, and reminiscent of Mogwai or Godspeed You! Black Emperor at their finest. The rich, sonic maelstrom and widescreen grandeur suit them so well it’s a wonder they’ve ditched it in favour of propulsive, frenetic electronica. But JoyCut have always wanted to push forward and evolve, challenging themselves as much as their listeners.

Which brings us to their encore, and a new suite of songs slated for release later this year. Titled Komorebi, it’s what they debuted at the Venice Biennale earlier this year. “Orchestral breaths, rhythmic experiments and long sound saturations,” Pezillo told us earlier this month, and he’s not wrong; there’s a more experimental edge to them, sonic flights of fancy that ebb and flow and sound more intricate than anything they’ve done before. They round off with a crushingly beautiful, heartfelt version of The Cure’s ‘The Hanging Garden’ before deservedly basking in a standing ovation. If the future sounds like this, then we’re in for a treat.