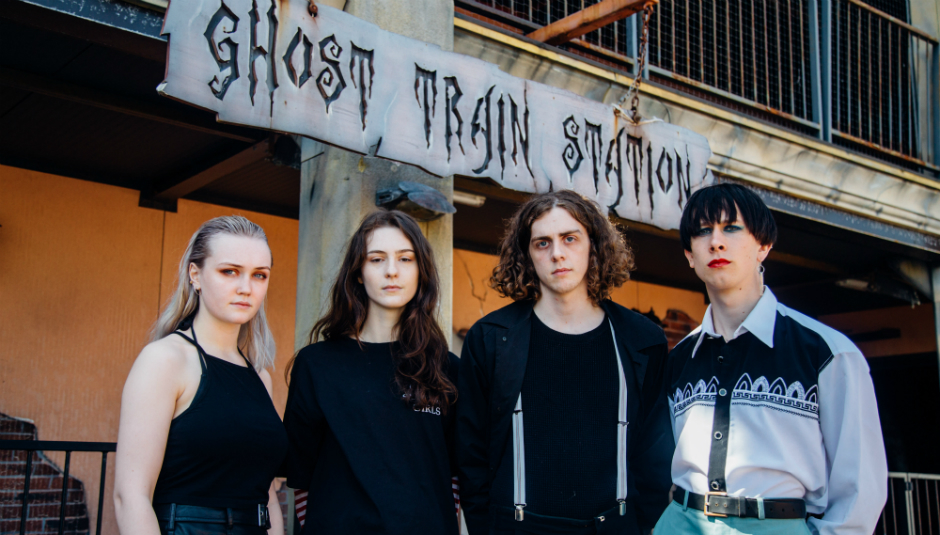 If The Ninth Wave are still being presented as a new band around various UK publications, it’s a cap that increasingly doesn’t fit. Not because they’ve been knocking around for ages – though all four members talk openly about past lives in various corners of the Glasgow scene, the band only started releasing music last year – but because they already feel like a significant band on the cultural radar. They’ve got the fury of IDLES, the post-punk snarl of Magazine, but also the occasional goth-pop sheen that shifts them into Pale Waves territory. In short, it feels like a winning combination.

Certainly watching them on stage at Brighton’s The Great Escape, there’s a feeling of precarious balance between the four members. Vocalists Haydn Park-Patterson and Millie Kidd are a dynamic front two, with Louise MacLennan and Lewis Tollan mostly keeping the chaos together – until the end, when everything seems to coalesce into a divine, thrashing squall.

Perhaps the most hotly-tipped act from an exciting new generation of Scottish bands, The Ninth Wave feel ready to step up. These songs are ready for bigger venues, not least the coruscating ‘New Kind of Ego’, which goes beyond filling the room to expanding beyond it. We caught the band straight after the set to find out how it all came together.

DiS: I’ve heard the Glasgow music scene’s very communal. Did you all come from different bands?

Haydn Park-Patterson: It’s a bit of both. Everyone in Glasgow’s in five or six bands, so it overlaps quite a lot anyway! When it works, it works.

Do you think the city’s thriving now because there’s less pressure to move away in the streaming age?

Lewis Tollan: It’s changed massively. If you want to go to London, you can easily just rent a van and head down there. But it feels like there’s something more creative happening in Glasgow, because it’s not expensive to live there, and there’s so much more time to work on it. If you’re a band in London, you just get thrown onto the stage and that’s it, you’re kind of done. So we have bands who have the chance to grow and develop here.

Did you all know you wanted to nail down this post-punk sound before you came together?

HPP: I wouldn’t say we’ve got it nailed down. Six months ago we were playing quite different stuff, and the songs we’re writing now are quite different again. We just want to keep evolving.

Millie Kidd: Six months ago I was playing folk…

Presumably there must be a lot of different influences in there.

Louise MacLennan: I think that’s why we’re always changing and adapting, because we all have such a range of influences; there’s isn’t just one set genre that we all listen to. We’ll listen to absolutely everything, then take all the best parts and mash it into what we think sounds good. But yeah, I think most people listen to a variety of different music anyway.

Did you get a lot out of recording with [Pixies producer] Dan Austin?

HPP: Well, it was the first time we were in a million-pound studio with a million-pound producer, so yeah! It was a crazy situation. I remember looking at his credits and thinking, “What the fuck!” Then showing up at his studio, he’s this completely normal guy. But when we make a song now, we make it how he would see it. He’s not just a producer – he didn’t just come in, do his part, and fuck off. He’s into the band, and we’ve done all our recordings with him. So he’s almost part of the band, that sound that he’s brought in.

Austin put a lot of himself into the process?

HPP: Yeah, I mean, he would often be there from eight in the morning till one in the morning, doing that for 14 days. So he’s properly committed. He wasn’t fucking off to dinner and charging us for it!

What’s next for the band then? Are you thinking about a debut album yet?

MK: We’ve got a lot up our sleeves…

For more information about The Ninth Wave, including forthcoming tour dates, please visit their official website.

How To Organise A Music Festival #16: Rebellion