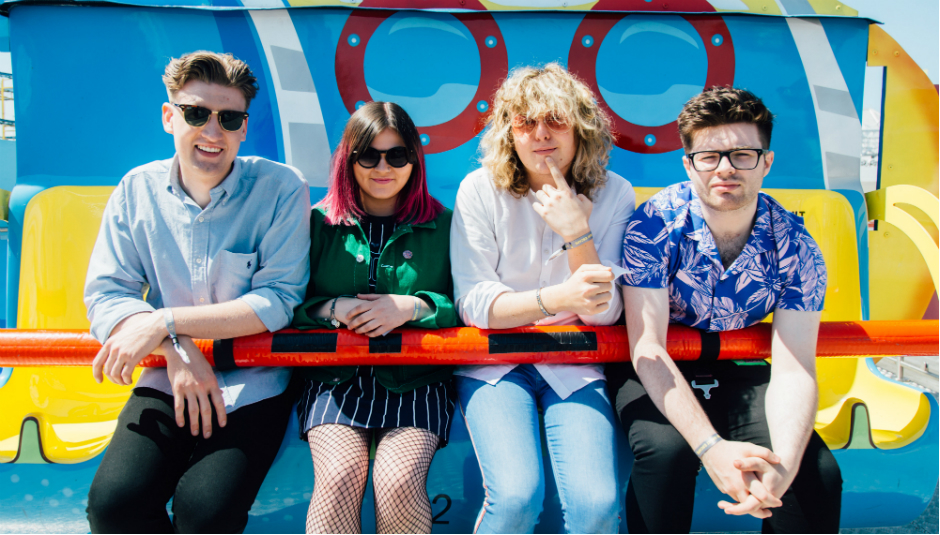 Amongst a hotbed of young talent in Scotland right now, Paisley quartet The Vegan Leather stick out not just for their ultra-on-trend band name, but for their willingness to engage directly with the increasingly absurd world in which they find themselves. Take recent single ‘I Take American’, an unapologetic sideswipe at the encroaching dominance of US media and artists into the lives of the rest of the world. For an early release, it’s a bold statement to make.

They just got finished playing as part of the bustling Creative Scotland showcase at Brighton’s The Great Escape, which also proudly featured stunning sets by acts including The Spook School and Bossy Love. It marked one of the biggest shows and longest journeys to date for The Vegan Leather, something we spoke about just days later.

DiS: Your newest single 'I Take American' is about the US' power and influence over other cultures. Do you feel that too many bands from the UK are too influenced by American artists? There must be a lot of American acts that you admire?

Gianluca Bernacchi: If artists are feeling the vibe and style that American artists are putting out I don't see anything wrong with that, as long they’re keeping true to what kind of art they want to create rather than just making music in a certain way and style to fit in. And yes we do admire a lot of American bands: Arcade Fire, Anderson .Paak, Death Grips, and always the eternal Slipknot.

Matthew McGoldrick: I do think sometimes our Scottish brogue pierces through in our vocals in our music, but we like a whole variety of different types of music from different countries and cultures so it’s not a subconscious thing that we do. If people pick up on it, that's of their own volition.

Duncan Carswell: We are extremely proud of our Scottish roots though. Being from Paisley and having artists like Gerry Rafferty and Paolo Nutini come from our town is great thing to reflect on and hopefully in the future, aspire to be as successful as them.

MM: And the idea of is there such a thing as a Scottish band? I think yes if you’re playing Scottish folk music you can be popped into that category, but if you look at bands like Franz Ferdinand, Biffy Clyro, or even Paolo Nutini, their music spans many genres – you can’t really just label them a Scottish band in my opinion.

You've already shown that you're not scared of referencing political subjects in your songs. Do you think it's important to write about the world that exists outside your own bubble?

Marie Collins: It just happens that we do tend to write a bit about what’s happening in the world; we just write about what we feel like and what is important to us. We aren’t a political band as such, we just have a desire to write about things that we feel strongly about, like love, war, domestic violence, and whatever we like.

You describe yourselves as “art pop” on your social media. Who do you see as your primary influences? Are there artists that you're into that might surprise us? Do you all bring different tastes to the group?

GB: I think we all bring many different types of musical backgrounds to the table; we secretly are all massive metalheads at heart. *MM: Damn right.

MC: I come from more of a folk background and it’s really exciting to work with more electronic elements as I’ve grown with the band.

MM: We are all from a variety of different musical backgrounds, I was big on my jazz when I was picking up bass so I hope that kind of shines through in our music. Duncan with his big fat drum chops brings another element to band, but at the end of the day we do always like to fall into a pop sensibility. We love big pop songs from all eras of music. We’re big admirers of Bowie, Talking Heads, Queen, Blondie, and bands of that ilk. We love big pop songs that slap.

Where did the band name come from? Any vegans in the group?

DC: Haha, sadly no vegans here, me and Matthew are filthy carnivores.

MM: Yes, Marie and Gian are so much more sensible than us. Big veggies. Maybe one day though.

GB: The name actually came from a pair of trousers I used to wear. Big, tight, fake leather trousers. So I then DJed under the name The Vegan Leather and when the band started to grow from the DJ set the name just stuck.

Do you write collaboratively? Is there a primary lyricist in the group?

MC: We’re very much a collaborative band. We all bring things to the table and work on everything as a group, whether that’s being two at once, then the rest of the band comes in later, it’s always a group effort.

I believe you self-produced 'I Take American' – is that something you want to retain control of? Was it true of the previous singles? What are the benefits of staying DIY? Are there producers you'd like to work with?

MM: We love being able to have that control. The mix we have for our tracks is as important as the music itself. If we can’t create the right atmosphere in the track, the right ebbs and flows, then the track is going to sound limp and not like us at all.

DC: And yeah all previous singles were done the same way. We record the demos in the home studio, then pop into Lewis Andrew from White’s studio and get it radio ready and just right for the masses.

MC: Also being DIY does really help keep the costs down, if we have all we need at our fingertips it helps the writing process go so much faster.

GB: In terms of producers we haven’t really thought about that, we’ve just been enjoying doing it the way we have done the last three singles. We are open to it, so if any big producers are reading this right now, call us!

Is it true that The Great Escape will be your first show in England? Do you do anything different for festival audiences?

MC: Actually we’ve played in England a few times now, last year at Kendall Calling and just a few weeks ago in Newcastle for Hit The North. But it’s certainly the farthest south we’ve been.

MM: I plan on getting the guns out and getting a nice healthy tan on Brighton Pier.

DC: Yeah same. Get some pints and ice cream.

GB: In terms of anything special, we like to bring something special to any gig we play. We love spontaneity and whatever feels right in the moment.

You go back to Scotland after TGE to record your debut album. Are you producing that yourselves too? Where are you recording? Any idea on album title or release date yet?

MM: It has no title yet, or release date, we’re still early on in the process of getting everything down.

GB: Early next year is looking like a shout.

DC: And producing wise, yeah looks like it. I don't wanna share too much about it though. If you don't have TVL Red Level Clearance you aren’t allowed to know anything, or we’ll have to kill you.

What music are you currently obsessed with?

MC: Really feeling Sylvan Esso, and Confidence Man have been excellent with their debut album.

DC: Anderson .Paak, Frank Ocean and a lot of We Were Promised Jetpacks,

‘I Take American’ is out now. For more information about The Vegan Leather, please visit their Facebook page.