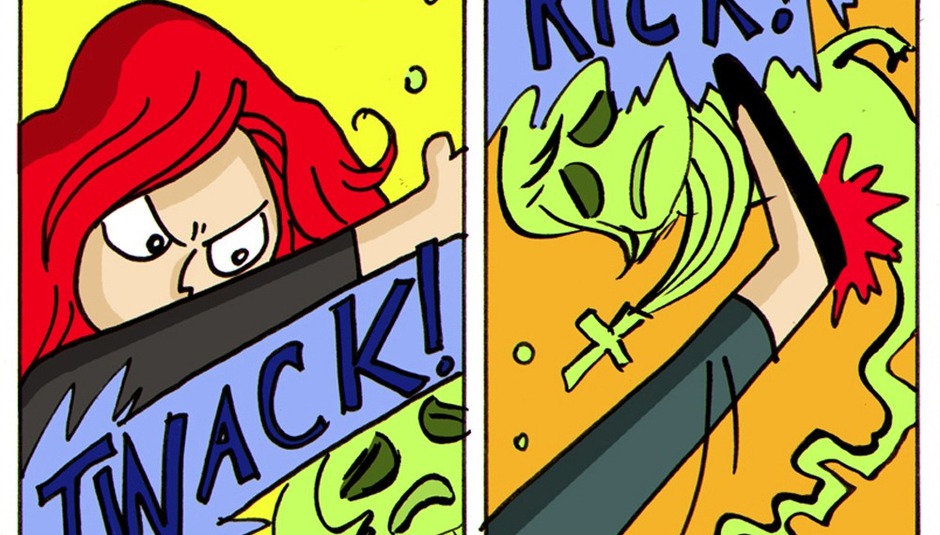 For many years, peer-to-peer file-sharing networks, Rapidshare, MP3 blogs, MySpace, and now streaming services like Spotify and Soundcloud, have made is rather easy to listen to a band without giving them anything - not even a penny - for their creativity. Some idiots on their high horses have even burbled that music shouldn't really be a career choice... 'Shut up yeah? You can't expect to make any money, just accept the circumstances, bucko!' is more or less what you read on messageboards and in blogposts. Bands, you should just shut up, be thankful you can even afford an instrument and make whatever money you can from gigs and merch, etc, etc.^

Throughout the ages, backing creative people into corners and setting them problems to solve has resulted in some interesting solutions. For musicians in the 21st Century, it's no different. How do acts bring in some money to cover the costs of recording, those rehearsals or simply making merch in the first place? For more established acts, the process of 'diversification' has led to bands brewing their own beers, making speciality teas, and Blur's Alex James making some cheese, whilst the likes of Rammstein and Dave Stewart flogged some sex toys. For every James Murphy with a coffee, there's a sense of confused commerce in music's underground. For every "oh yeah, that makes sense", there's another press release about a musicians production that has more than a smidgeon of desperation when you read between the lines... and then we got this nice email from Her Name is Calla, who played our stage at Summer Sundae last year about something they're involved in, primarily for fun (and if anyone buys it, it's a bonus...):

"...the awesome illustrator Rachael Smith drew Her name is Calla and created a comedy-horror comic about us! It's available now from Orbital (London), Forbidden Planet (Leicester, Leeds, Glasgow, Birmingham) Travelling Man (York, Newcastle, Manchester, Leeds) and several other comic shops across the country, and online here."

The comic is named The Way We Write and it's the full-length comic book debut by Leicester illustrator, Rachael Smith. The comic follows Her name is Calla as they battle ghosts and writer’s block in a haunted house. It looks like this: We had a quick chat with the band to find out more:

DiS: If you were a comic book super-hero, what special power would you like?

Adam (Drums): It'd be something really slight I think- like knowing when James Corden is going to appear on any medium 5 minutes in advance so I can leave the room or hurl the telly into a fire.

Sophie (Violin): Tough question! I think my super power would probably be wiggling my nose and my room's tidy - nothing too dramatic!

DIS: Is there anything about your comic book character doesn't reflect the real you?

Adam: He gets noticed for being in the band!

DiS: How did the comic book come about?

Sophie: The comic comes from a long line of our fans doing totally amazing things for us! We've had so many awesome things made for us over the years from fans, including incredibly powerful videos from Broken Pixel and Ana Stefaniak (who both won awards off the back of their videos) to this comic, which we thought was such a cool idea and executed absolutely perfectly by the lovely and very talented Rachael Smith, who is a Leicester based artist who makes these gorgeous looking comics. I can't exactly remember how it all got started, but we know Rachael from our shared Leicester connection, and I think one day we all saw these drawings she'd done of us and the idea just snowballed into this amazing comic!

To celebrate the comic's release the band have set live a track which was recorded by Keith Jobey at Summer Sundae Festival, when the band played the DiS stage. It's called 'Meridian Arc' and is taken from the forthcoming third album:

DiScuss: Did anyone buy Gerard Way's comic book? Can anything save the music industry? Is it passed saving? Or the same as it ever was?

^ = of course, much of this talk of the music business being broken is actually about the record business, and yet Adele, Gaga, Katy Perry, et al continue to sell a crapload of records. Every era has superstars, it's just that now there are a helluva lot more people who think they should be able to eke out a living, whilst getting high on "impressive" playcounts and 20 minutes of blog-buzz... For every tale of Justin Bieber becoming a phenomenon because of YouTube, there are another million YouTubes being uploaded, etc.