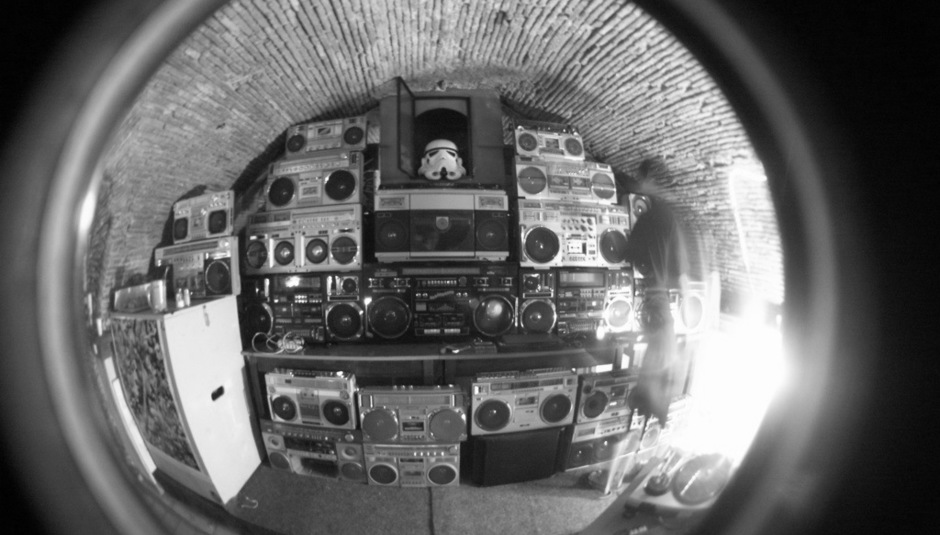 DiS' editor shares some music has been lovin' recently...

Seeing as my Five-4-Friday hasn't happened the past two weeks (blame Live at Leeds, Camden Crawl and Great Escape ), so this week I thought I'd collect together a heap of things I've been listening to and loving, that have either hit my inbox or been spaffed about on my social network feeds. This mixture of videos and SoundClouds and stuff and things, all probably vaguely suffering from drizzle-misery, with a slice of a heart-ache cake on the side...

Firstly, let's get you loaded up with DiS' May Spotify Playlist...

A post-clubstep collaboration. Yeah, clubstep - it's like that hungover waddle that some people do at sunrise, half-drunk, half-awake... This EP is gorgeous, like M83 and Zomby rutting in your living room and then writing a post-coital symphony... Thanks to Bronya from Notion for tipping me off about this.

He's only gone and signed to Gold Panda's NoTown label, and announced a new EP entitled Modern Driveway which is coming out on 28th May 2012. Here is a song from it:

Speaking of Derwin (as that's what your mum calls him...), he's got a new single on the way too which slinked onto the web last week. It's already available to buy digitally but there will be a 7” version available June 11th/12th from Ghostly International worldwide and Notown in the UK. If you didn't know, Gold Panda is playing the DiS stage at Summer Sundae.

I also quite liked this recent Night Works remix that he did...

With remixes of Radiohead, UNKLE, Ghostpoet and The Weeknd, under their shiny space-belt, London's EO now has a debut single coming out at the end of May. It's very 'night-bus'. Can someone make me a "Night-bus will never die, but you will..." t-shirt please?

Whilst we're vibin' to lots of this ambient-indebted lush dance-music-you-can't-really-dance-to, here's something that literally just hit my inbox from Japan...

Joel Ford, the dude from Ford & Lopatin that isn't Oneohtrix Point Never has a new project named Airbird, which is pretty schweeet! Shall we call this Diva-fi...? The 'Trust' EP is out on May 28th via Software/Mexican Summer, and here's a taste of it...

Speaking of side-project-y projects, those two chaps from Walls seem to be more like a fully-formed band in their own right now, overshadowing their other guises somewhat. We're pretty sure that you noticed that we loved their album Coracle last year, with all its deepwater tranquil chill with colourful tropical fish swimming through it. Well, they're releasing a remixed version of Coracle via Kompakt at the end of the month, which contains remixes by Jon Tejada, Wolfgang and Reinhard Voigt, Perc, and Holy Other. And we'd presume it might include this...

I got called a Canadaphile for the first time at Great Escape last weekend. It may have had something to do with me talking endlessly about Eight And A Half's set, how great Trust were, how lovely the guy who runs Arts & Crafts is and also telling people to come see husband-wife duo New Look, who once lived in Canada. There were a lot more great Canadians at Great Escape, and they made this mixtape to give us all a taste, which I realise might be a bit late now for you to got see them at Great Escape, but that doesn't mean you can't go check out more about each of these in your own time...

They've snuck back on the scene. Strangely chilled...

They're back too.... don't all bumrush your monitor at once.

Is giving away a new song as a free-mp3 over on the Turnstile website, which he describes thus:

“It’s a song for a man whose lover has died. He remembers a time, before his partner took sick, where everything felt safe and endless. He asks to be taken next, so they can be together again.”

Not a million miles from Perfume Genius is this heart-breaking little ditty from Weikie, who, fact fans, sang on the new Ghosting Season album.

St Vincent & Aaron from The National

Pitchfork popped up this +1 interview with the delightful Annie Clarke and Aaron Dessner from The National.

Chat about their forthcoming album-of-the-year-contender...

And finally, let's leave you with some noise, from a 12" forthcoming on Fear & Records....

DiScuss: What have you been listening to lately?